She's become like one of the family ~
Complete with her own name.

Betsy, as she is affectionately known by many (yes, it's true),
has been faithfully transporting us around for over twelve years now.
We bought her with 47,000 km on the odometer ~ she was seven.

We owned a Jetta prior to acquiring Betsy ~ however,
since it only had five seats, it couldn't accommodate our growing family.
Notice the length of time we've had the van?
It's not a coincidence that Emma is exactly the same age.

Just over two years ago, we added another used vehicle to our fleet.
Up until that time, however, Betsy was the only
means by which we got from A to B.

Well, if you don't include legs,
bicycles, roller blades, or scooters.  She was it. 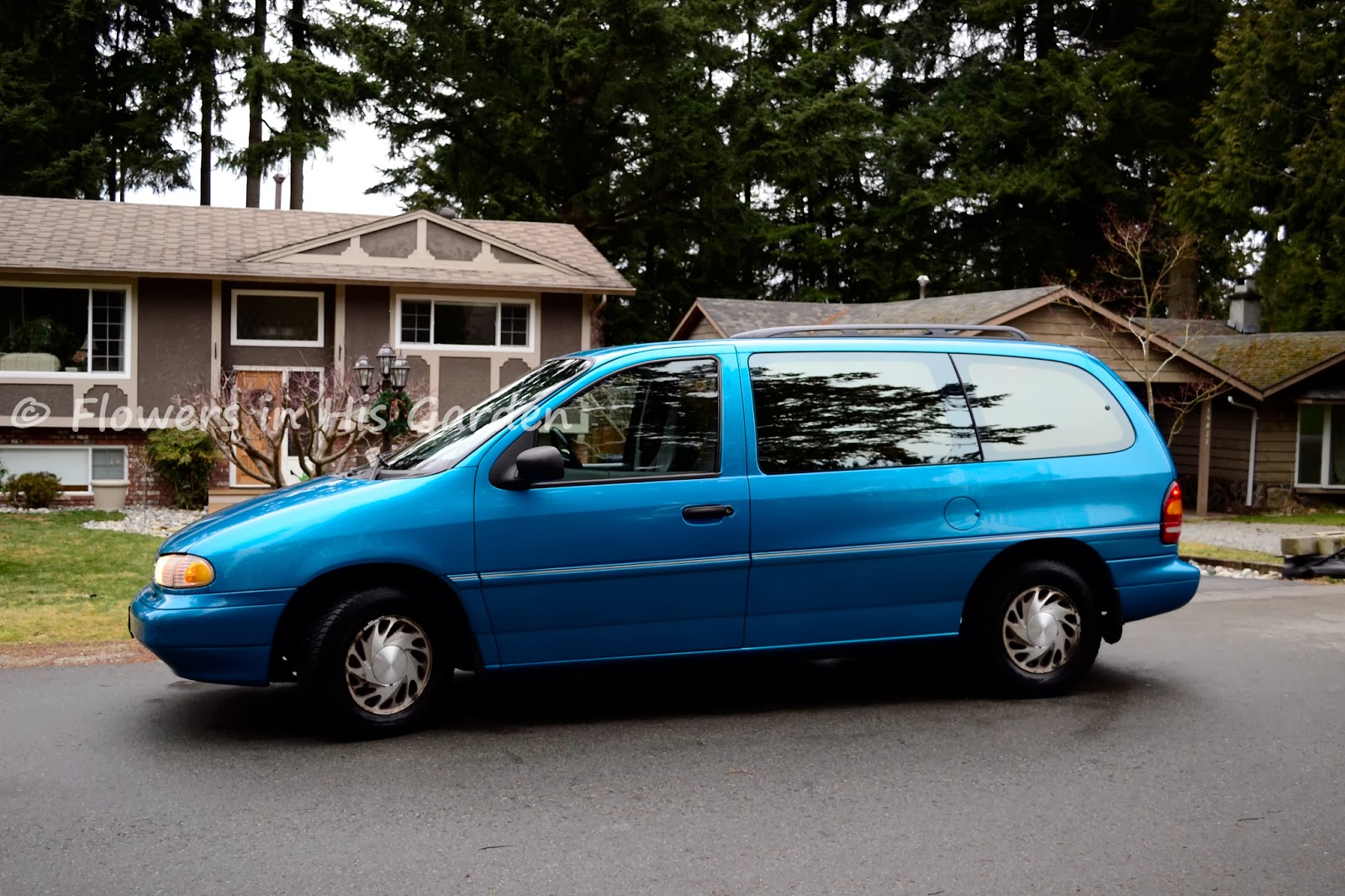 Howie, in particular, is attached.
He is sentimental about all she represents.
And, when it comes right down to it ~ so am I. 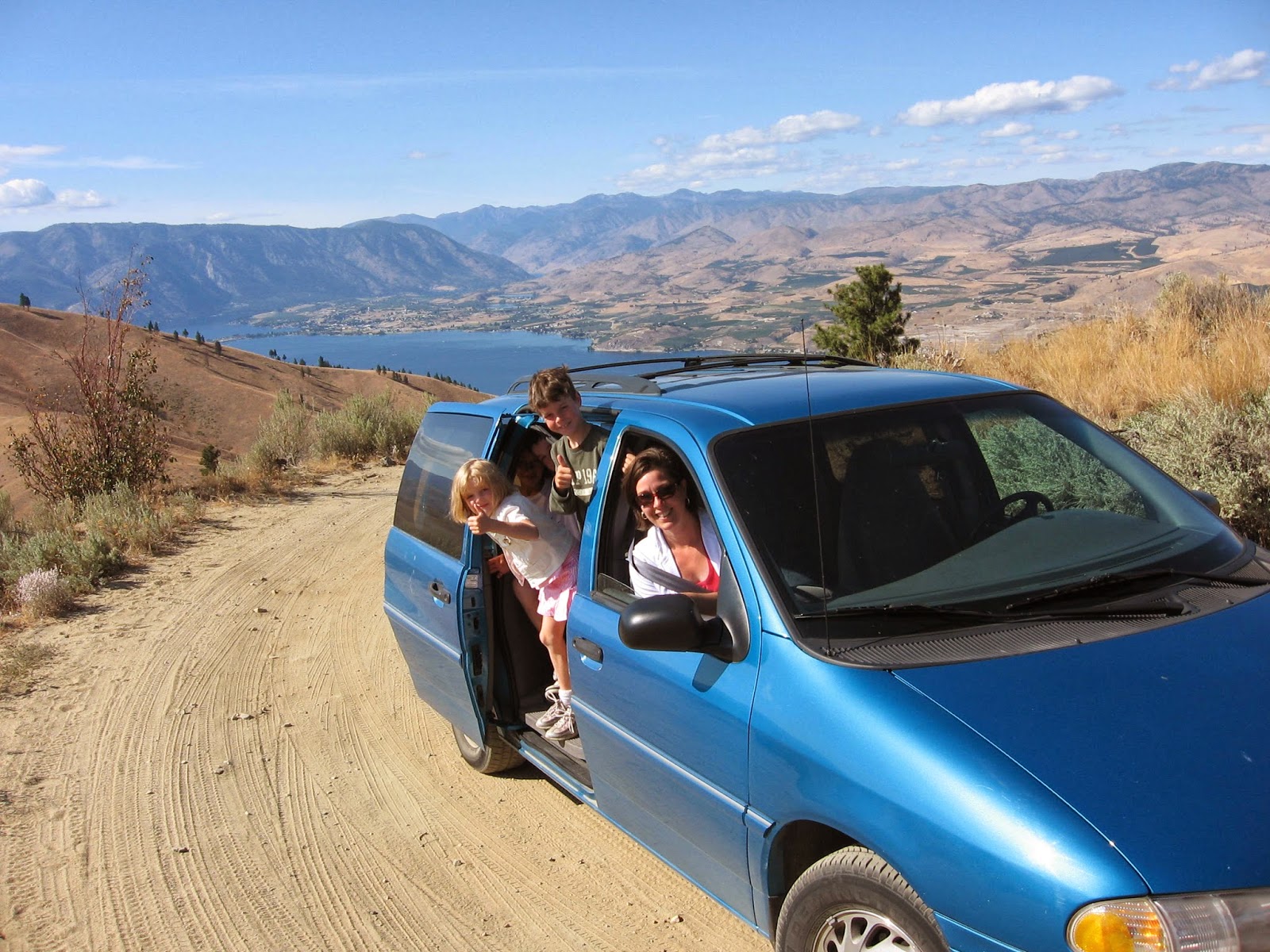 The boys all were loaded up with hockey gear and
transported to and from games many times over the years.
Emma came home from the hospital as an infant in her ~
Betsy was all she ever knew until she was nearly ten. 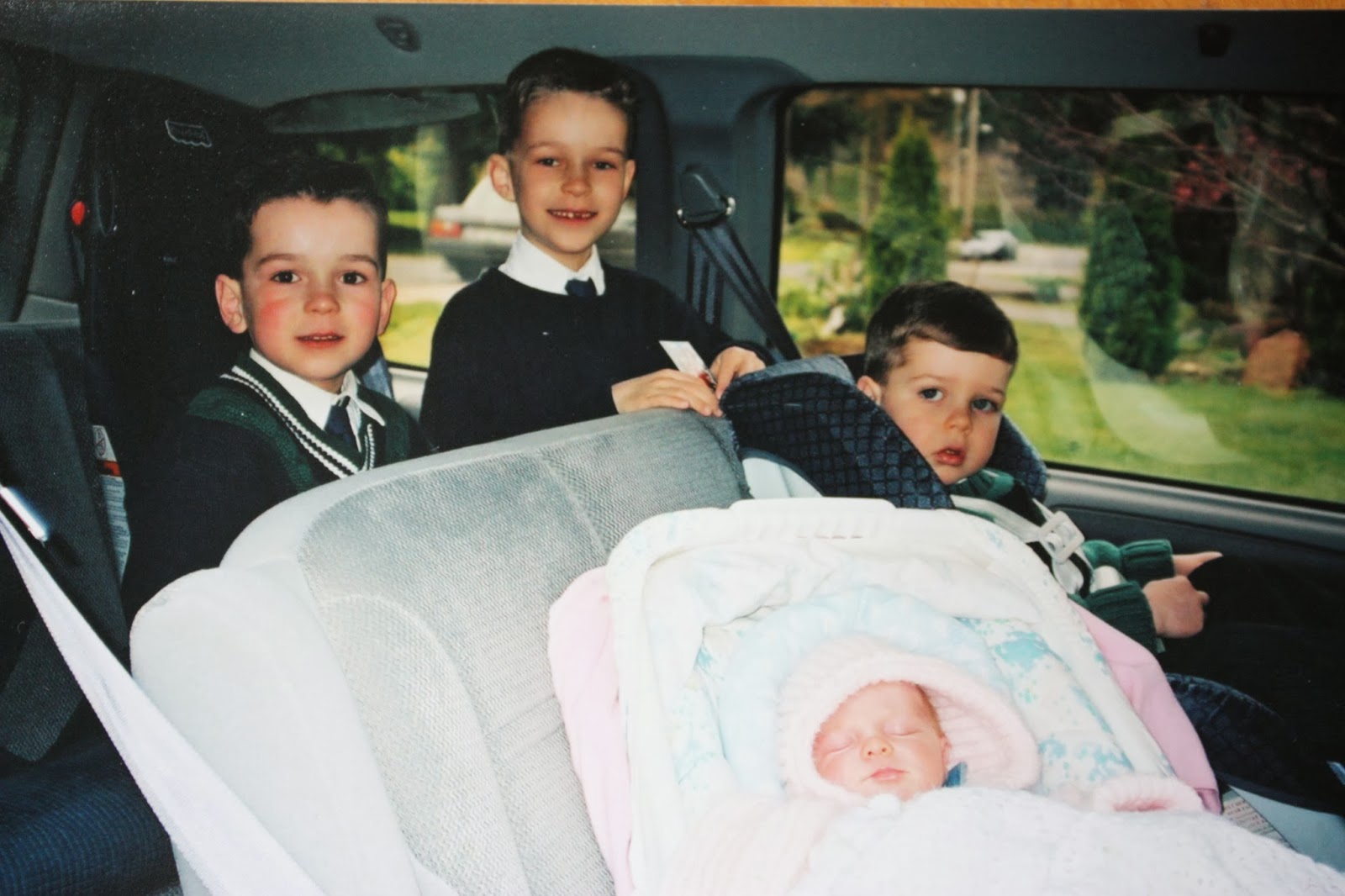 Austin learned to drive on her.

Calvin has been learning to drive on her as well.

There are many benefits to having a vehicle like this up the drive.
But, we don't need two vehicles.  Up until two years ago,
we were a one vehicle family.  It was a good thing.
When it came time to sell her, we discovered that (on Craigslist)
she would only fetch about $500 ~ she was worth more to us than that!

And, at the time, she had almost six months of
pre-paid insurance coverage.
It didn't make sense to sell.  So, we didn't.

It was a blessing, as that was just about the time when we
would benefit from having two vehicles the most.
Austin ended up being admitted to Children's Hospital in heart failure.
Howie and I were able to take shifts between our
oldest son in the hospital, and our three younger children at home.

We often would pass each other going opposite directions on the highway.
He drove Betsy, and I drove the new-to-us vehicle.  Was't that sweet?  :)

Once that crisis was over, we kept Betsy on the road.
Austin got his N, and had the freedom to drive on occasion.
He took his sister and brothers to the library or the book store.
He ran errands and had a little freedom because of Betsy.

If he hadn't been so sick, he would have walked.

Just prior to the acquisition of our new-to-us second van,
we added up all that Betsy had cost us over the years, and we decided...
no more!  It was frightening how much we'd poured into her.
We did, however, put new brakes on after that decision.  Brakes are necessary.

Recently, as we anticipated paying for another year of insurance,
we number crunched and decided that having two vehicles
in our family at this time is an extravagance.  Not a need at all.
So, we put her up for sale on Craigslist.  And, she sold!

It is a bittersweet parting ~ Betsy's been good to us.
But, she no longer is required.  It no longer makes sense to keep her.
We are sad to see her go.  She's been a blessing.

Please tell us all about your own "Betsy" in the comments section
of this post, or on your own blog.  Do let us know if you post about it,
so we can be sure to come by and visit.

We were a one vehicle family up until a little over a year ago. It worked for us until we had baby #4 and needed more room.

It was a sad day when we said good-bye to our first vehicle, strange how attached you can get to an object. :)

I was a toddler when my parents moved out of Canada. I'm curious what the N sticker on a vehicle stands for? This is the first time I have seen something like it.

That's such a sweet story!
I don't have a cute name for my van, but I do have a sweet memory of when we got it.
When my oldest was about 20 months old, we found out we'd be adding two more babies...and two more car seats. My current car wouldn't fit all those car seats, so we started looking at large SUV's and minivans. I was very very resistant to the minivan...because I was very vain and self absorbed (HA!). Anyway, after test driving several big SUV's, I started to realize that it just was not practical for a mommy with 3 small children who would all need help buckling in and such. Anyway, after I tested out the minivan I got very emotional. But my sweet husband, being of more reasonable mind (and not pregnant) said to me "Sarah. This is a GOOD problem to have. Needing a mini van means you have lots of little children. This is what we've prayed for."
So, so true! I totally got over myself after he said that. Now, I love my used van and how good it has been to us. And I realized a car is just something to get you from point A to point B.
How ridiculous I was!! God's still working on me!

Awww...I LOVE the picture of y'all bringing Emma home and all your sweet boys around her! So precious! We haven't named our cars since...the "Marmot Mobile," which I proudly drove until my senior year of high school when it completely tuckered out. It was actually an old Toyota Cressida Station Wagon which had belonged to my parents. They bought it used and mama drove it for soooo long and then it sat in our driveway...until Mama had it made driveable. I learned a lot of lessons while driving the marmot mobile. No ac, the sound system didn't work, so I kept a HUGE boom box on the passenger floorboard. Oh it was always an adventure. The gas gage was broken and the gas filter clogged all the time. Whew. Lots of memories there. :)

I have never named my vehicles but my new daughter-in-law has a name for hers and proceeded to give a name to our son's car as well. I can't remember them though. Glad you have all those sweet pictures as a reminder. Blessings!

Well, we just drove home from Florida in a used vehicle we bought last year... after we said goodbye to "Arvin" ("our van"--the kids named her). Arvin took us to Florida several times and the last two kids came home from the hospital in it. Thankfully, my sister has Arvin now so we don't miss it terribly :)

In summer, 2007, we had to get rid of our Volvo station wagon we'd had 12 years. Phil had a minor accident in it that messed up the front end. It was old. He'd used it for work.Many miles. We'd driven it on family vacations. Kids learned how to drive in it. When we took it to the wrecking yard, after getting it weighed for it's metal, we said goodbye. As I walked away, I looked back at it, with tears in my eyes. Saying good bye to a car, it looked so sad....don't leave me here, it seemed to say! One droopy eye. Memories for sure. Interesting how we get tied to our cars, huh? We bought a nice used car (2005) for Phil to drive. Thanks for sharing!

I can't say I've ever named a car, but my piano and clarinet both have names. :)

I'm sorry about Betsy, but what happened? Did she get adopted by another family? There is something comforting about a faithful car, for sure.

Welcome a Joyful Chaos ~ It's lovely to *meet* you. To answer your question about the N...it's a regulation for our province that all new drivers must display the N until they have two years of practice and another road test behind them. Generally, a full license is not issued until the young person is 19 years old. :)

Dear Sarah ~ What a sweet story! How precious it is that the Lord has given you a husband who knows just what to say! :) And, yes, humbling has taken place in these here parts as well. Sometimes we do just need to get over ourselves, don't we?

Dear Jennifer ~ What a fun story about your first vehicle...the Marmot Mobile...love it!! Fun memories, I am sure. :)

Dear Patty ~ Too fun that your daughter-in-love has named her vehicle as well as your son's...love it! :)

Dear Heather ~ LOL...Arvin is a great name! How wonderful that you were able to travel in your new-to-you vehicle! Yippee for special family times and making new memories! :)

Dear Becky ~ Yes, I hear you on the saying good-bye! It can be emotional as so many memories can be tied up in a vehicle. Sorry you had to leave your Volvo at the wrecker's...sad times! Yippee for a new-to-you vehicle for Phil to drive. :)

Dear Lois ~ I updated the post to answer your question about what happened to Betsy...it's in the last part of the post below the last photo. You named your clarinet and your piano?? Hmmm...I've never thought of naming an instrument...what a fun idea. :)

Wonderful post and wonderful photos too!
A precious story sweet friend!! Praying for you and your family.
Love and hugs,
Linda.