In the summer of 1994, we learned that we were expecting.
Howie and I had been married just three years ~
we couldn't have been more thrilled at the prospect of becoming parents.
Austin would be welcomed into our hearts and home as our first child.
In those days, we didn't find out if we were having a boy or girl.

We wanted to be surprised.

The nine months of pregnancy were uneventful.
I felt well and was able to function normally.  It was such a blessing.
We expected our baby to be healthy ~ there was nothing to indicate otherwise.
Austin was born on April 8, 1995 ~ he weighed in at 8 lbs 13 oz.
At the follow up appointments at the doctor's office,
however, it became apparent that he was not thriving.

He had trouble gaining weight.

When he was six weeks old, it was discovered that he had
been born with a very large hole in his heart ~ a VSD.
Practically no septum existed between the lower two chambers of his heart.
He would need open heart surgery to do the repair.  A patch was required.

However, the surgery was not to take place until the
beginning signs of heart failure were apparent.  It took nearly a year.
For the entire first year of his life, we were seen frequently
by specialists at Children's Hospital and in a pediatrician's office.
He was monitored closely and cared for diligently.  We were thankful. 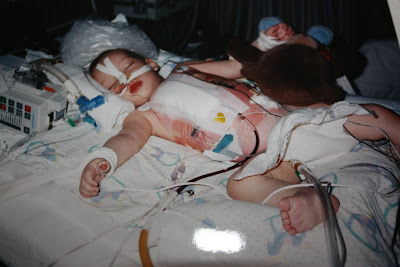 We prayed.  People around the world prayed as well.  The Lord sustained us all.
The work was done and the healing began.  How relieved we were!
Austin had a muscle bundle in the area of the patch that occasionally caused
the electrical impulses to be interrupted.  He would need a pacemaker.

Again, we prayed.  Again, the Lord's people prayed.
And, once again, Austin was sustained.  The pacemaker was not required.
Or, so it was thought. 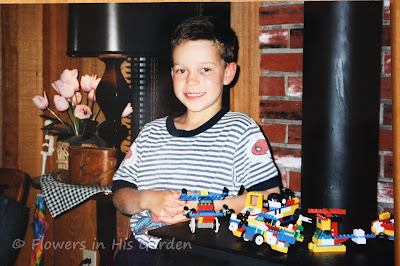 Many years passed.  Many follow-up visits to the heart clinic were logged.
Again and again, he was sent home with a relatively clean bill of health.
He was not to be treated specially.  He was allowed to exercise without restriction.
And, he did.  He played hockey, ran, rode his bike and swam.  He was active.

When he was fifteen, he began to show signs of Crohn's Disease.
The focus shifted from his heart to Crohn's.  And, rightly so.
However, approximately a year prior to the digestive issues manifesting,
his heart was beginning to fail.  We had no idea.  None at all.

To look back on that now can be devastating ~ humanly speaking.
However, God's ways truly are higher than ours.
We rest in His Sovereign purposes.  His perfect plan.

While Crohn's was being dealt with, the heart grew worse.
Much worse.  Critically so.  And, then, we ended up in ICU at Children's
just prior to Austin's 17th birthday.  He was diagnosed with DCM.
It was a dire situation.  And, it hit us like a tonne of bricks.
We were reeling, but, the Lord in His mercy and grace caught us and carried us.

Austin recovered steadily on the outside.  Things were looking good.
However, his heart made no great strides forward toward recovery.
It was too sick and too enlarged.  He needed a pacemaker.
God provided, and he was given a pacemaker in December 2012.
The hope was that it would help his heart to recover some of its function.
It was not to be.  It was not in the Lord's perfect plan. 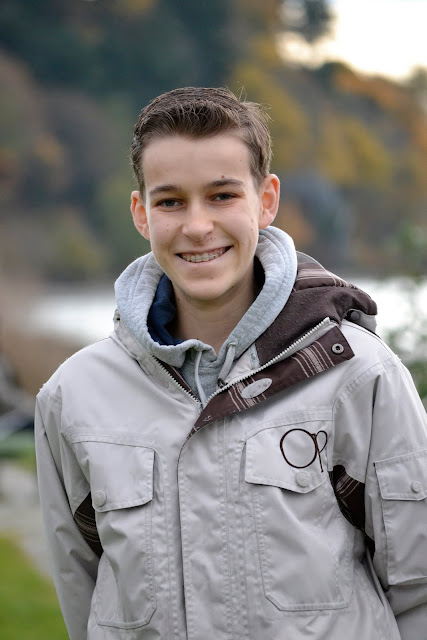 We know that our God is great and does all things well.
His promises are sure and true.  We love His Word.
It is such a comfort to our grieving hearts.
Only in eternity will we fully understand the whys behind this story.
However, it is not something we must know now.

Our greatest desire for each of our children is that they would
surrender their lives to the Lord Jesus Christ.  That He would be their Saviour.
There is nothing more important to us as parents than to know that they
will go to be with Him when they die.  This is Austin's reality at this very moment.
His testimony was clear.  He was trusting his never dying soul to his Saviour's care.

He is worshiping the Lord in Heaven.  Perfectly.  Without hindrance.
One day, because of God's mercy and grace extended to us through the blood of
the Lord Jesus Christ, we will be called Home to Heaven as well.

At the end of it all, this is all that really matters.
How precious it is to follow our Saviour and rest in His promises.
Austin's favourite Bible verse is such a comfort to the seeking soul ~

"All that the Father giveth me shall come to me;
and him that cometh to me I will in no wise cast out."  John 6:37

Our Great God is Faithful and will always honour the promises He makes.
The message of our Austin's life is this ~ be ready for eternity.
None of us knows when we will be called out of this world and into the next.
The time is now to come to the Lord.  He is merciful.  He will save.

The Lord Jesus said ~ "Come unto me, all ye that labour and are heavy laden,
and I will give you rest.  Take my yoke upon you, and learn of me;
for I am meek and lowly in heart: and ye shall find rest unto your souls.
For my yoke is easy, and my burden is light."  Matthew 11:28-30

**Originally published on my blog as a supplement page ~
It was first published in the Fall of 2014.
Posted by Camille at 31.12.15 Labels: Austin, Austin's Heart, Family, Grieving, Mothering