We have lived on our street for over 17 years.
When the children were little, I observed the paper route
family as they dutifully delivered week after week.

One family was employed by both papers.
They were delivered on the same days to the same homes.  I was intrigued.
As they passed by our home, on occasion, I let it be known
that if they were ever going to give up the route,
we would be interested.

At the time, our children were very young.
If I remember correctly, Emma was just a newborn.
She may not even have been a part of the family yet ~ I cannot recall.
But, I could see the potential.  And, I was right! :) 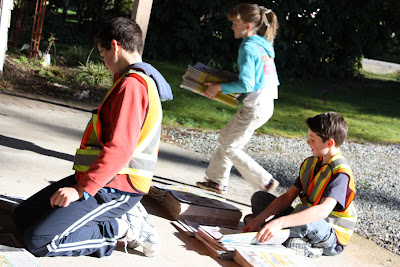 It was something the children and I could do together.
The routes were eventually given up.  But, not to us.
Two papers.  Two different families.

And I was back to square one.

This time around, I called the papers and got my name on the list.
If ever the routes should become vacant, we were in line for the take-over.
It took time.  First, one paper became available.
And then, about six months later, the other one.

Seven years ago this June was when we began.
Austin was 10 years old, Calvin was 8, Fraser was 5,
and Emma was 3.  It was busy. 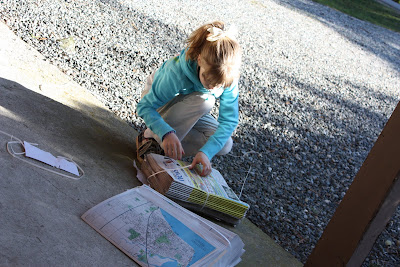 But, we did it.  Together.  The five of us.
Rain, snow, hot sun, and everything in between ~ we delivered.
And we saved.  I paid the children a small amount each time,
and the rest was socked away.

After two years and four months, we had enough money to
go on a family vacation.  All the way to Florida!
The children were very excited that they were able to take
Daddy on a holiday!  Very excited ~ and so was I. :)

(Of course, travel rewards were used and whatever we could
get for *free* was secured ~ BUT ~ the cash portion of the trip
was paid for with our paper route savings). 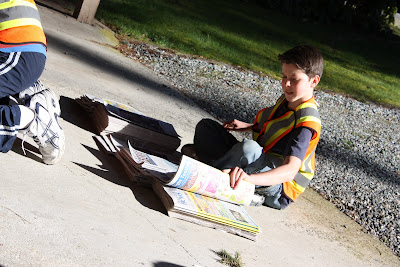 When we arrived home from our holiday, the boys
took over the route as I was no longer needed.
The boys were old enough to do it all by themselves.
Emma was still too little.  Her paper route days were over.

Austin withdrew himself from the roster last summer,
and Emma took his place.  (Thoroughly protected by her brothers, of course)!
She's pleased to be able to earn a little money again.
Actually, it's more than a little.  Since the children do it without my help,
they equally divide the proceeds.  It's a sweet deal. 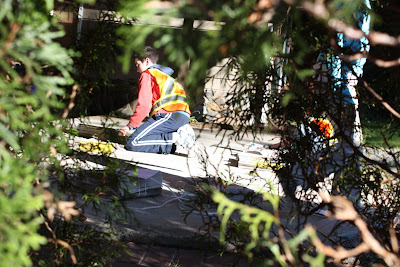 Unfortunately, that means I am out of work.
(Is a Mum every really out of work)?!
Currently, I'm trying to figure out a way to build up my reserves ~ LOL!

Great life lessons to be learned with having a job, even early in life (and early in the day?)
I think you should just enjoy your 'retirement' from the newspaper business! You deserve the rest!
Blessings, friend!
(I continue to pray for Austin and all of your dear family. Hope he is improving a litte more each day.)

You are one awesome mom...I did a paper route with Tianna...but "hated" it....and refused to ever let any of my children ever do it again. Kids hated the dogs and I ended up doing most of the work...driving them. Cost me more on fuel than I got paid LOL.

Continuing to pray for Austin.

..and the same story happens in my family, Camille! Except that mine have, over the years started (with my daily support) perservered for several years doing it by thenselves and one by one given the runs up. Now it's just Cam (12) and just the other day I was asked if I would be available to deliver in my area as they are changing to early morning deliveries here and short of kids to do the paper runs!

Funny how things go round :0)

It is such a wonderful opportunity for your children to have the paper route available. Not much like that available around our area.

Maybe you will have some time to do some of those things you would like to do but have not had time for ~ now that you are out of work!

Blessings to you all.

What a good story. It's an excellent way to teach the children about hard work and saving money. I hope one day I can do the same for my family.

I love how protective your boys are of their sister! :) And what a wonderful way to make some extra money and build family memories all at the same time.

:) ha ha ha! You make me laugh! I am super proud of your kiddos! That's awesome and good character building, too!

Dear Raeann ~ It is the local *free* paper, and as such, is delivered in the afternoon. :) Thank you for praying for us and for your sweet friendship. I am thankful for you!

Dear Connie ~ LOL! Indeed...driving would defeat the purpose of earning money. Dogs are not a fun thing to deal with...I'm with you on that one! Thank you so much for praying...I appreciate you. :)

Dear Julia ~ Dear me! Early morning deliveries is not something we would like. It's a blessing to have the paper route though. Are you going to take on a route?? :)

Dear Patty ~ I'm thankful that we live in an area where the paper route is possible...it is a blessing. Thank you for your kind friendship and encouragement to fill my time *off* with something worthwhile. :)

Dear Tanya ~ I am sure you will! There is plenty of time for those things in the future. Just enjoy these days as they will fly by so quickly! :)

Dear Heather in AZ ~ Yes, memories for sure! LOL! The boys are protective, but they also have had their moments of non-protectiveness too. :)

Dear Jennifer ~ It certainly has been a useful tool in their lives (and mine)! God is so Good to us, isn't He? :)

Blessings to you each one!
In HIS Love,
Camille

My Matt has in the past had a love hate relationship with his paper route, but since he has made a decision to get to know his community the situation changed. Now he sees every home and family as a way to engage and share the love. He often gets choc's or tips from the older folks who like to just have someone to chat too. Little does he realise that he has really made someone's day! In a big way! Your kids are doing an amazing service that will bless them and others in the process. This is how we build community one paper at a time! Praying Austin is getting stronger Camille:) Pippa

Dear Pippa ~ How wonderful it is that your Matt has captured the vision of service with his route! I am sure he is well loved by his customers. We have found over the years that many people enjoy just chatting and visiting with the children...you are right, it does make their day! May each of our young people do their work as unto the Lord. He is a wonderful Master! :)

Thank you SO much for praying for Austin! Day by day...with the Lord ~ HE truly does all things well.

Blessings to you my friend!
Love, Camille

Camille,
We too enjoy the little extra money generated by our paper route. I still go along with my kids, but am hoping they will soon do it on their own. We are also on the waiting list and are patiently waiting for the mirror route for the other paper to become available. Thanks for turning me on to that idea when we chatted a year or two ago about such things.
Blessings,
Natasha

Dear Natasha ~ It's a lovely thing to go on the route with the children. They grow up waaay too quickly for this Mummy...I know you aren't rushing it...enjoy each stage! I hope you get that extra paper soon. Oh, and did I mention that you should ask for a raise? :)

Blessings to you!
Camille