Don't miss this!
There is to be a creation/evolution debate between Ken Ham and Bill Nye.
It's being touted by some as the debate of the decade.

Click here to learn more.
You can sign up for the live streaming broadcast,
or pre-order the DVD by following the link above.

If you have trouble opening the first link I provided,
click here to get to the Answers in Genesis home page.
The debate is advertised on the right with an image like the one shown below. 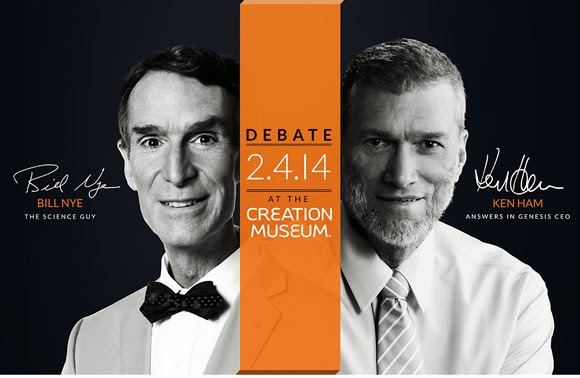 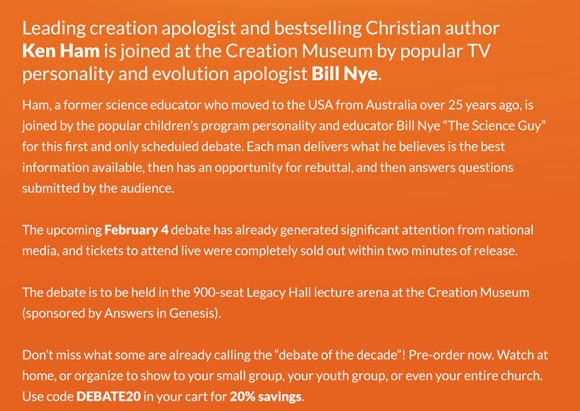 Let's also remember to pray.
This is a spiritual battle.  It is not a battle of wits.

"For we wrestle not against flesh and blood, but against principalities,
against powers, against the rulers of the darkness of this world,
against spiritual wickedness in high places.
Wherefore take unto you the whole armour of God,
that ye may be able to withstand in the evil day, and, having done all, to stand....
Praying always with all prayer and supplication in the Spirit,
and watching thereunto with all perseverance and supplication for all saints."
~ Ephesians 6:12, 13, and 18 ~

"For the invisible things of him from the creation of the world are clearly seen,
being understood by the things that are made, even his eternal power and Godhead;
so that they are without excuse; Because that, when they knew God,
they glorified him not as God, neither were thankful;
but became vain in their imaginations, and their foolish heart was darkened.
Professing themselves to be wise, they became fools."
~ Romans 1:20-22 ~

May God be glorified and eternally exalted.
He alone is worthy.

**Images in this post courtesy of Answers in Genesis
Posted by Camille at 27.1.14 Labels: Bible Verses, Discipling Our Children, Education, Homeschool, Spiritual Encouragement, Things to Consider

Thanks Camile,
I clicked on the link...it crashed my browser with an unresponsive script. I put the address it my address bar by hand...and it froze my browser with the same unresponsive script. ....wouldn't let me click out of it. I'm just wondering if there is a problem with the page. Obviously you had no problems. My browser is Firefox and it has never crashed before. I'll Google it and see if the link is correct.

But thanks... I had no idea about this debate.

I heard about this but didn't have enough information! Thank you!

Just read Patrinas comment but I had no problem opening the link.

I registered for the free live stream, and also pre-ordered the DVD in case something happens to the internet! Thank you for sharing those very important passages of scripture. I have been praying for Christ to speak through the instrument of Ken Ham. So many people are talking about the "debate" as if there will be winners and losers. I hope Ken can preach the gospel!

Dear Patrina ~ Oh, sorry you had all those issues with it! Hmmm...I use Chrome and have had no problems opening the link. My son used Firefox just after you left that comment to test it and it worked for him. I do hope you are able to tune in. :)

Dear Heather ~ Oh, so glad you didn't have issues opening the link. Hmmm...I wonder what was up with that. Thanks for your input. :)

Dear Lois ~ Isn't it a wonderful thing to know that the Lord's Word will not return void? It will accomplish what it is sent for. The Lord is eternally good and righteous in all His ways. Yes, we must pray. Thank you for stopping by. :)