And Down it Came

In our area it is necessary to get a permit
prior to cutting down a tree ~ it's the law.
And, this city does not give out permits easily.
However, if the tree is ten feet from your home
or closer, it is automatically granted.

This was our neighbour's tree.  Not ours.
But, it was right along our property line.
Essentially, we shared the tree.
And, it was less than ten feet from his house.

It was destroying our roof and his.  We have no idea what might
have been happening to our foundations ~ scary thought.
Between the two properties there are at least 40 trees.
This one will not be missed.

See the tree in the centre of the photo below?
It looks as though it is coming up through the fence, doesn't it?
It practically was.

Our home is on the left, our neighbour's on the right ~
in case you were wondering.  Were you wondering?  ;-) 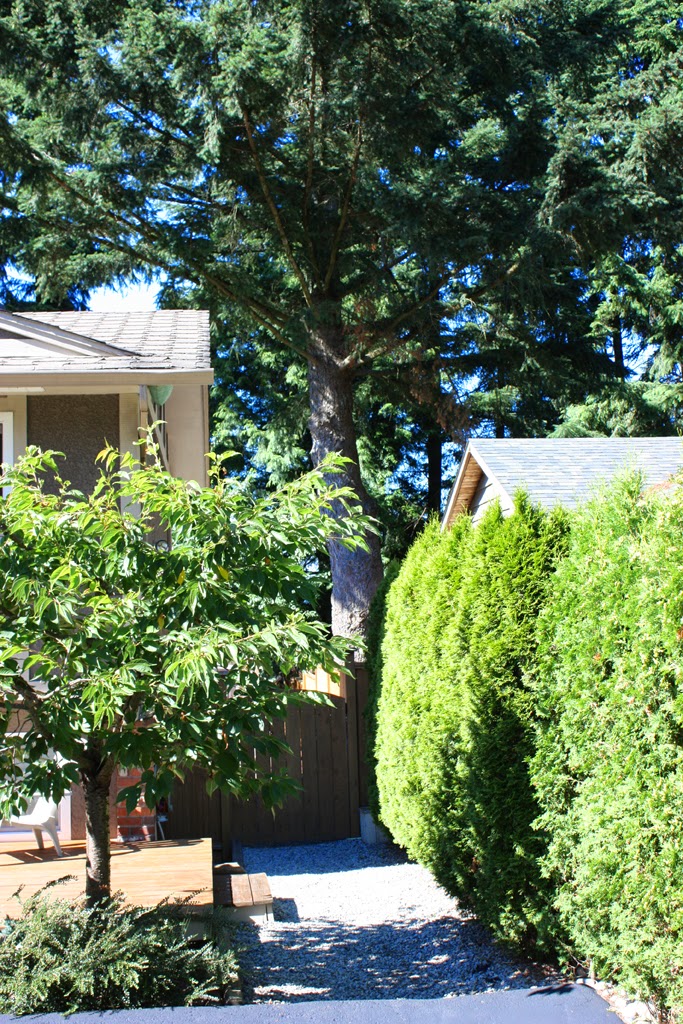 Here is the same shot just looking up a bit. 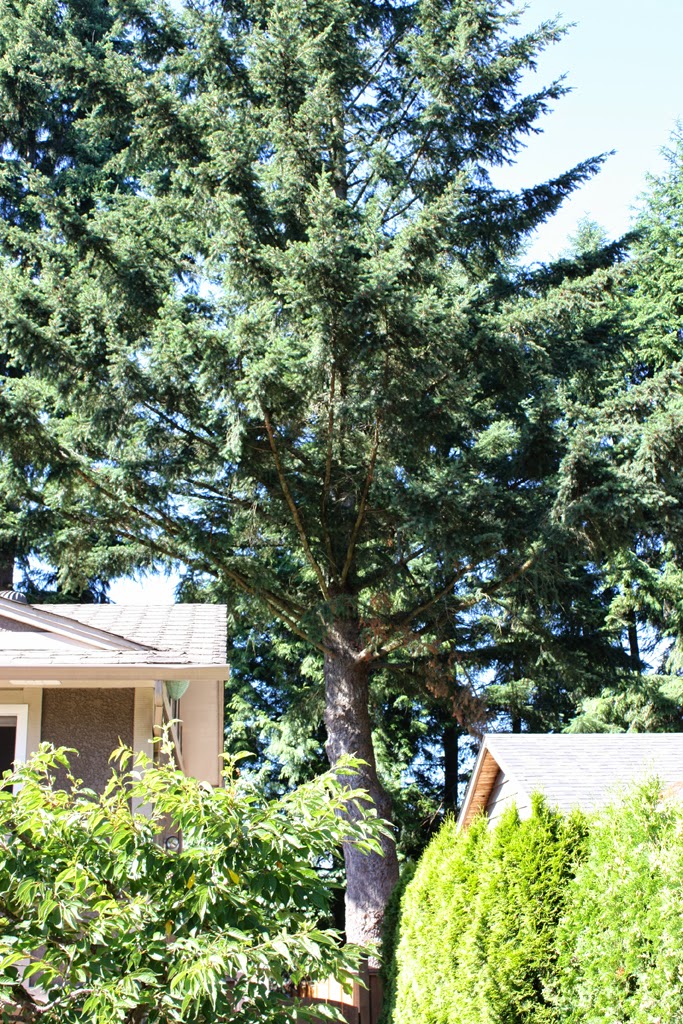 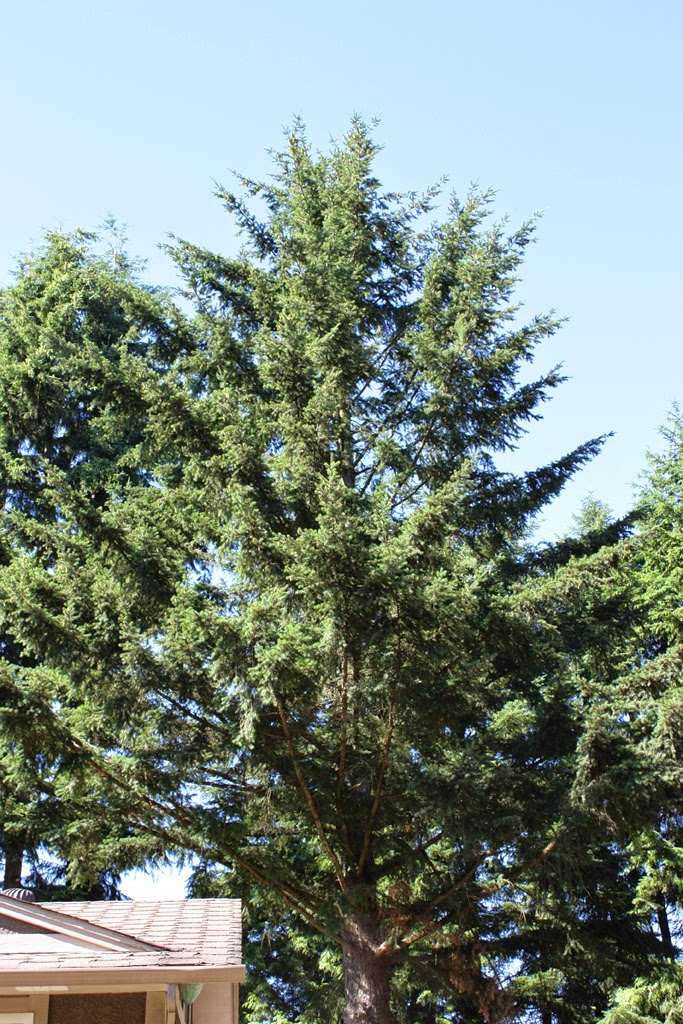 On a side note ~ Years ago, we had a tree in our front yard that
stood about ten feet from our house, and rose to the height of 110 feet.
It was an *old-growth* tree and was one of only three of its size in this entire area.
All the local arborists were aware of it.  When we were calling
around about it they said, "Oh, I know that tree!"  And they did.

The top of our tree-from-long-ago could be seen
from the neighbouring park and even from the freeway.  It was HUGE.
We had it taken down when Fraser was a baby ~ it had been deemed dangerous.
Unfortunately, we don't have photo documentation of that event.  Sad, but true. 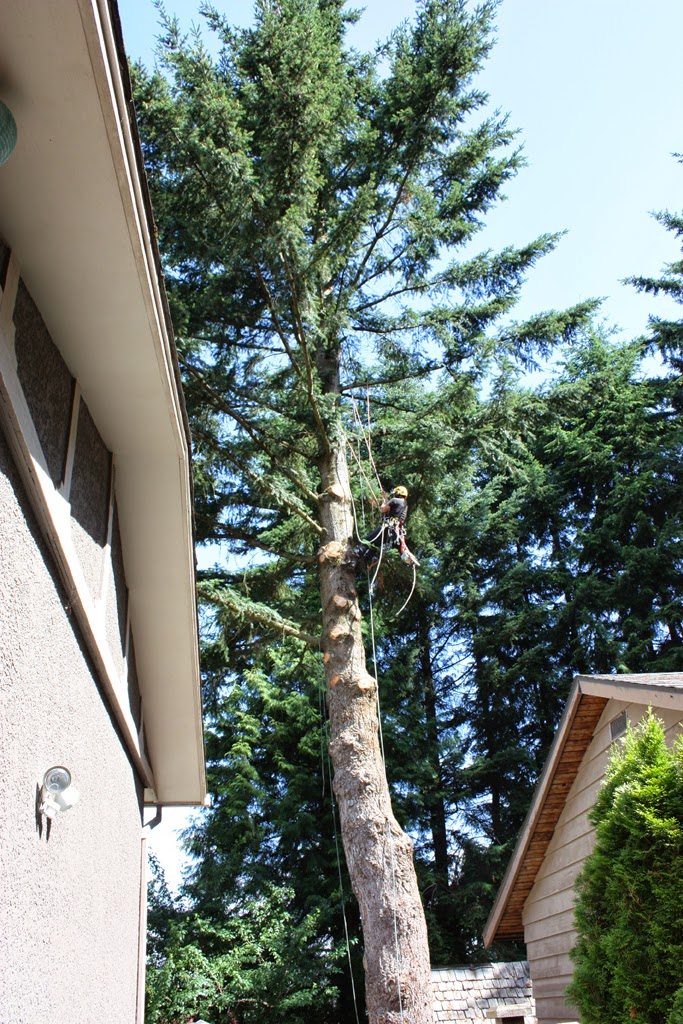 A team of three men came early in the morning last Wednesday.
One of the men climbed the tree and one by one removed its branches. 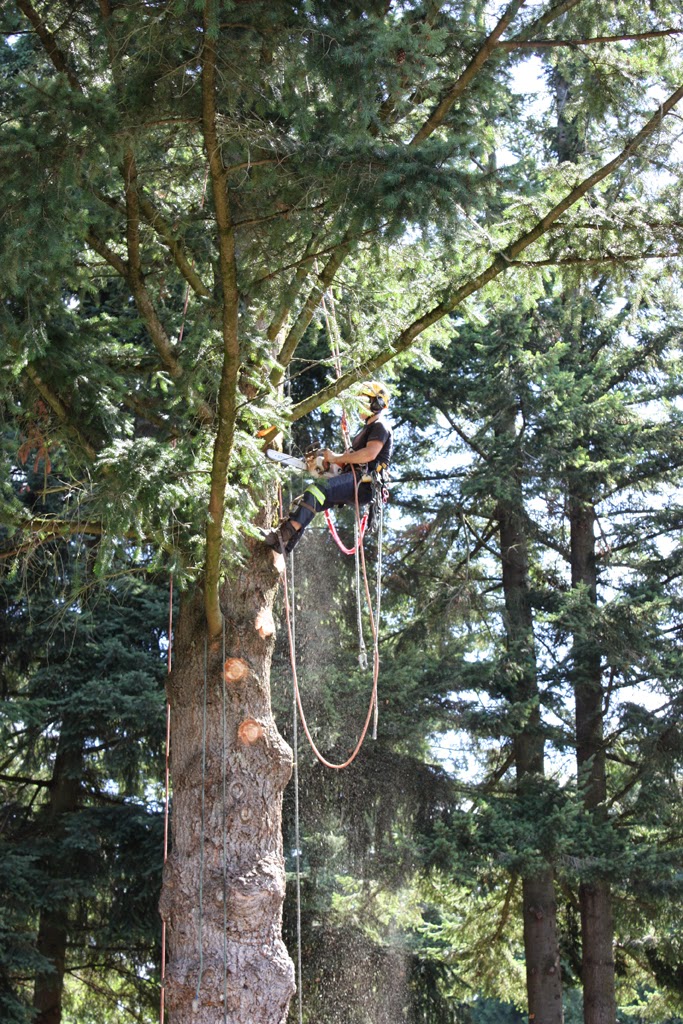 The two other men worked on the ground pulling those branches down
using the pulley system they had rigged up.  They fed the chipper with them. 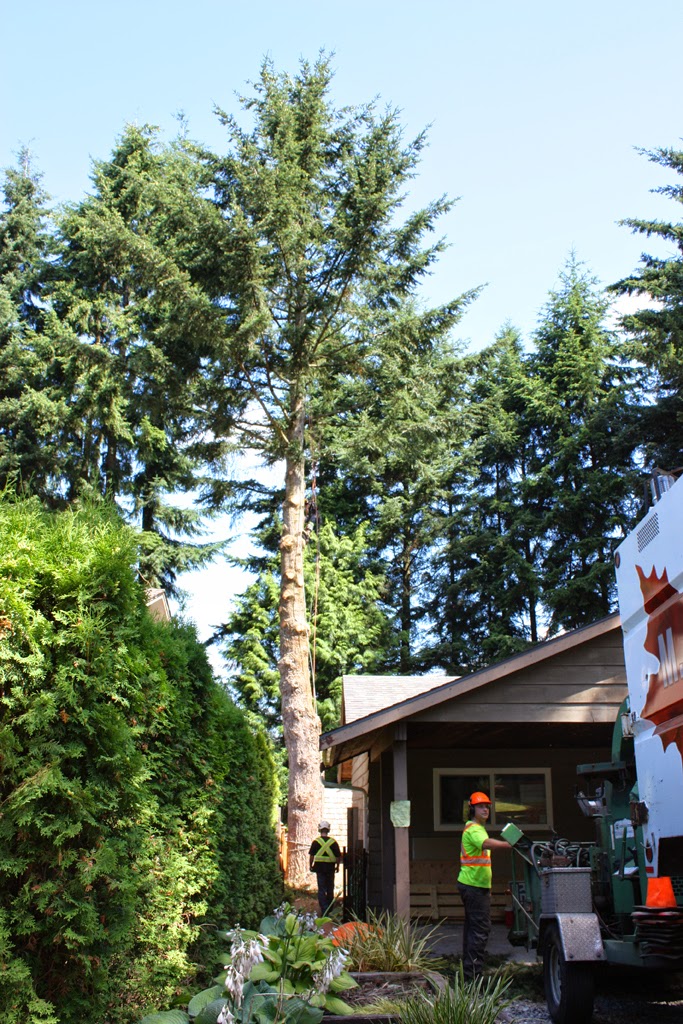 That's how things went all morning.
Until finally, the tree climber dude was near the top. 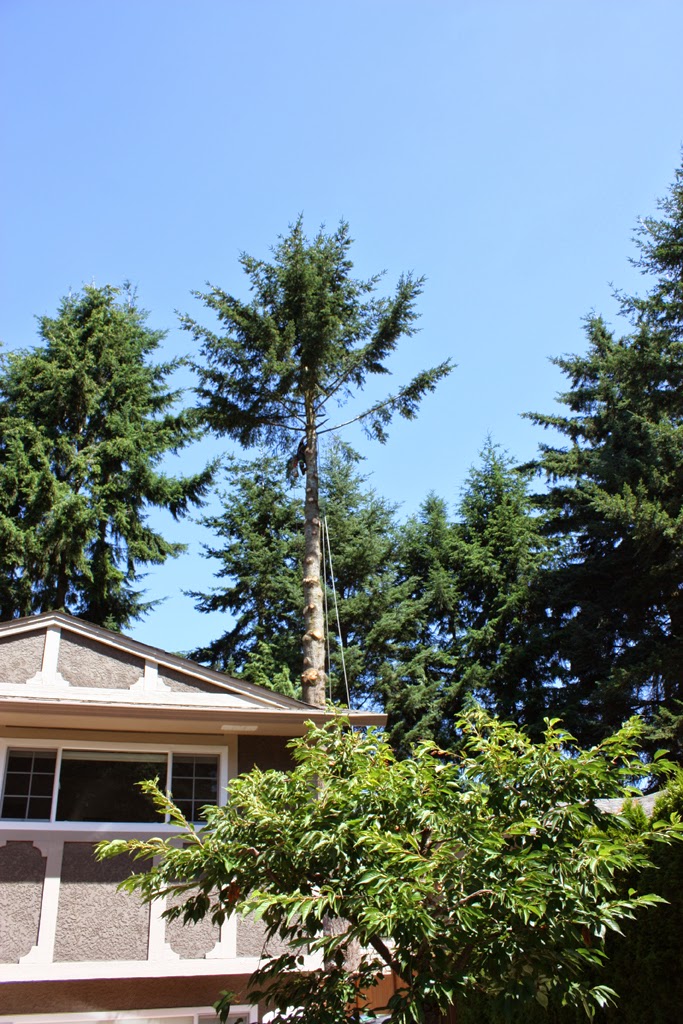 See him up there?  See Emma on her perch? 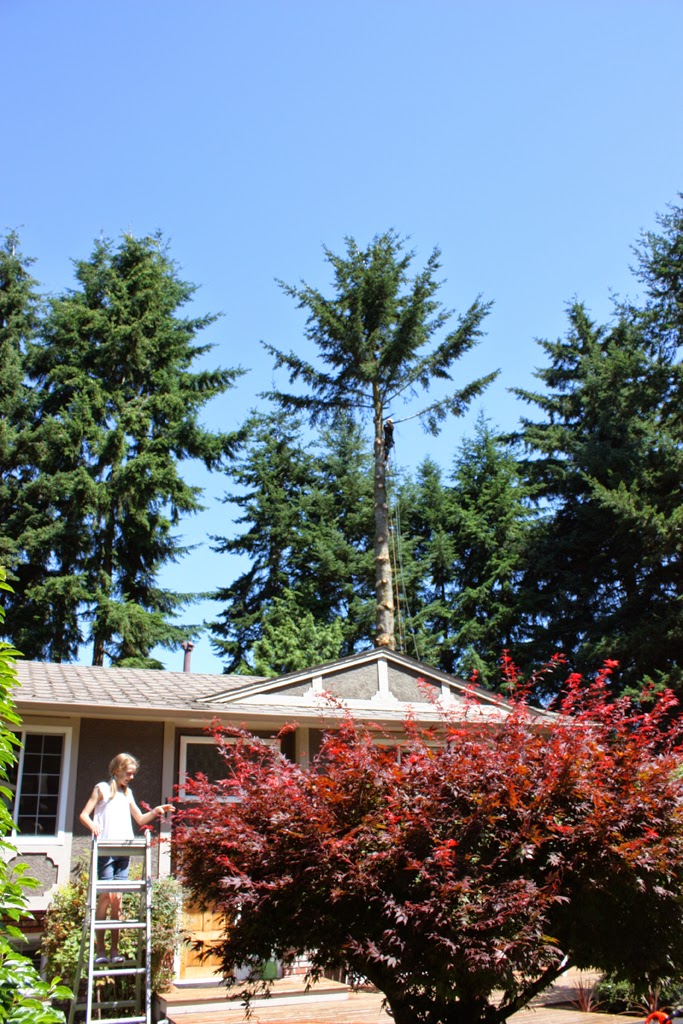 The pulley system was rigged up to the base of the top part of the tree.
The chainsaw worked its way through the trunk just below that base. 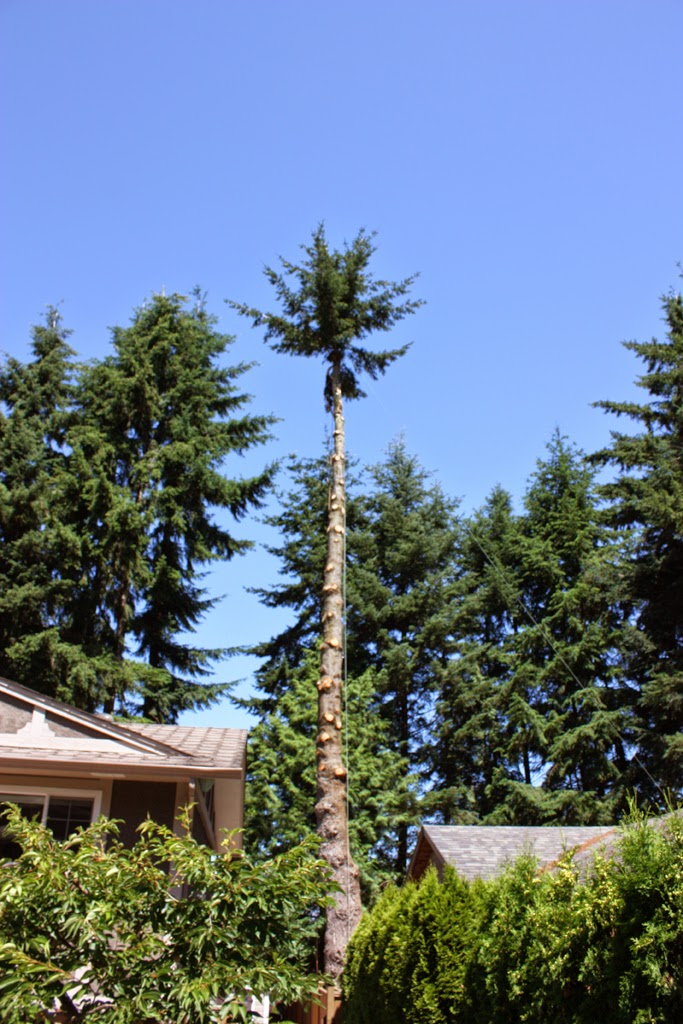 Timber!  What a crazy guy...look at him way up there!!
And down it came. 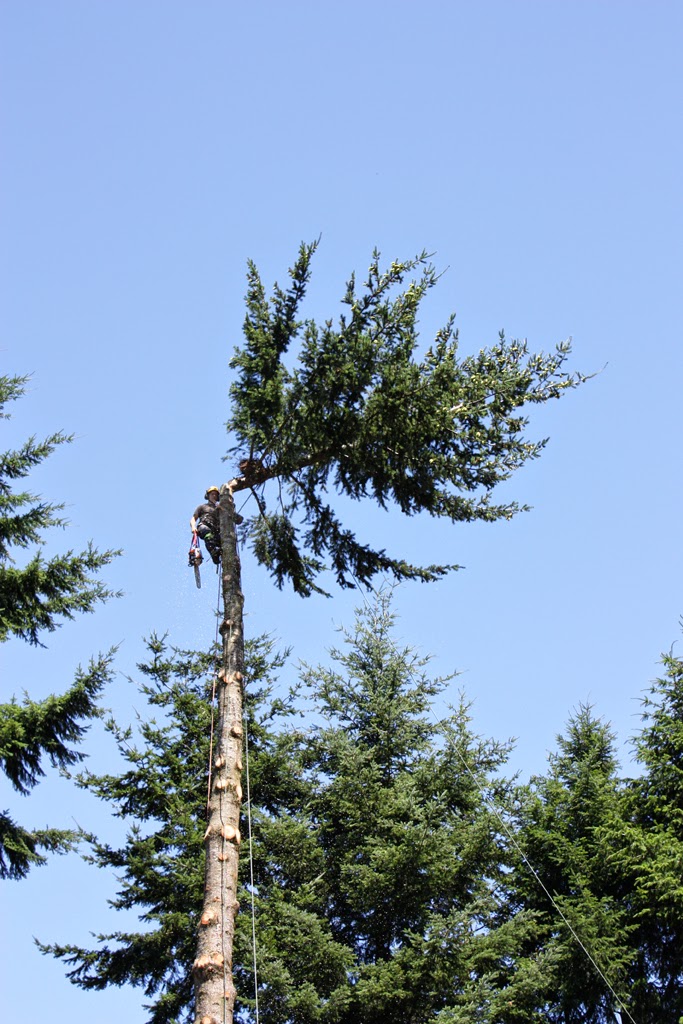 All seemed to go as planned until that tree top smashed
into the remaining trunk just below the calm looking worker.
He had to hold on tight as the trunk rebounded from the blow.
There were a few tense moments at that point. 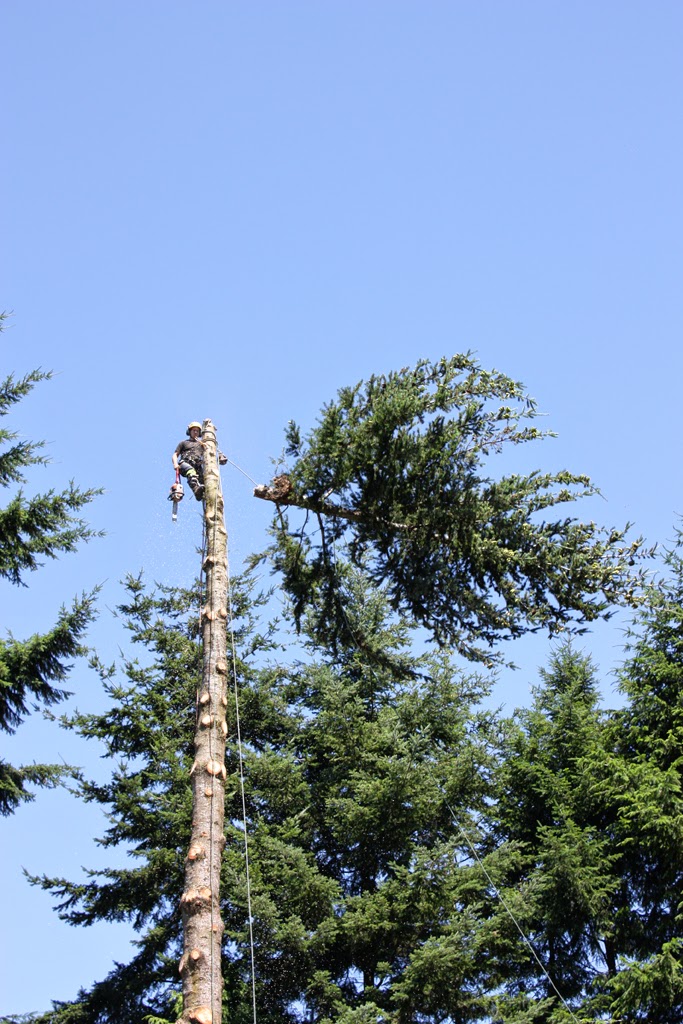 He assured us that he was fine and we breathed a
collective sigh of relief.  I am sure the two other workers were
instructed on what to do (and not do) the next time once the job was done.

See the tree top at the bottom of the tree trunk in the photo below?
It was coming down to its resting place on top of the fence.
Somehow I got the feeling that wasn't their original plan. 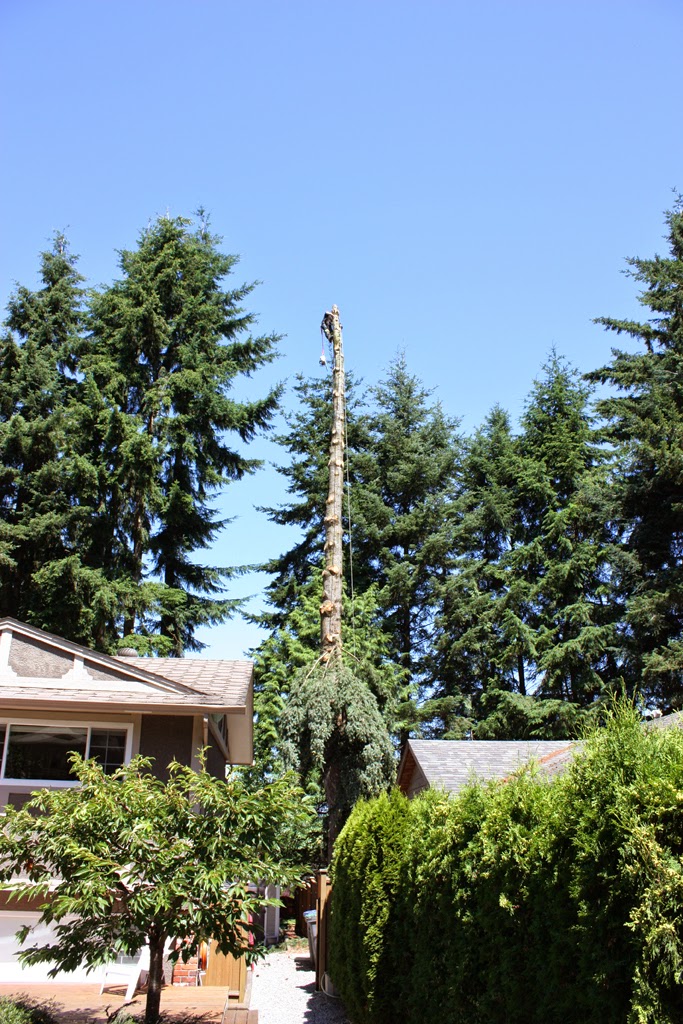 There were two trailers full of logs as well as more stored
for a future load.  Some of the wood was ear-marked for us.
Yippee!!  I *love* a good fire in the winter.  :) 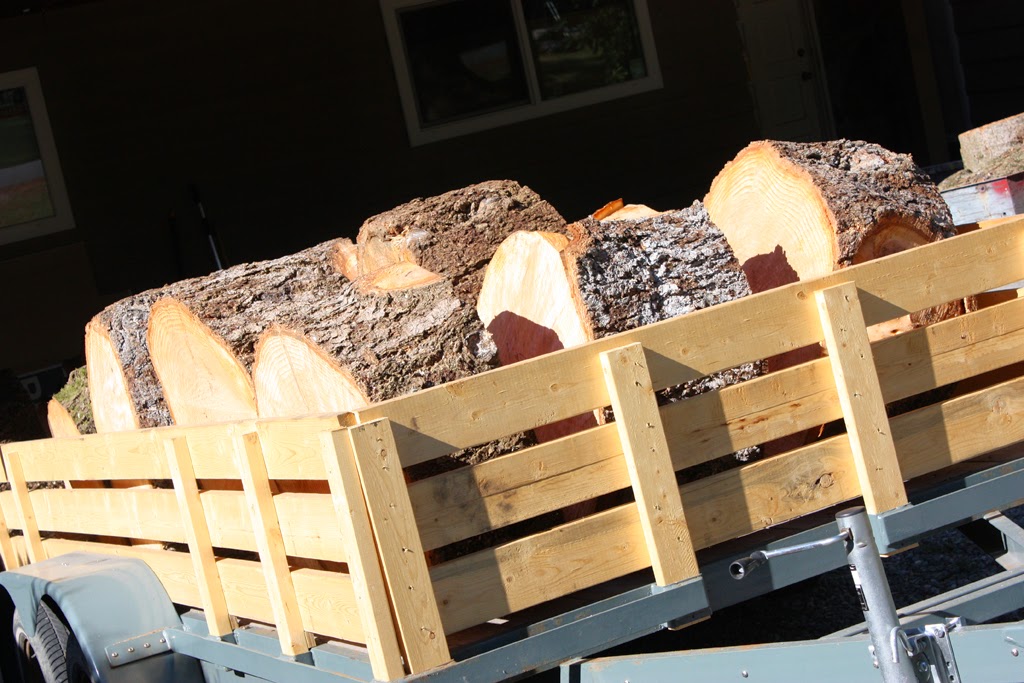 Fraser and Calvin were a huge help. 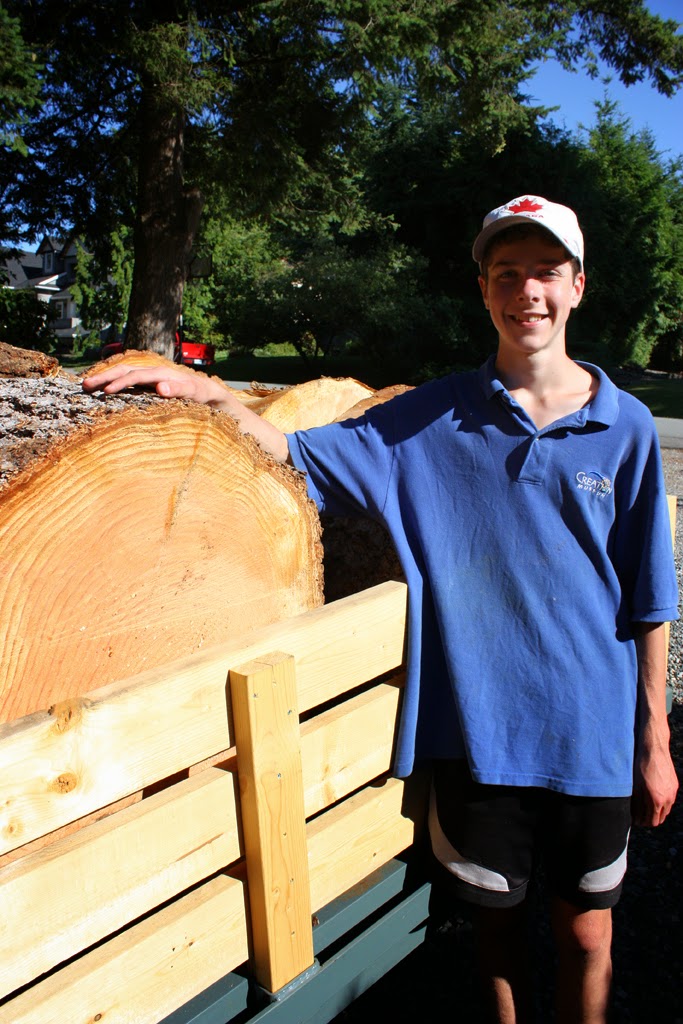 Those logs were heavy! 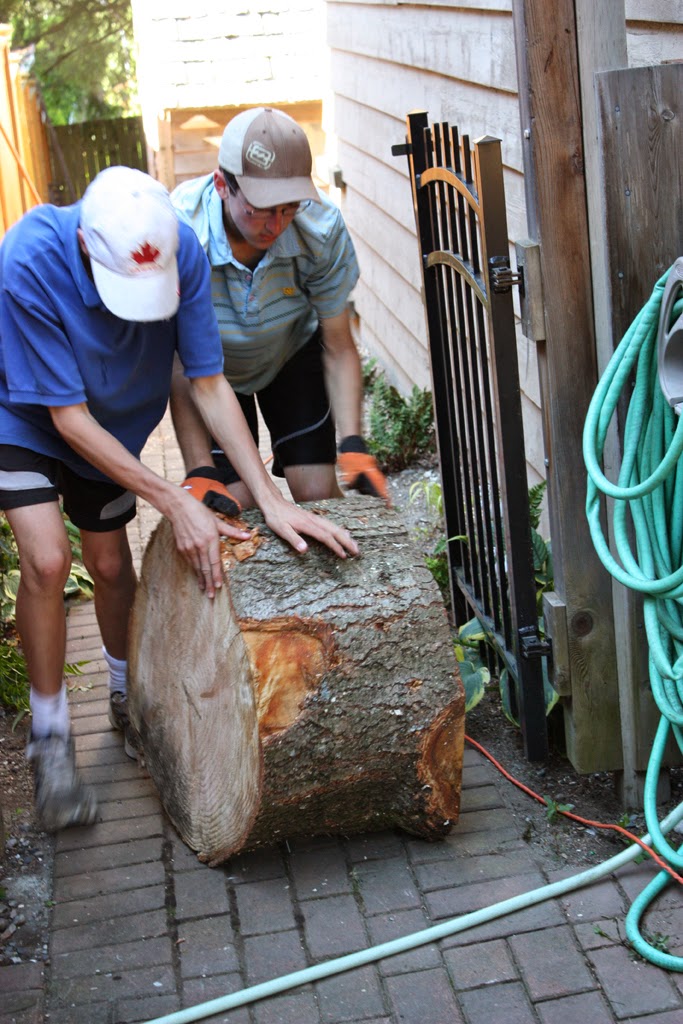 Just look at the size of one of the slices. 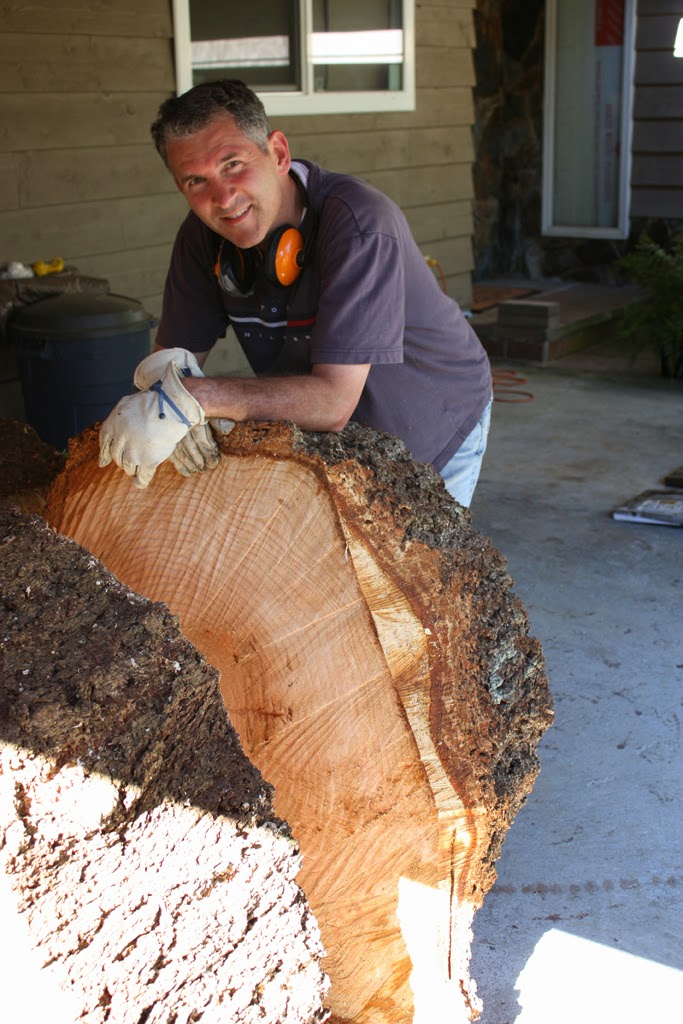 All that remains of the tree. 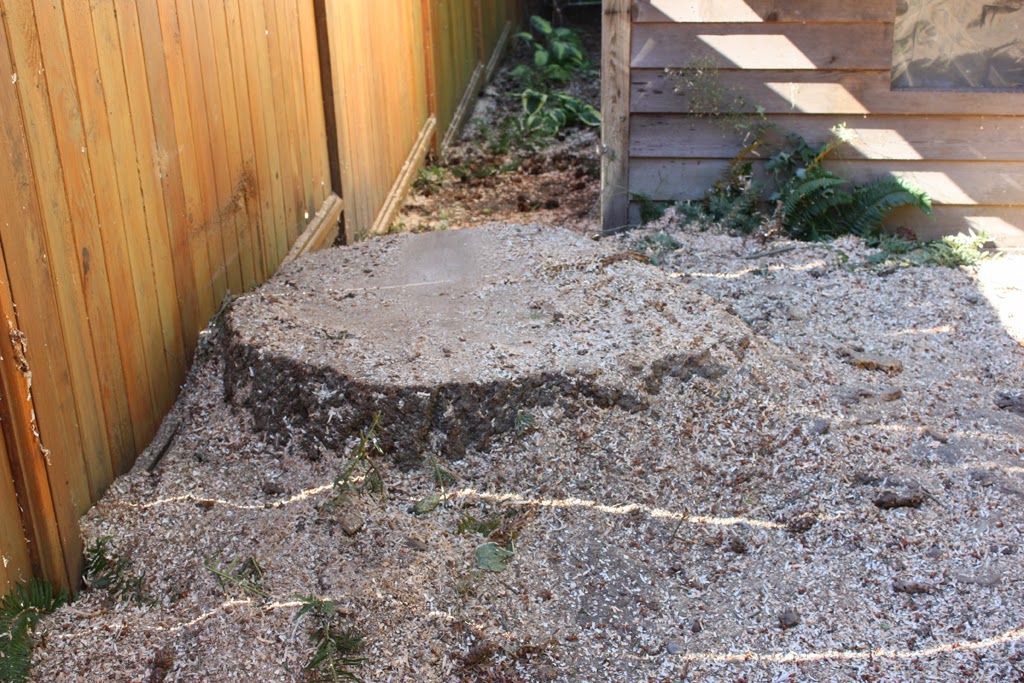 The view from our front driveway.  It's gone. 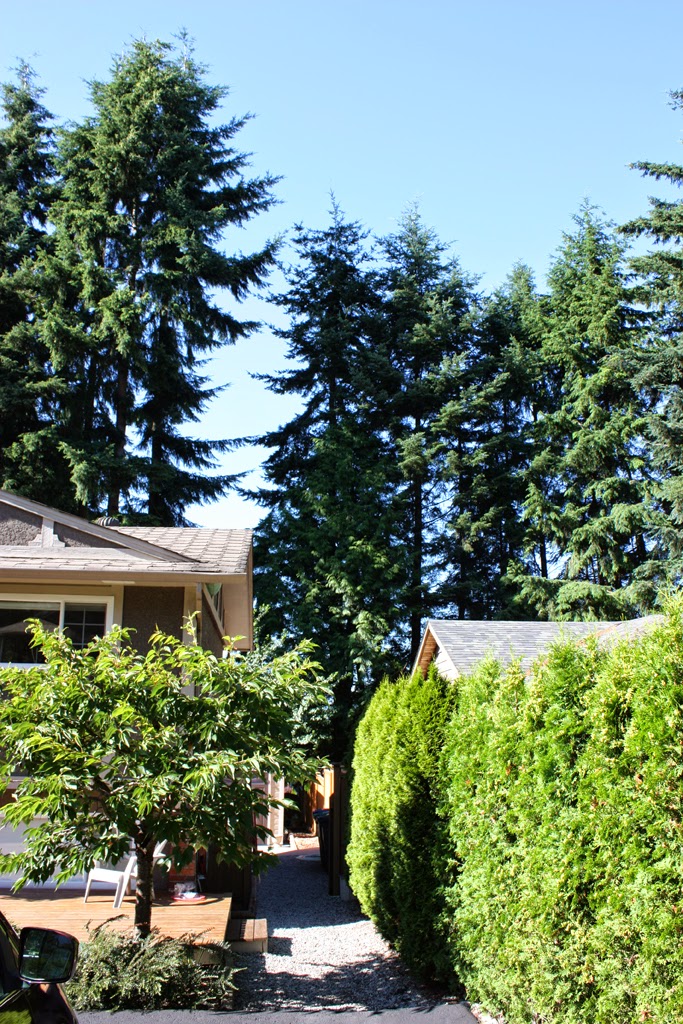 We are thankful that no one was seriously injured
and our properties were kept intact throughout the process.
It truly was an incredible thing to witness.

That makes great firewood!!! Do you heat with wood?

I love trees...but I must admit, the area there does look so much better with it gone!! :)

That was SOME tree! Glad that everyone remained safe!

A big job! We have a tree that needs to come down also. A lady at one of the antique/booth stores here actually sold some cuttings from a tree trunk, bark and all, as end tables. Maybe for an outdoor porch area or something - not sure. Yours could probably be used as a whole table! Have a wonderful day!

I'm usually sad when trees have to come down....but when it can be a danger or hazardous it's better to air on the side of caution. We had to chop a tree too this spring as it was starting to lean and one really bad storm and on the neighbours fence it would landed. And we would have been responsible to replace the fence. Plus now, there is way more sun on the pool. So sometimes these things just have to happen. But wow, that was a huge tree in the yard and not good had it fallen on someone's house.

Good Morning Camille.
You have been busy in your yard! What a learning process for all having the tree cut down. I can tell your kids were truly engaged. Hope you are well and enjoying the summer :) Hugs! Pippa

Dear Katy ~ We only have fires for fun...not to heat the house. :) This particular tree was destroying things...it's good to have it down. Our back yard gets more sunshine now, too. :)

Dear Patty ~ Yes, I suppose it could have been made into a table or two or three...but, it is all destined for fire wood. :)

Dear Connie ~ I agree...it's best to take them down when they become a hazard (ideally before they become one). :)

Dear Pippa ~ I trust you are well, too! How quickly the time flies by!! Happy summer to you and your family. :)

Bevy @ Treasured Up and Pondered said...

Wow! That was one Tree-mendous task. Aren't you glad those guys know what they're doing?

And, wow... that really was coming up through the fence (basically!)... you said something about being worried what it may have done to your foundations, if it did so much damage to your roofs? How do you know or do you dare to find out?

Glad everyone was safe. I love trees! So sad to see them go...

Oh my goodness, what a job! Michael has taken down several large trees himself and it is always a very scary process. I literally can't watch! Glad no one was hurt and no property was damaged. You have a good blogging break, my friend. Loved the pics of ALL of the kids at Disney World. I'm sending up a prayer for you all right now. May God continue to hold you and cover you in the shadow of His wing. Love you!

Dear Bevy ~ I am not sure how we would find out about our foundations...hmmmm....lumpy floors perhaps? ;-)

Dear Jackie ~ I am so glad Howie didn't attempt to take it down by himself...dear me!! It was quite something to watch. :)