This is becoming a series ~ bear with me, please?
Calvin took nearly 3000 images and Emma
was a close second with around 1000.
So, it has become necessary to break things up a little.

Our friend's Mom kindly opened her home to us.
She graciously allowed us to stay with her for the first three nights
of our vacation so that we might tour London ~ what a blessing! 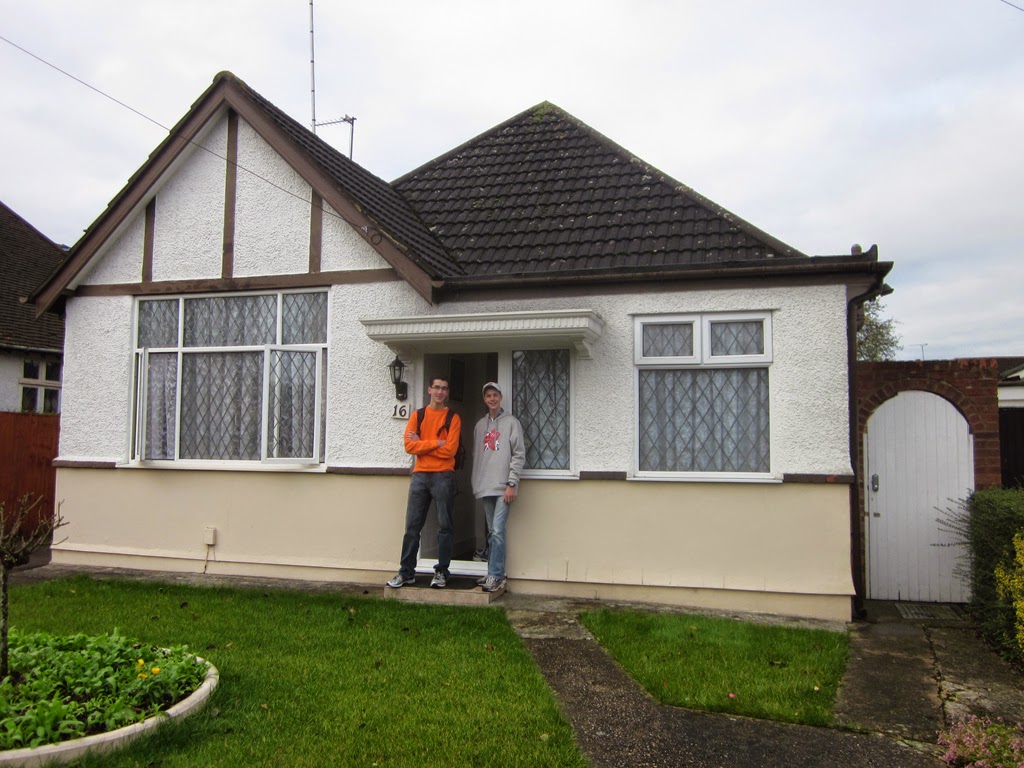 This is the view looking toward the street from the front door. 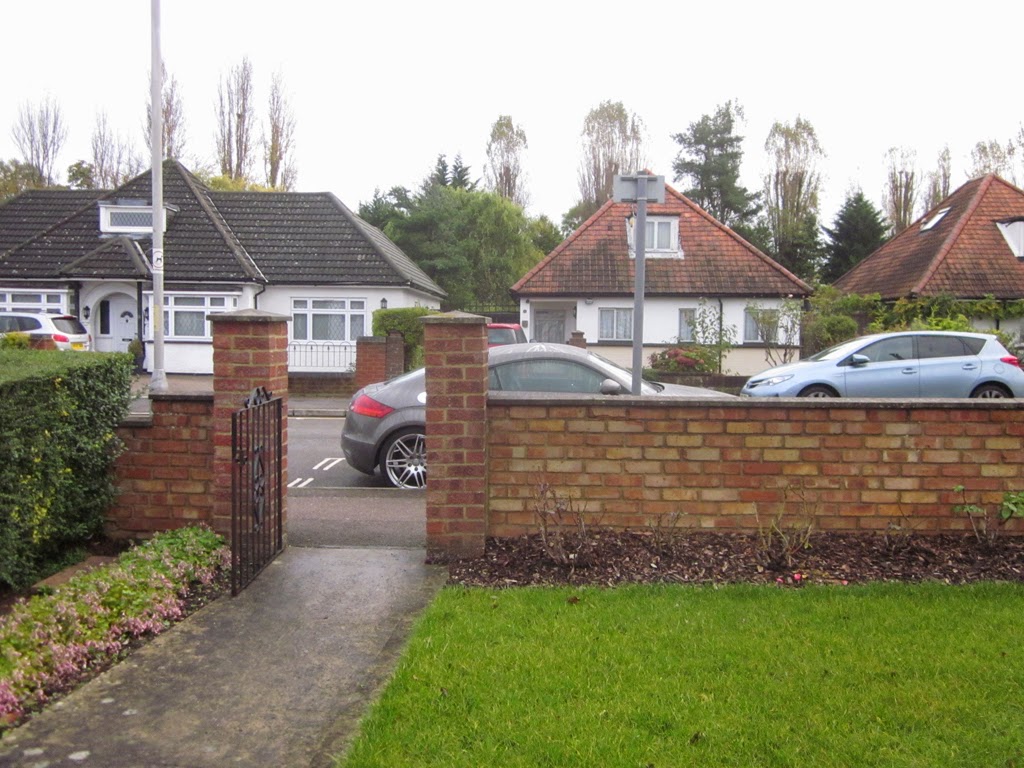 Fraser is walking up the main street of the little town
she lives in just ahead of us in the shot below. 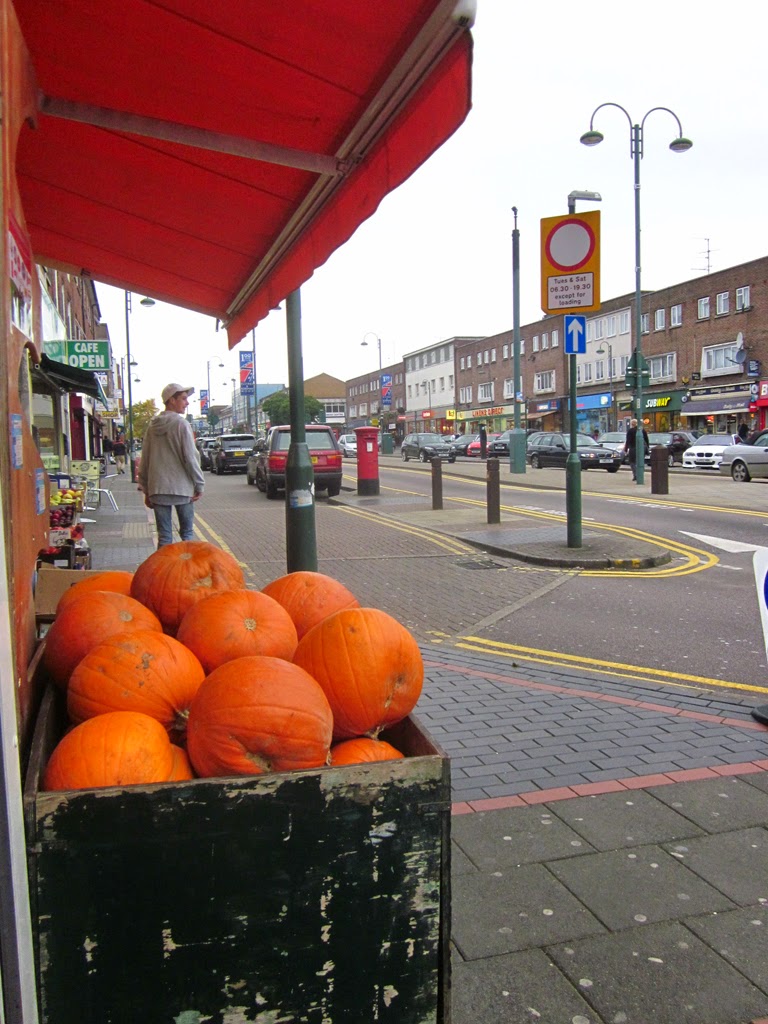 Have I mentioned that there was an eight hour time change to deal
with those first few days of our trip?  Well, there was.
This meant that getting up at the crack of dawn
was a little bit challenging, since back home it was oh ~ 11pm!
The one day when we were down in the city *early*
I took note of the time our bodies were feeling ~ 2am.

It was so much better not to think about it.

So, I tried not to, and forged ahead.  And, forge ahead we did.
Our first stop on day two in the city was The Tower of London.
It was well worth the visit and took more time
to tour than we thought it would. 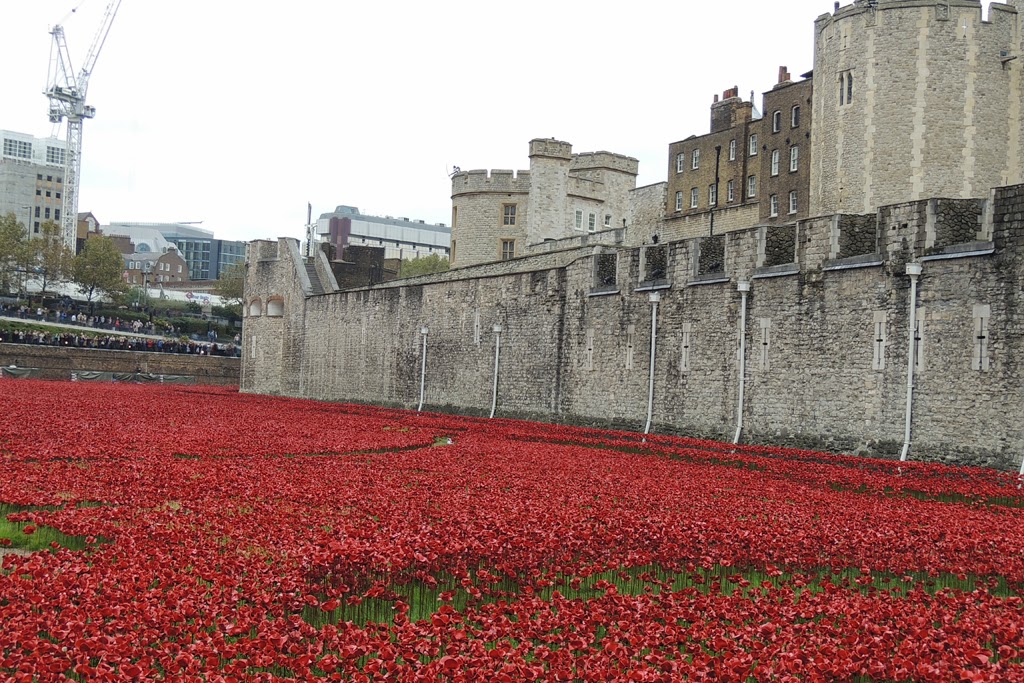 The moat filled with poppies was incredibly impressive.
Apparently, there were nearly 890,000 of them placed.
We had no idea that this was what we would see ~
we have since discovered that it was a rare treat! 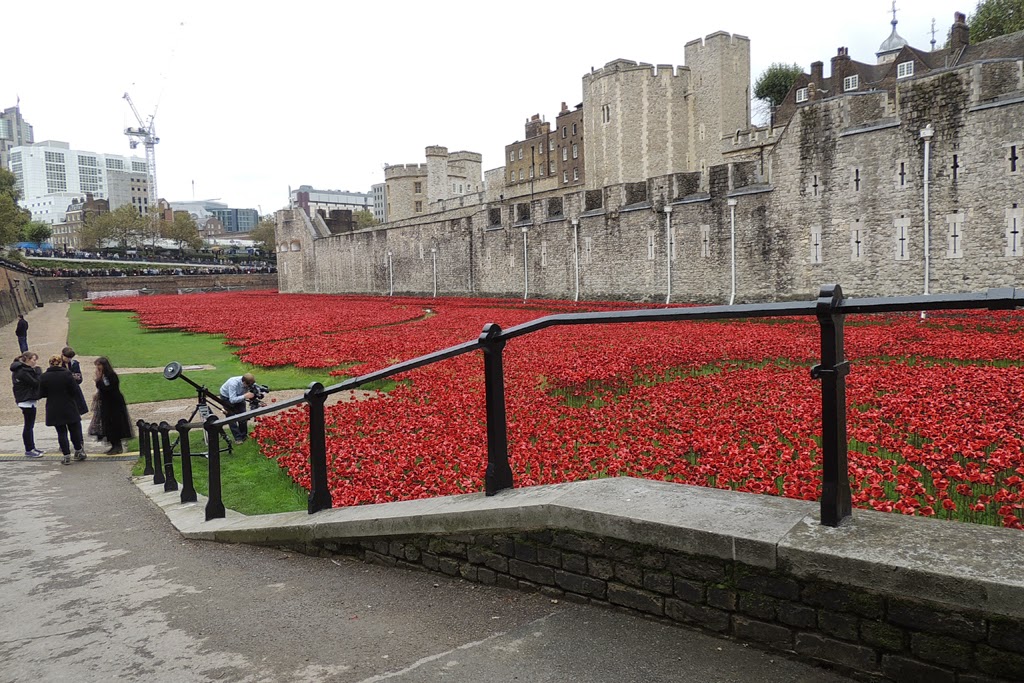 Each poppy that was placed was to represent a Commonwealth soldier who
died in the First World War ~ My great-great uncle was one of them. 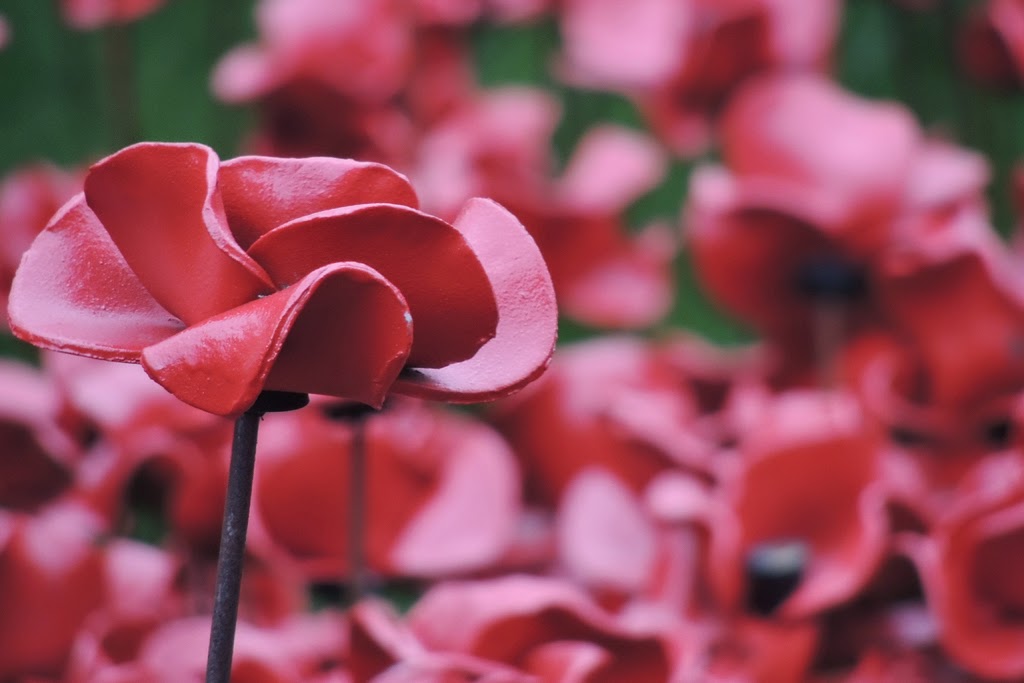 The view of Tower Bridge as seen from inside
the courtyard area of the Tower ~ below. 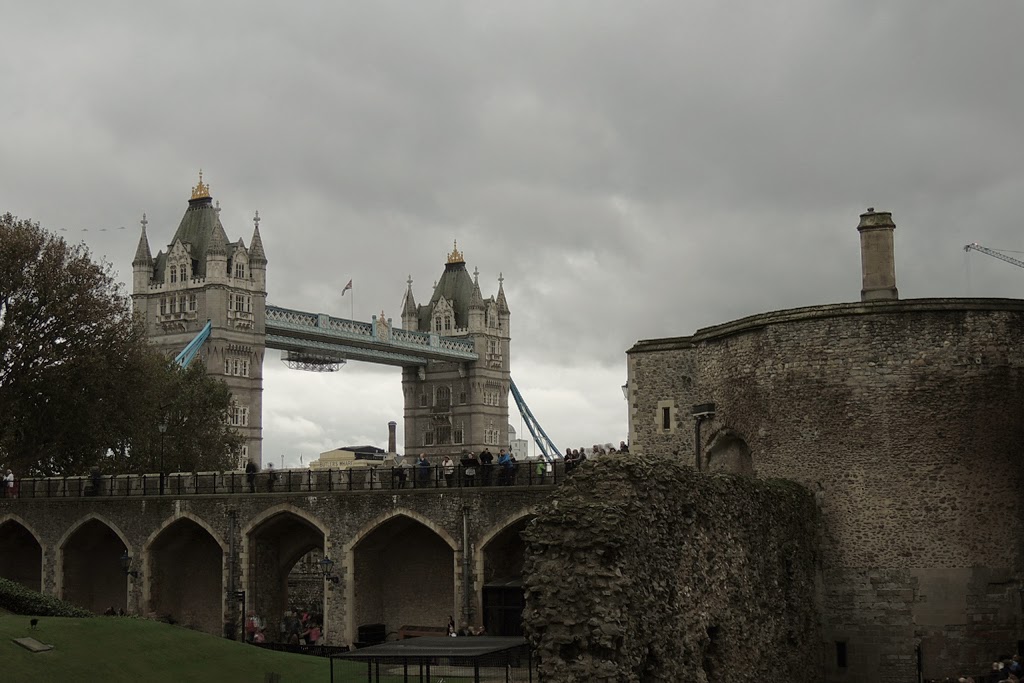 Overlooking the crumbling walls and courtyard areas within
the main walls of the Tower of London. 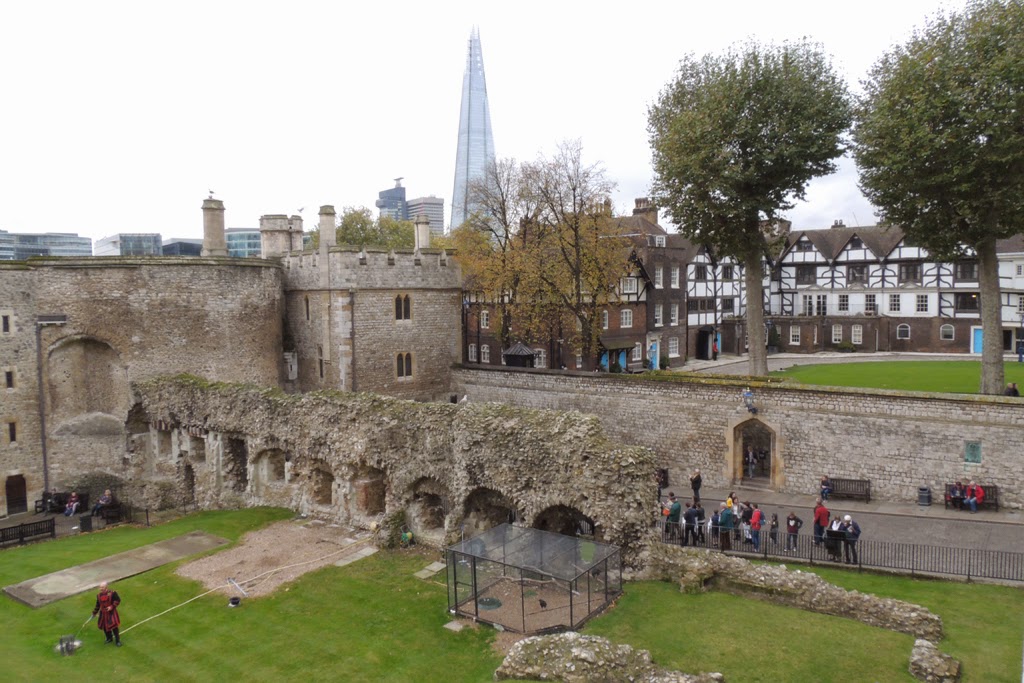 This guard really was guarding ~ yes, he was! 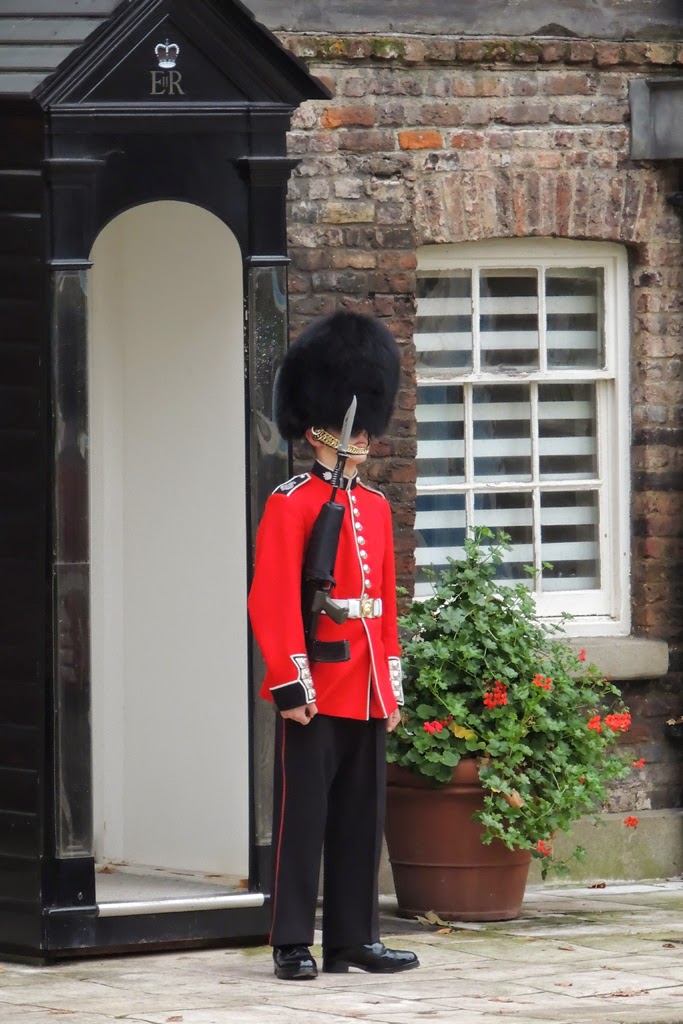 The main *Tower* was directly behind and to the left of us in the shot below.
The building where the crown jewels are kept is in the far back centre.
On a side note ~ we viewed those jewels.  It was difficult to comprehend
what we were actually looking at ~ one of the diamonds is over 500 carats in size! 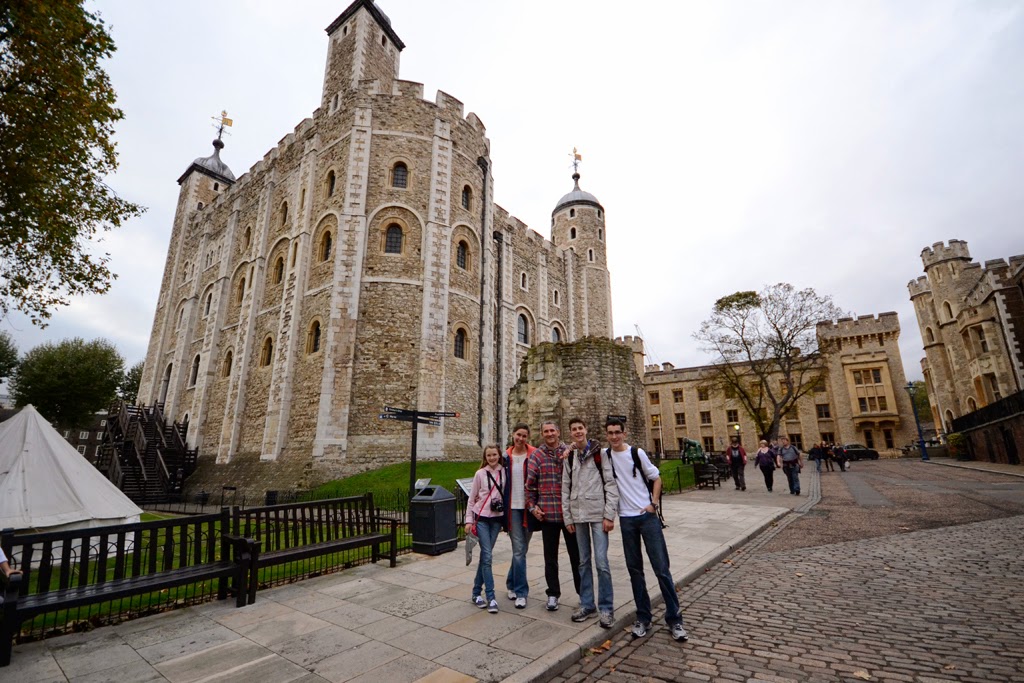 We stayed through to closing time at which point we were
shooed out by Beefeaters ~ not even joking.
However, one of them kindly agreed to have
his photo taken with the children ~ see? 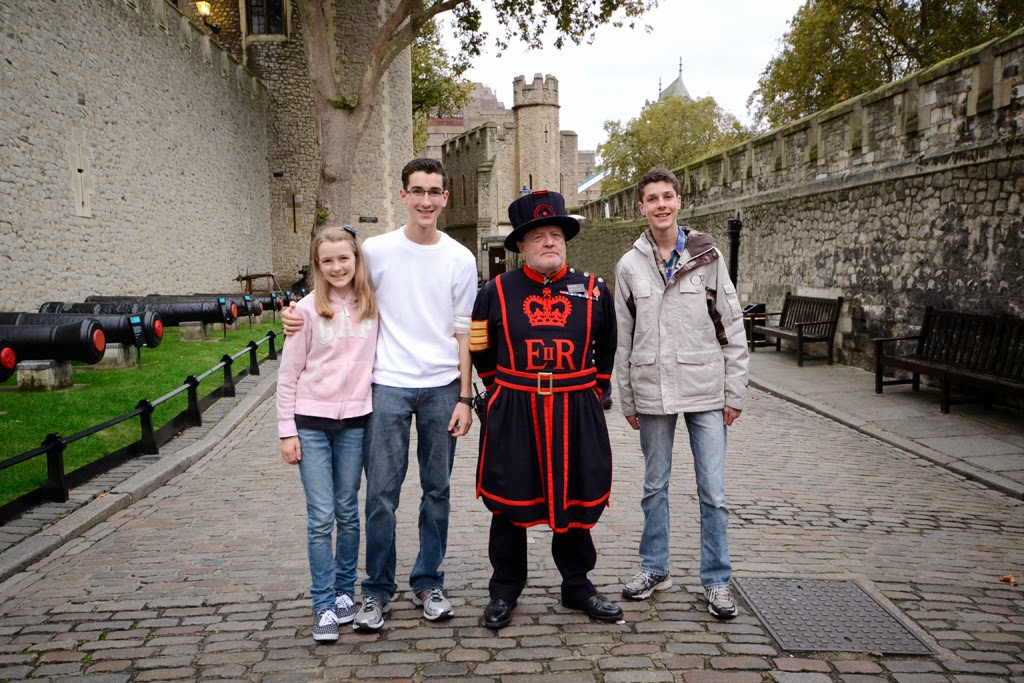 As the evening descended upon us, we saw this ~ isn't it beautiful all lit up? 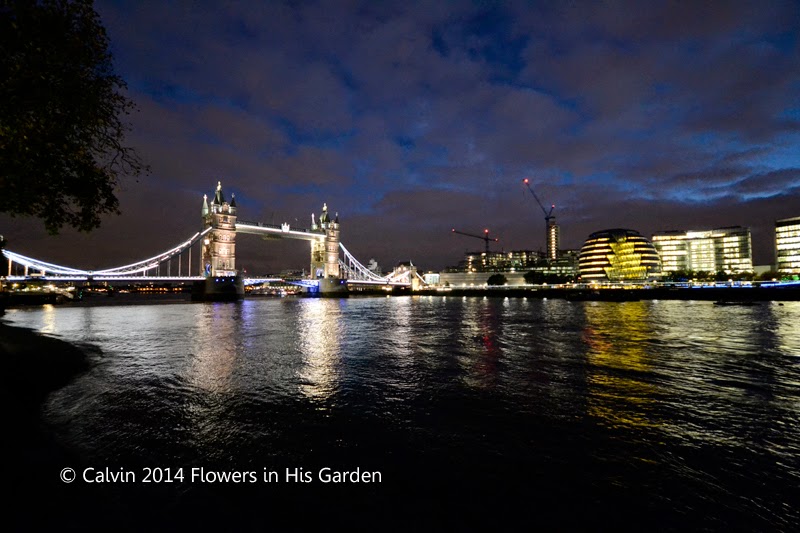 We met up with a friend for dinner that evening in the city.
We arrived back at our lodgings late and rose early-ish the next morning
so we could venture out for our last full day of sightseeing
before heading North to stay with our Auntie in Wales.

Our final day in the city took us to Westminster Abbey and the British Museum.
Calvin had his camera in tow once again, and was able to capture many iconic
London sights all in one shot.  This was taken just outside Westminster Abbey. 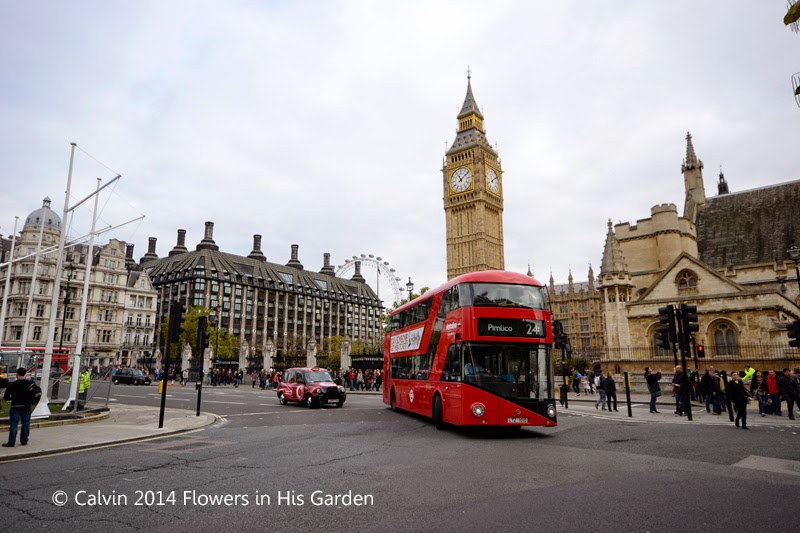 To get from one location to the other, we rode in a double decker bus ~
the top front row seats became available partway through our journey.  Score!
Here's the photo to prove it... 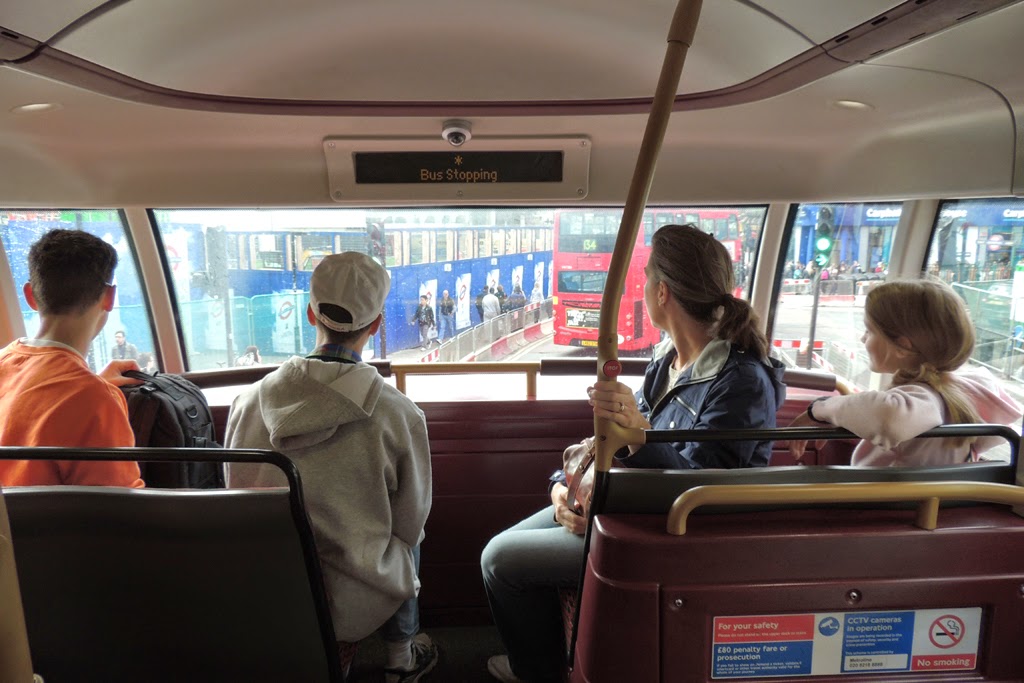 Old buildings on the left and new on the right ~
it is how it is in London.  I found it very interesting. 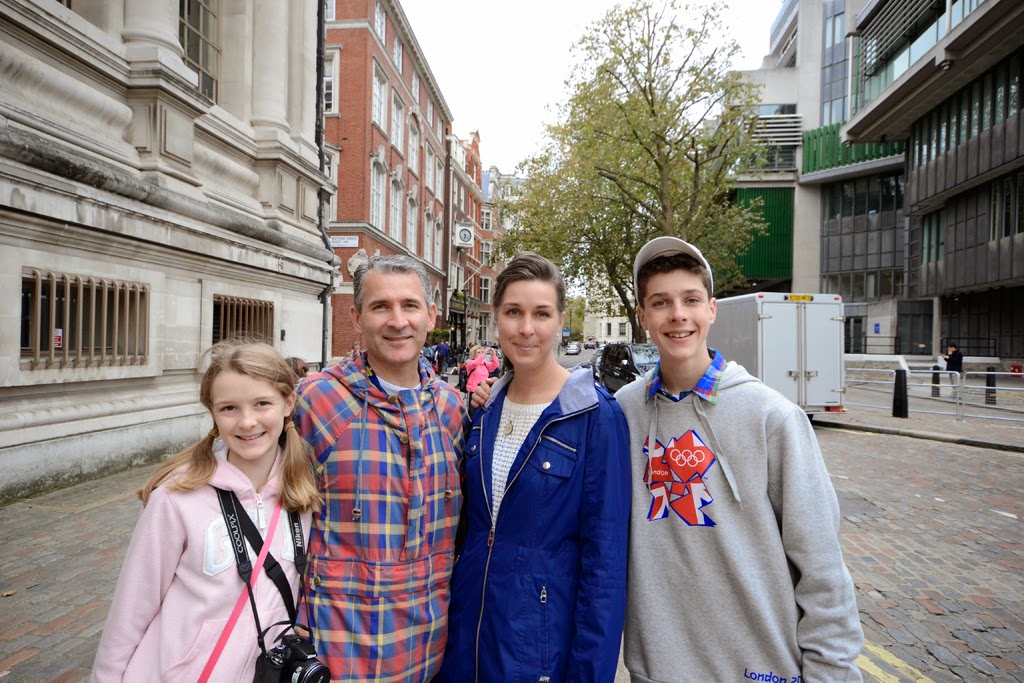 After the bus ride ~ street view as we made our way to the museum. 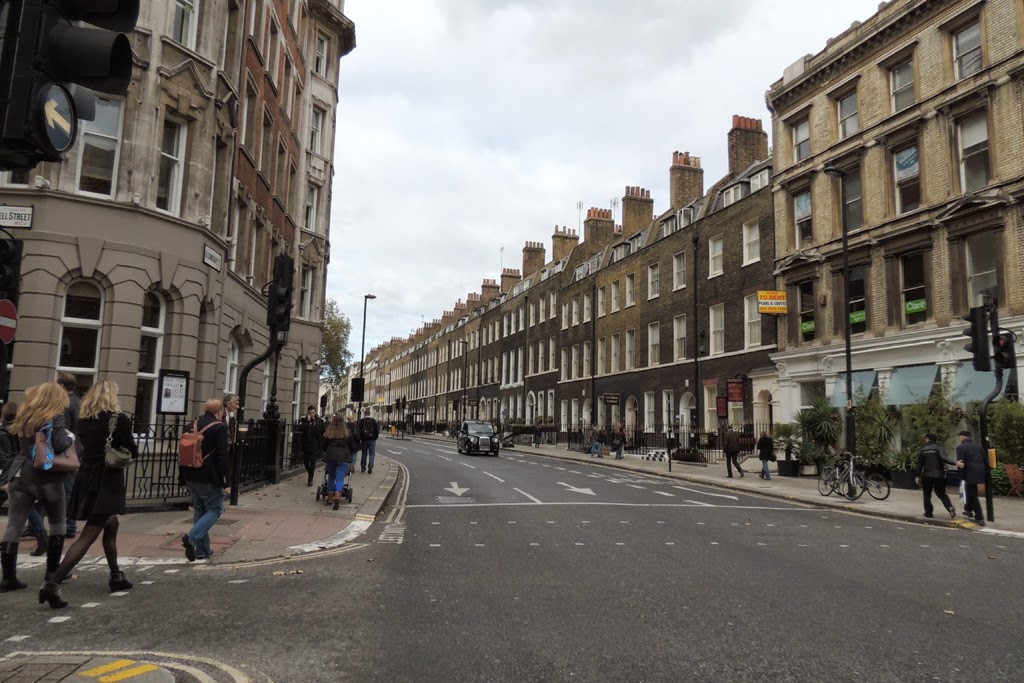 See us heading in?
Calvin took this shot, that's why he is missing. 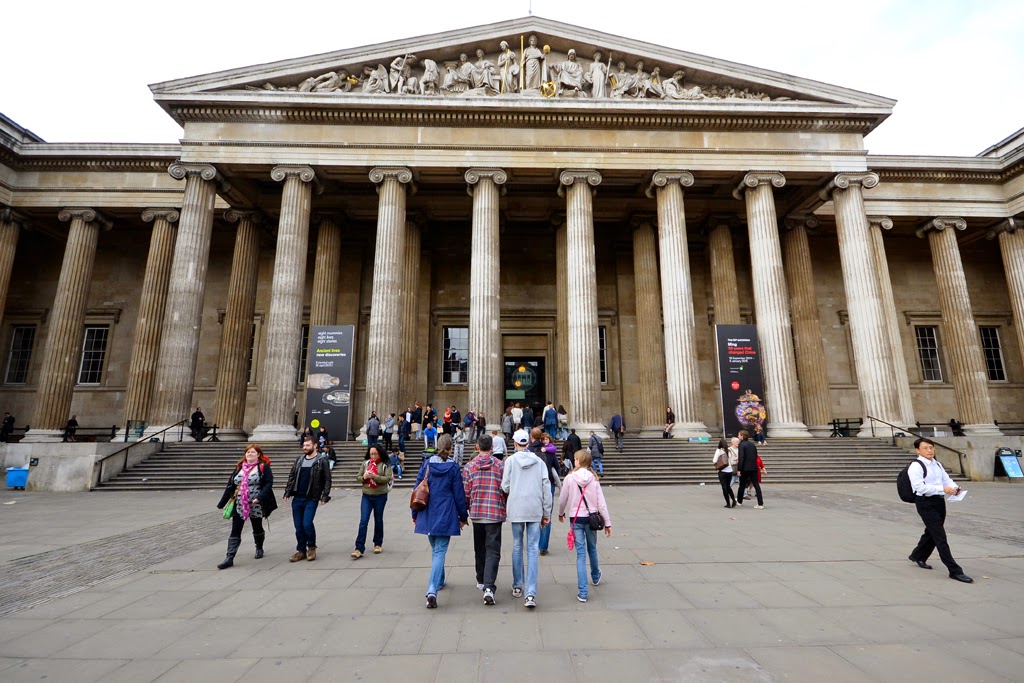 Fraser loves languages and cultures ~
it was a highlight for him to see (and be photographed with)
the actual, real, in-the-flesh (or rock, as the case may be) Rosetta Stone! 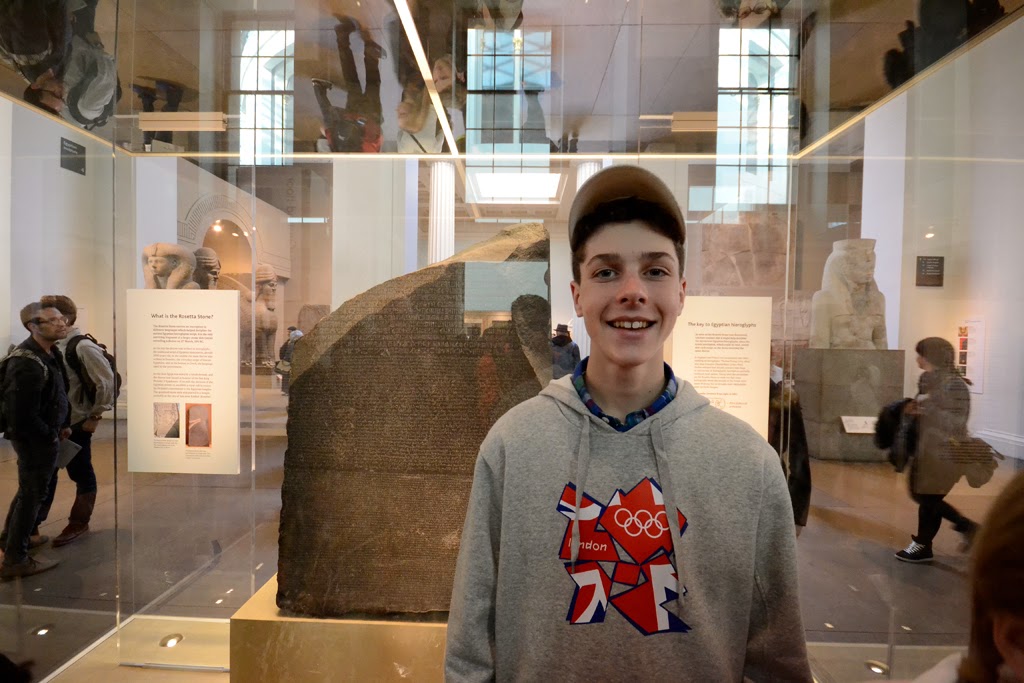 A question ~ how did England become the possessor of all these artifacts?
Don't mean to stir up trouble, but, it is something that persistently crossed my mind. 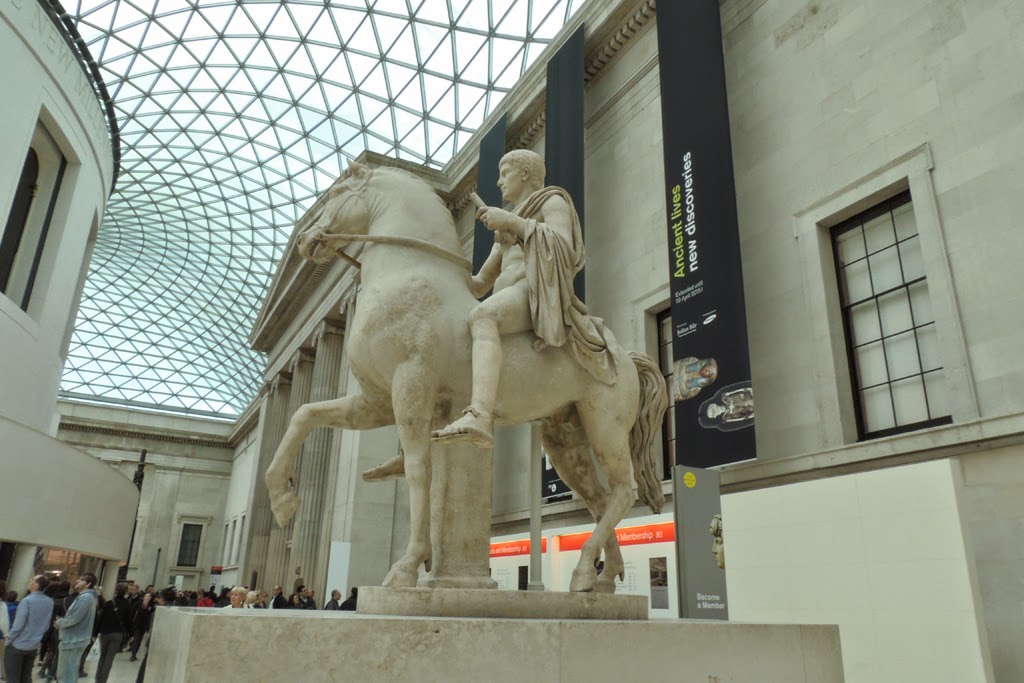 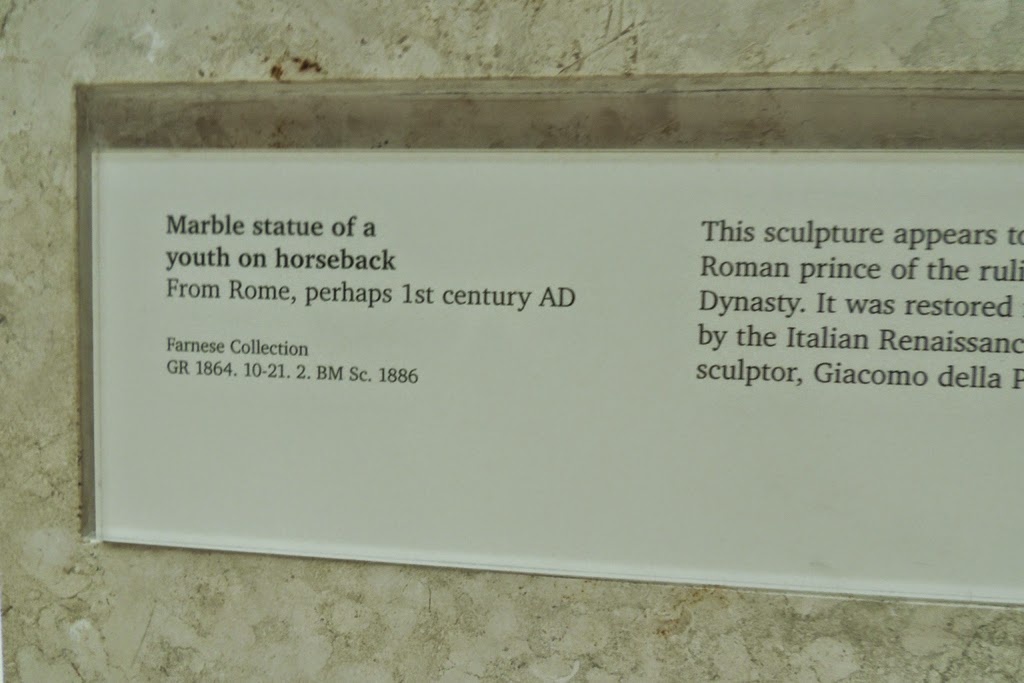 Amazing architecture ~ Austin would have loved London.
How much we missed him on this trip!! 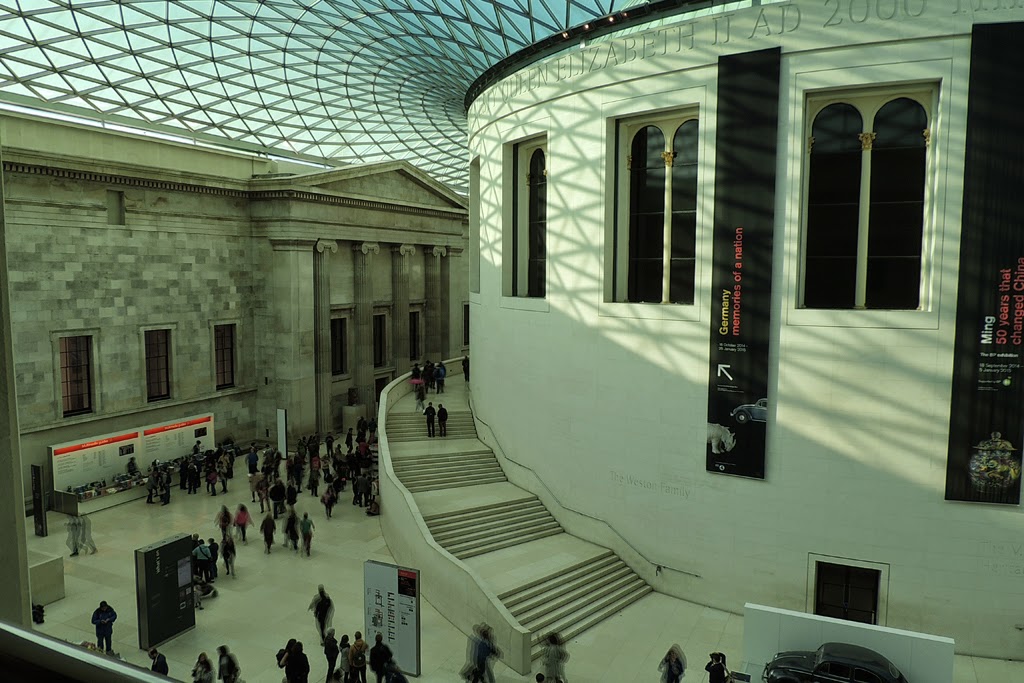 We left the city once again on the underground ~
SO incredibly steep to get down to it!
See me at the far left in this shot with the orange hoodie?
At times there would be a few of these escalators to descend.
Claustrophobia, anyone? 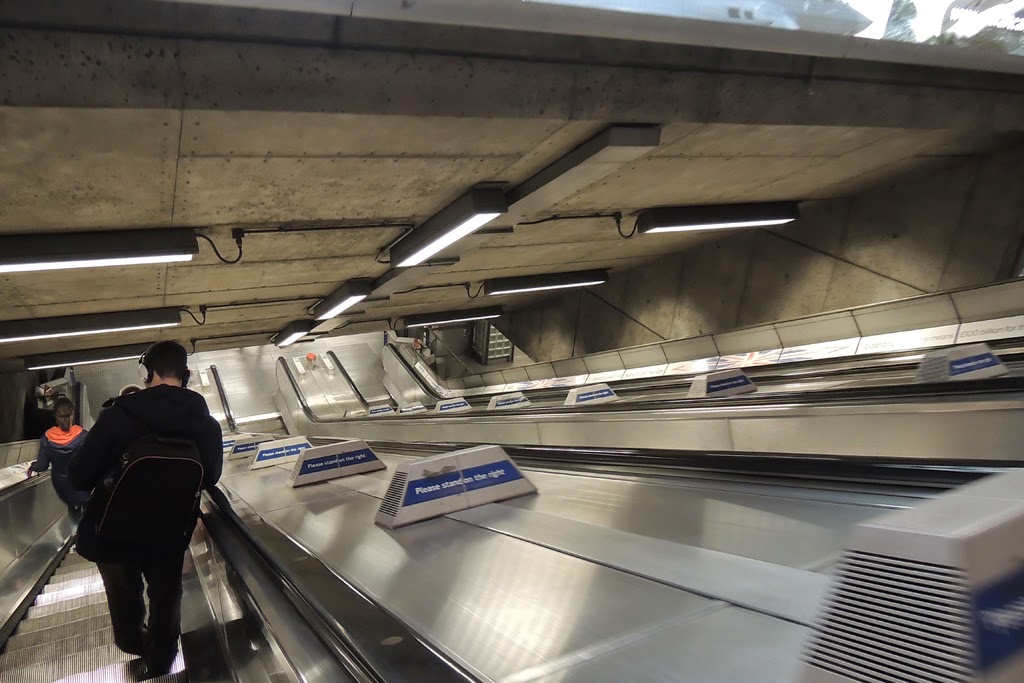 They whizz right by you ~ it's an incredible experience. 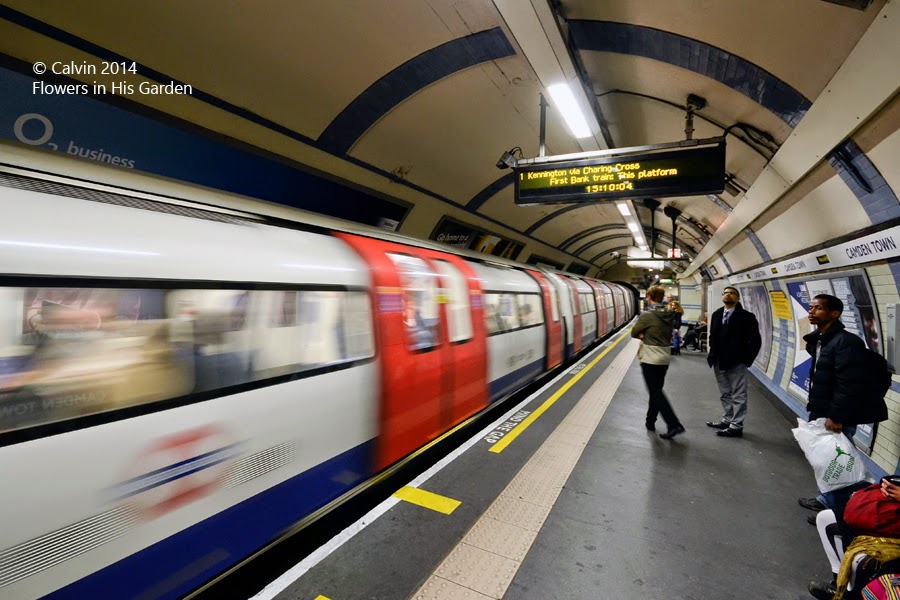 Then, we took the train in order to return to our accommodations
to retrieve our car and make the nearly four hour drive up to Auntie Mary's home. 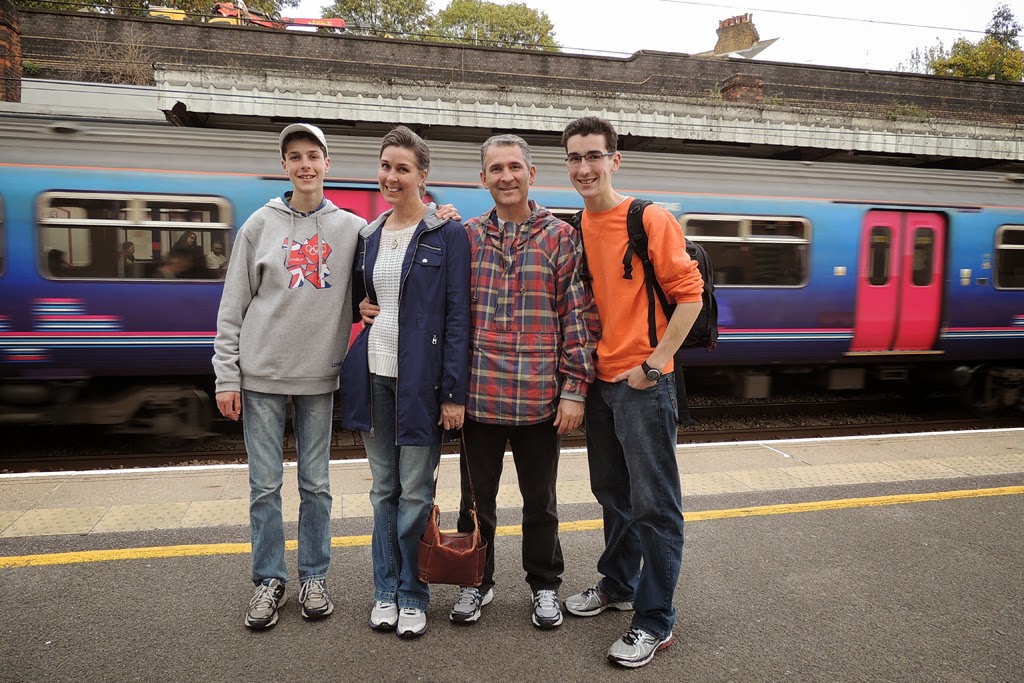 To be continued...
Many Blessings, Camille

**Photos in this post courtesy of my two photographers ~
Calvin and Emma.  Thank you my loves.  xoxo
Posted by Camille at 27.11.14 Labels: Education, Family, Just for Fun, Photography, Vacation

What an amazing trip you've been having. Looking forward to hearing more. I love history so London looks amazing!

Lovely time. The crown jewels are pretty. Interesting that the moat to the Tower was filled with poppies. Looked nice though.

I am enjoying these posts and all the pictures so much!! Thank you so much for sharing your trip with us!! XOXO

I have really been enjoying your trip to London courtesy of the photos, can't wait to see and hear more. It sounds like you all had a wonderful time

I am so enjoying these photos, Camille. What an incredible experience for all of you. I can't wait to see more :) Hugs and blessings!

Ooh another wonderful day of following you and your precious family on this spectacular trip!
Those poppies are quite amazing!
You have been blessed with two terrific photographers. :-)
Sweet blessings my friend.
Debbie

Dear Angela ~ History is amazing, isn't it? You would like London, I am sure. We barely scratched the surface of it all. Thanks for stopping by. :)

Dear Becky ~ Those poppies were beautiful, I agree. I think it's wonderful that they honoured the men who fell in such a lovely way. Hugs. :)

Dear Esther ~ You are sweet, you know that? Thank you for wanting to see the photos....you make me smile. :)

Dear Maryann ~ It truly was a gift from the Lord that we were able to go. Thank you for entering into it all with us via this means. Hugs. :)

Dear Stephanie ~ Thank you, my friend. Hugs to you! :)

Dear Debbie ~ Your kind words are a blessing to my heart....thank you! Hugs. :)

Catching up with the posts about your trip. So many familiar sights from the streets to the tube station. The British Museum is vast isn't it? I do miss the history now I live in Australia and it is amusing to see what buildings they place heritage orders on here. There is a tumbledown shack on a nearby farm. It is not that old, more of an eyesore if one is honest and is barely standing up but the farmer cannot bulldoze it as it has 'historical value'. A trip to England is a must to gain an appreciation of what is meant by historical value!

Dear Ann ~ I hear you on the *historical value* thing! It was interesting to see how some ancient artifacts are treated in England...right down to being able to touch them! :) Things one hundred years old are held in highest honour here in Canada, just like Australia. Hugs, Camille

Camille, I love this so much!!! London is at the top of my list to visit someday! Thanks for letting me live vicariously through you :)

Dear Lisa ~ The Lord has been so very gracious to us...we are thankful that He made it possible for us to go. I hope you all get to go one day, too. Hugs, Camille