So, we drove north for nearly four hours on Saturday
and arrived at Auntie Mary's later than we meant to.
We were so happy to see her ~ have I mentioned that she is precious?
And, she was so happy to see us ~ told you she's something special.
Auntie Mary lives in a little house, but she had
rearranged and adjusted things to accommodate us all.

It's where we were for the next ten nights. 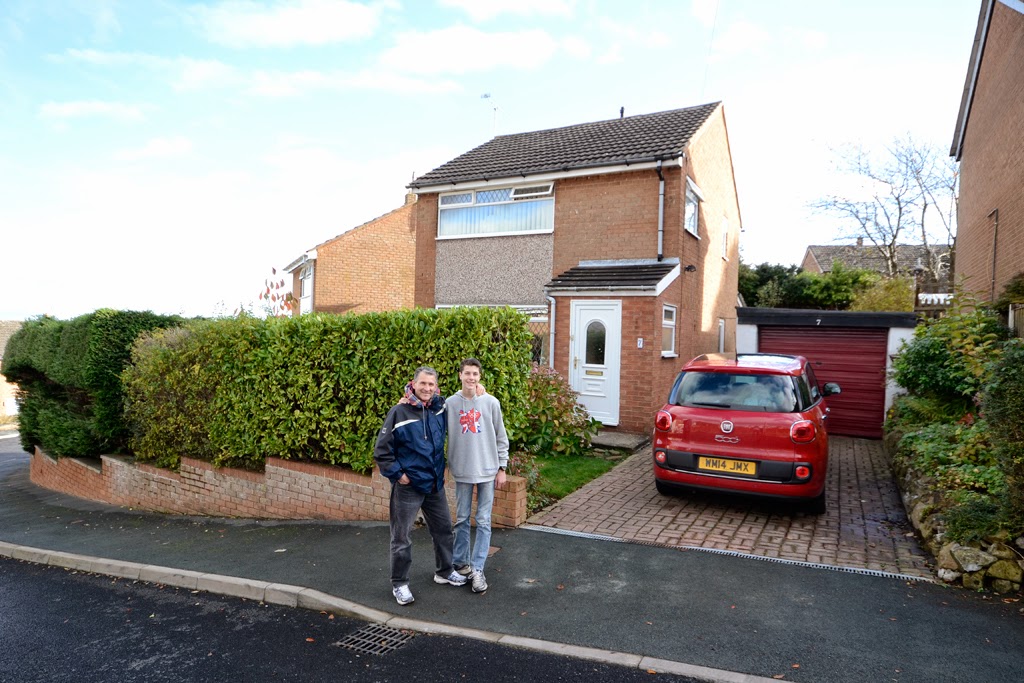 Here we are at the table... 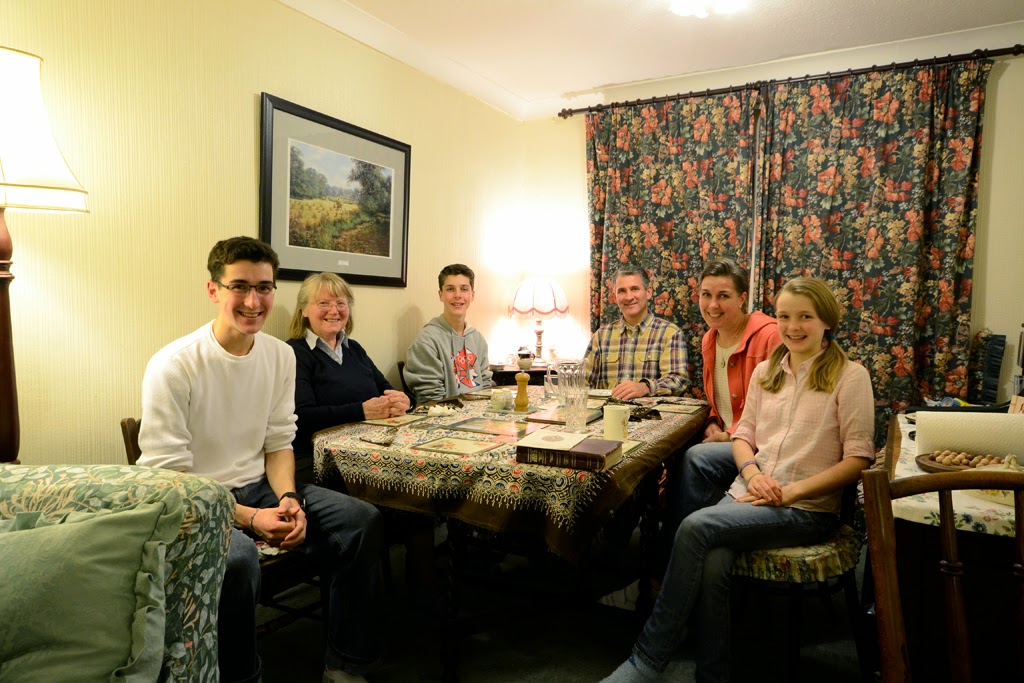 ...and on the opposite side of the room. 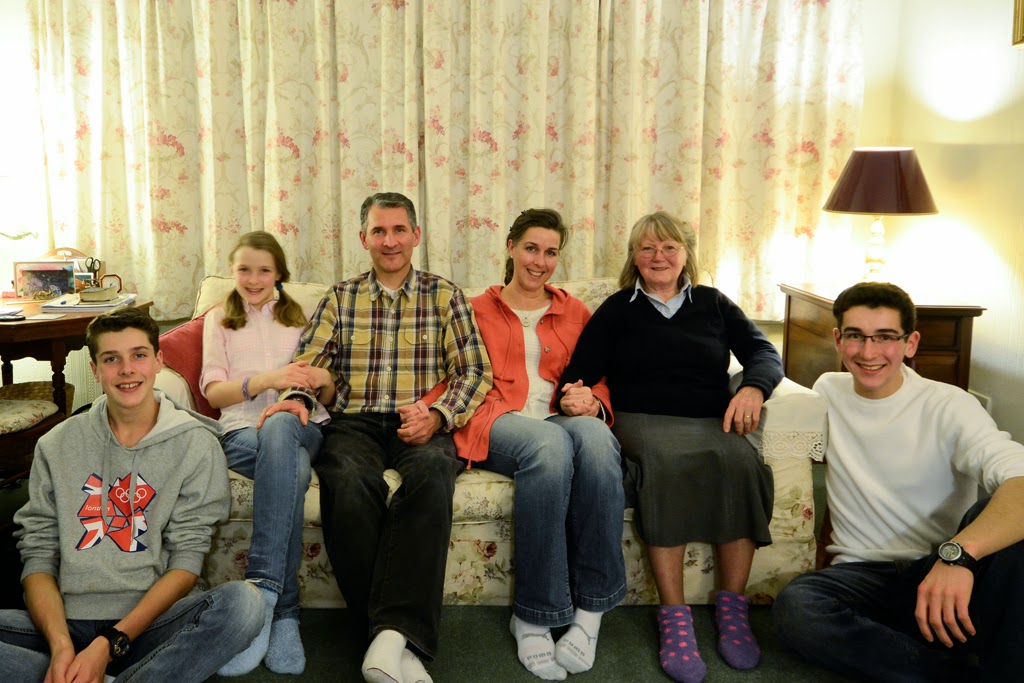 We made a plan and stuck it to the fridge.
And then, we deviated from the plan accordingly.  Of course.
We were, however, able to see and do so many things while we were there.
Apparently Wales has more castles than any other country in the world.
Did you know that?  Driving anywhere usually includes a castle sighting.

Some are in ruins and some are being preserved.
The ruins can be explored for free ~ preserved ones cost.
So, we did some of both. 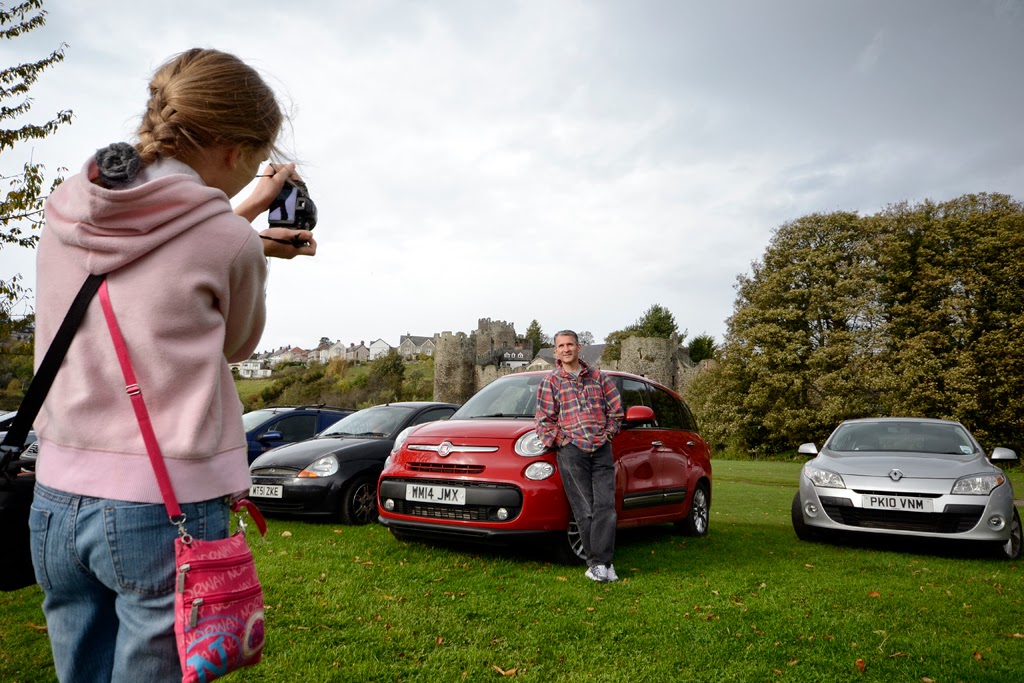 We had a couple of *home* days with Auntie Mary before
venturing out on our sightseeing excursions.
On Sunday, we were blessed to attend church with our Auntie.
Monday, we made a grocery list and shopped for the food we would need.

Tuesday, we went to Conwy Castle.

Auntie Mary woke up with a head cold and opted out.
She had recently been to Conwy, so her thinking was that
if she stayed behind on that day she would be well enough to join us
on our other planned days out.  It worked!  We were happy about that. 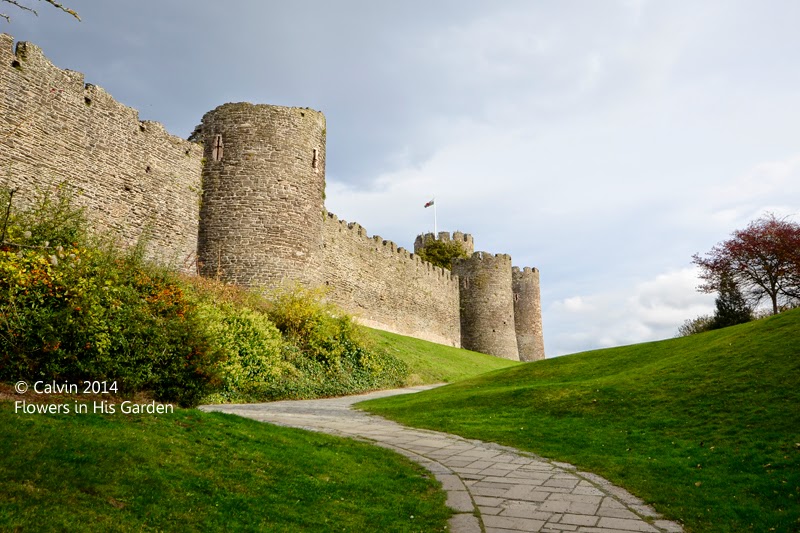 This is the view of the castle as we approached it on the wall. 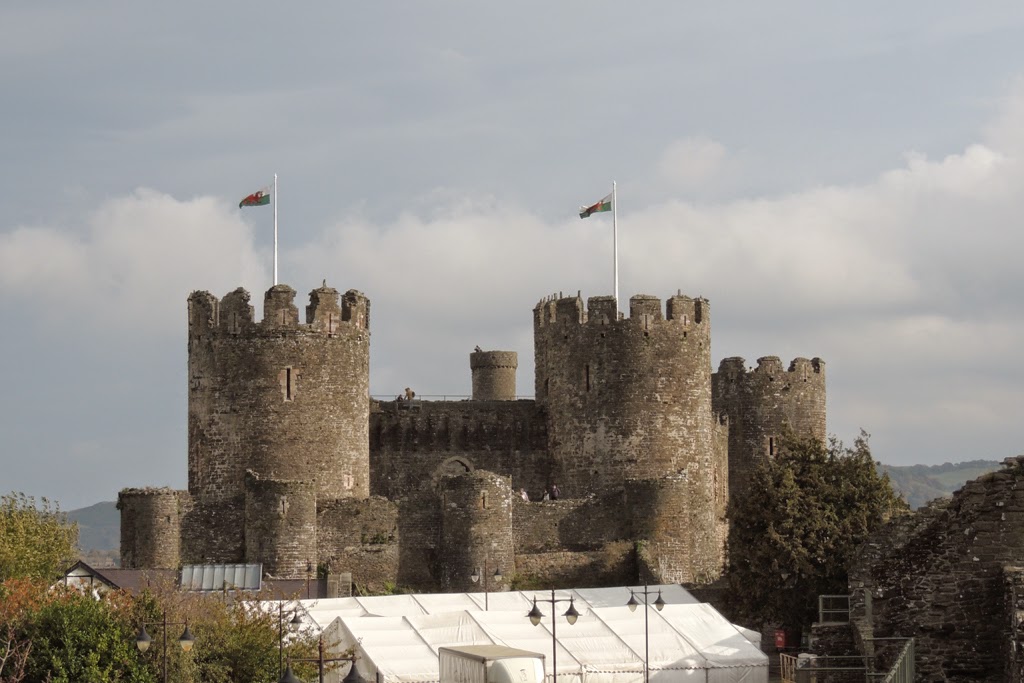 Calvin and his camera were never far apart. 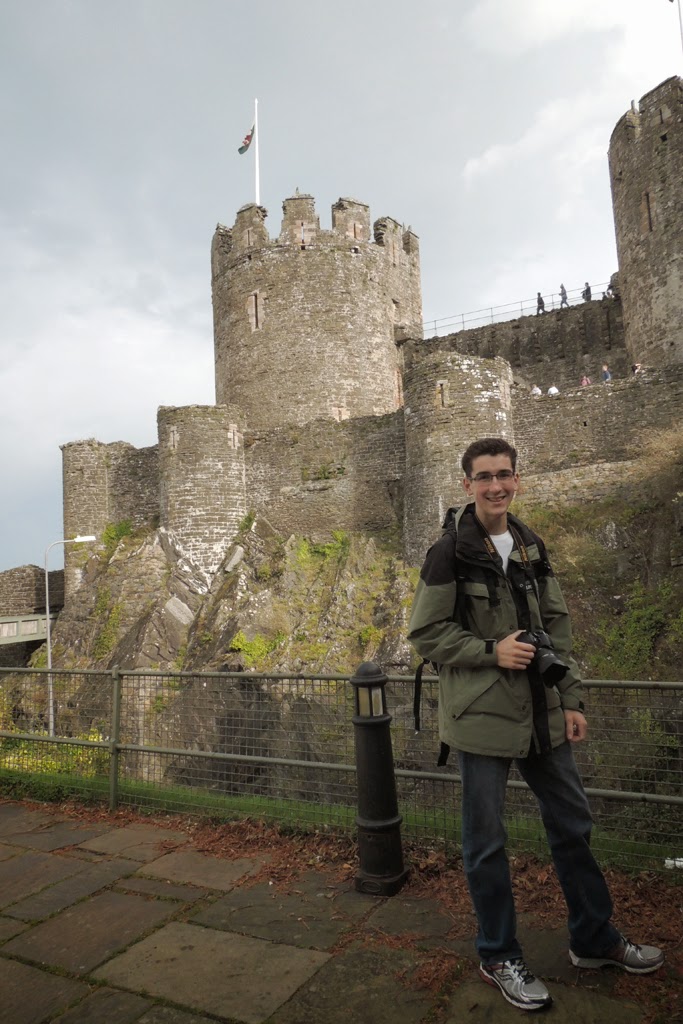 View looking away from the castle toward the bay. 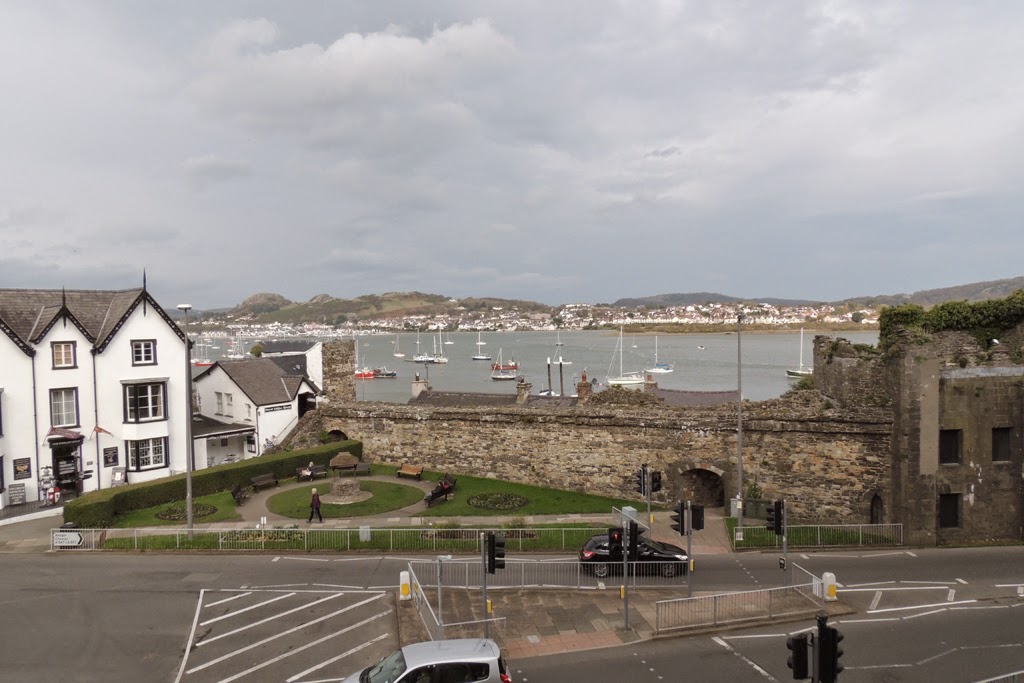 Looking down inside the castle from one of the towers. 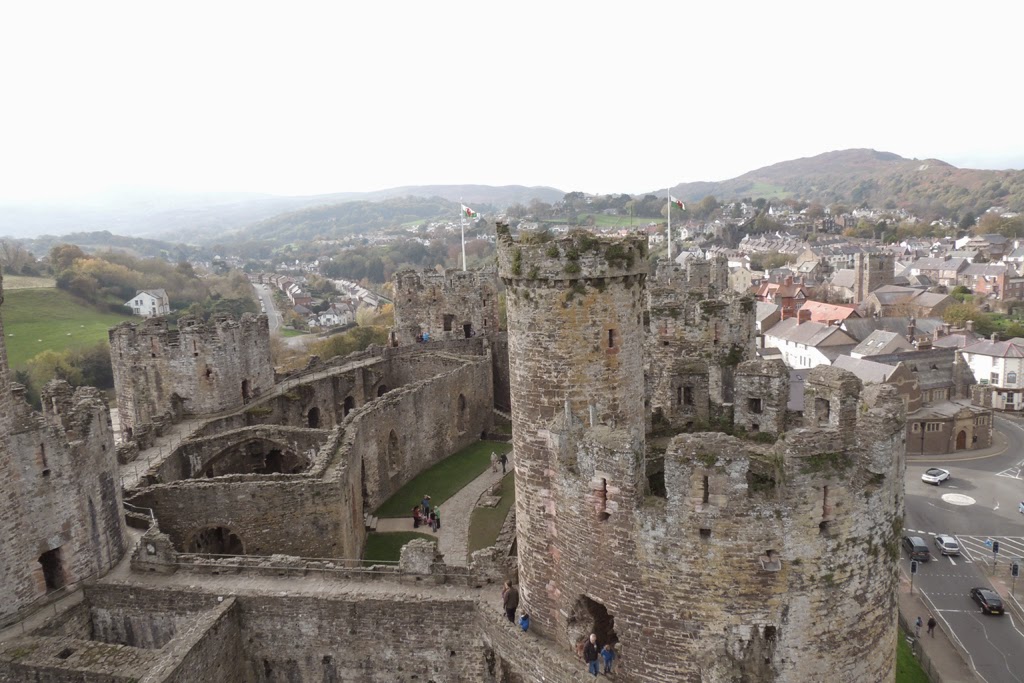 See the Welsh flag waving?
Calvin took the shot below ~ Fraser is gazing out at the view
and Emma is walking toward him.  We were standing on the
edge of a deep hole within this tower.  It was many levels deep. 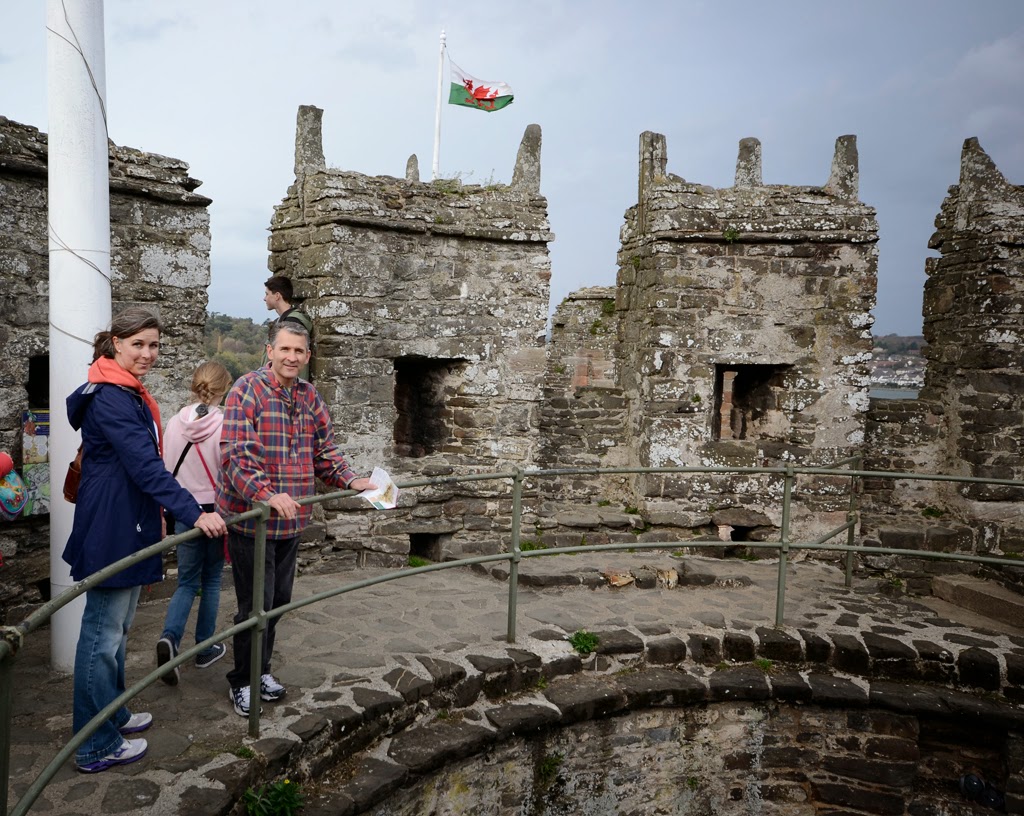 This is what it looked like ~ the view straight down. 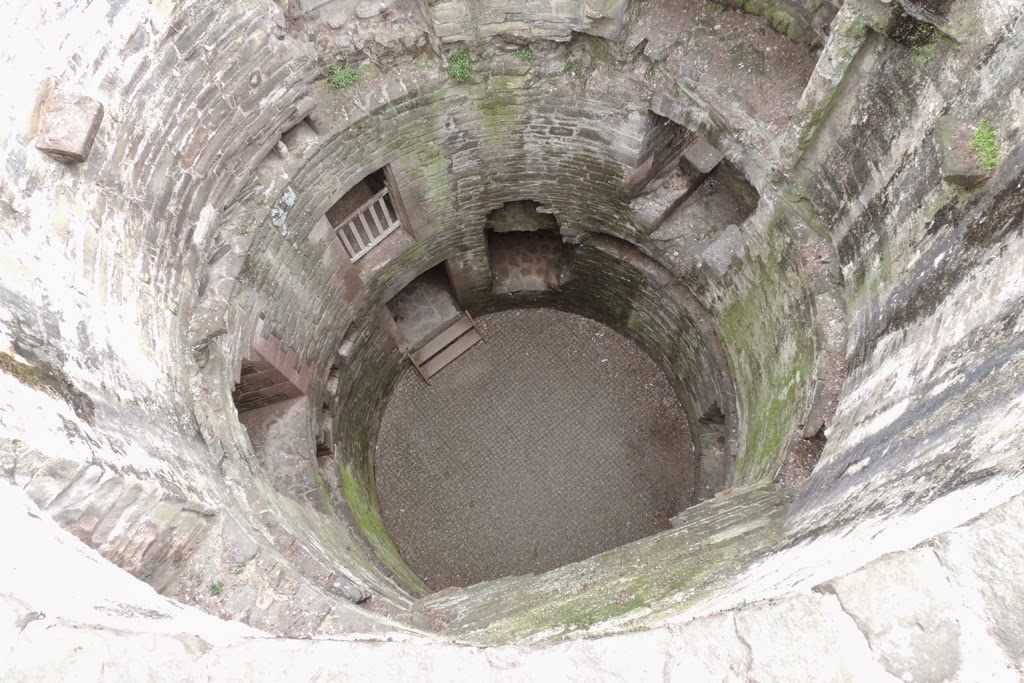 Fraser and Howie with me ~ in the distance.  :) 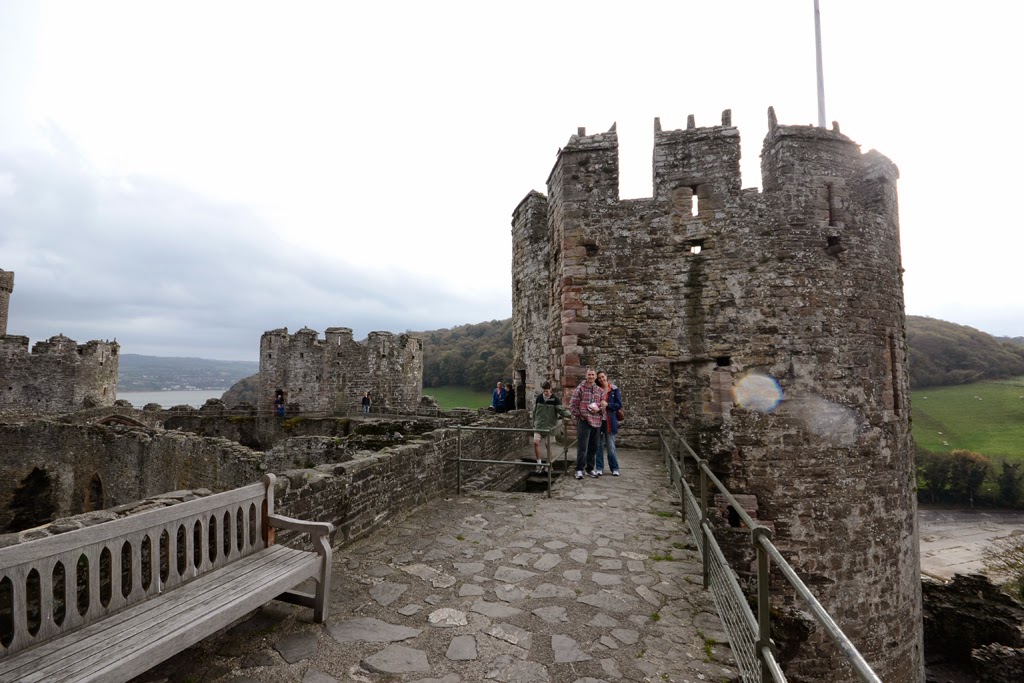 Looking out at the view of the water from the castle wall. 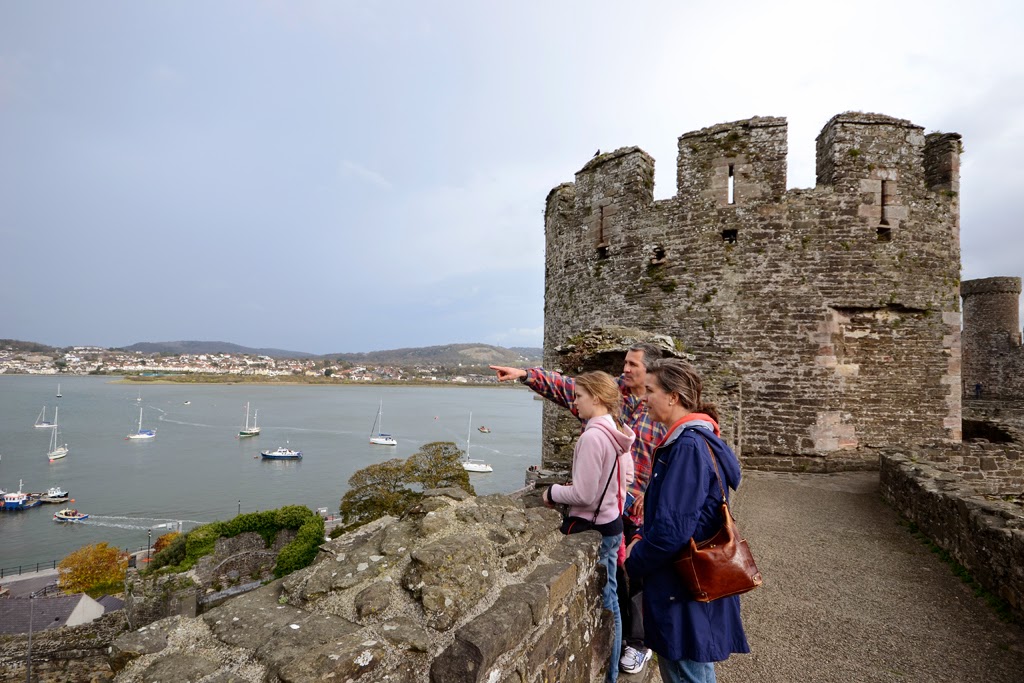 From one end of the castle looking toward the other end. 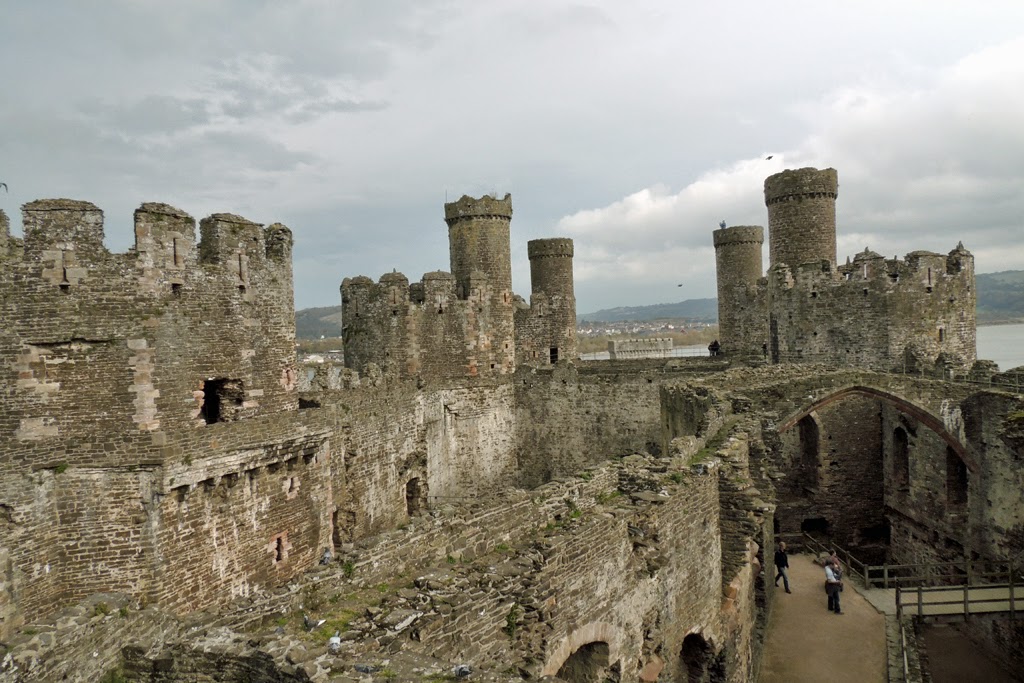 Looking back from the other end ~ the shots above
and below are taken from opposite ends of the castle. 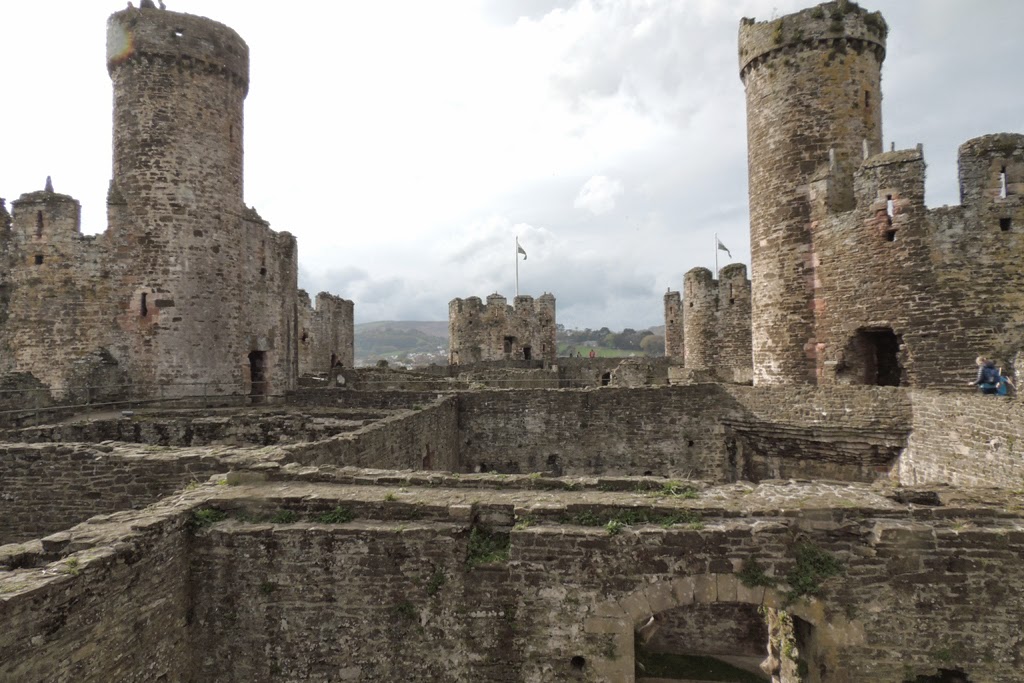 Fraser inside a fireplace or cooking area? 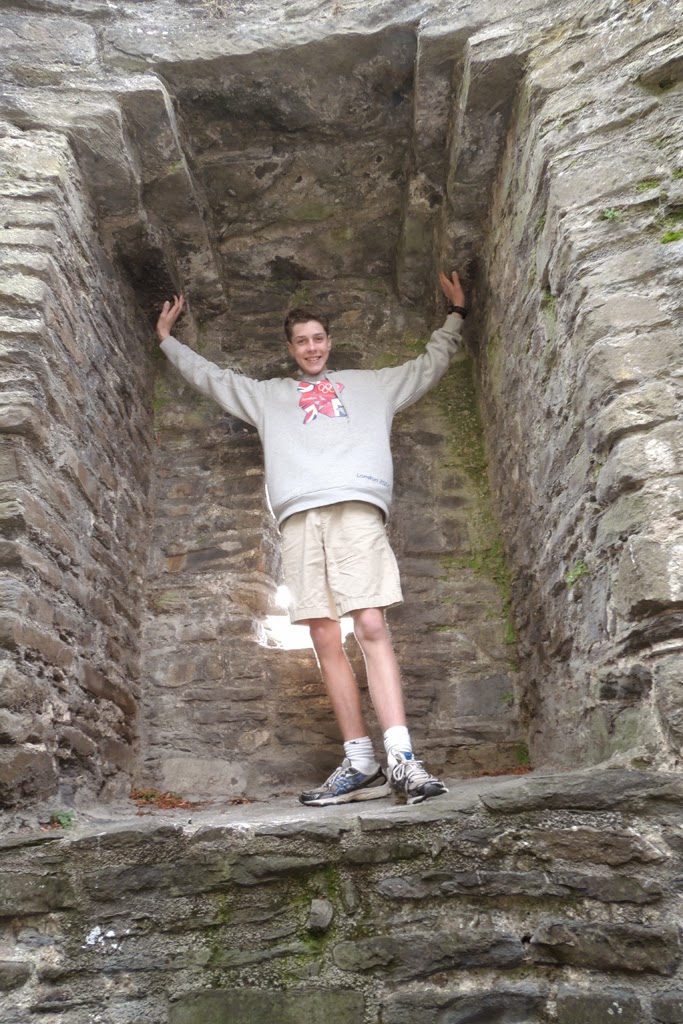 Views of the surrounding countryside from the castle. 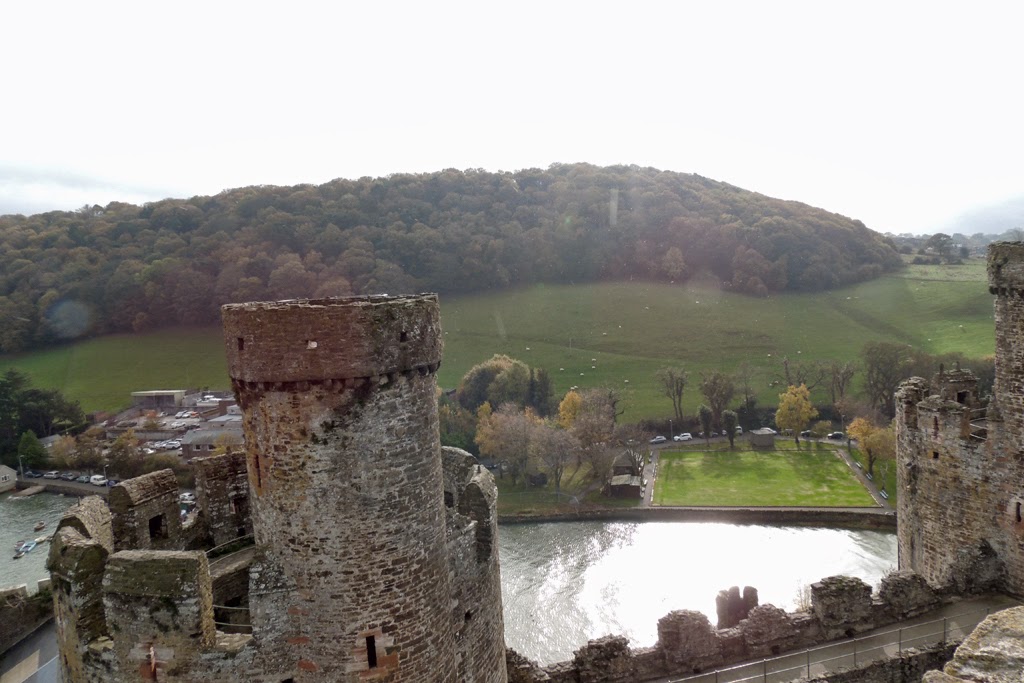 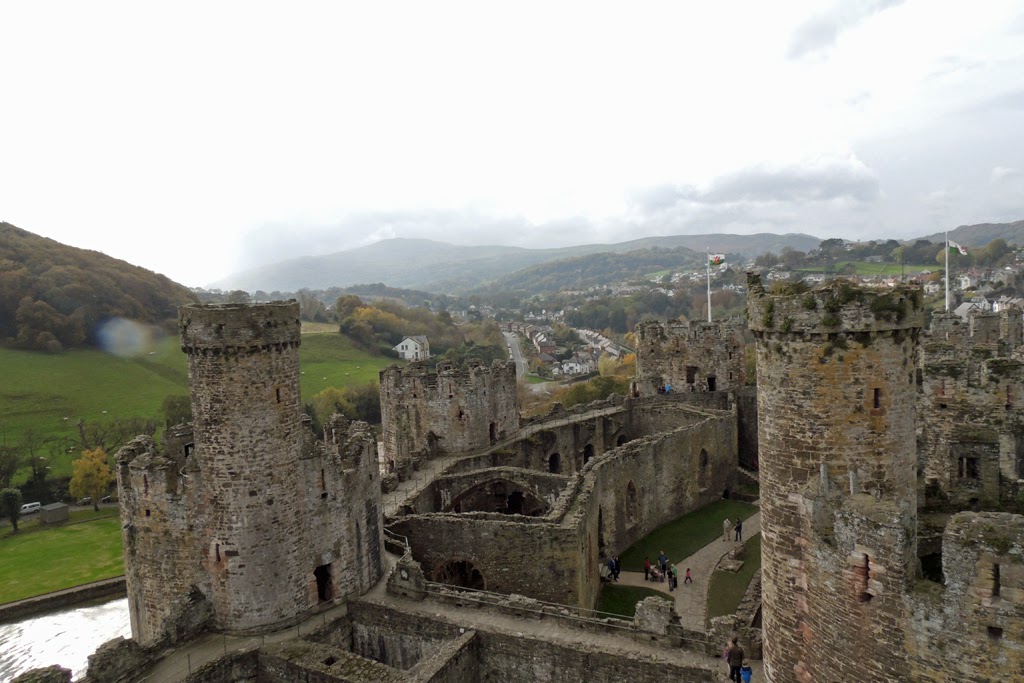 Emma inside the chapel area. 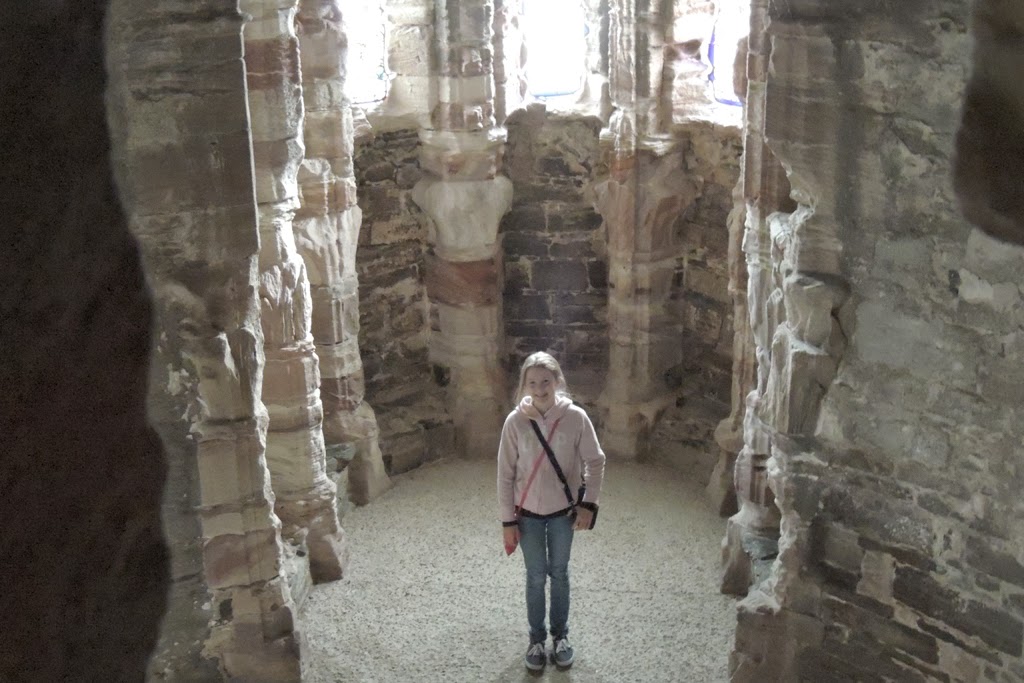 View of the castle from the distance. 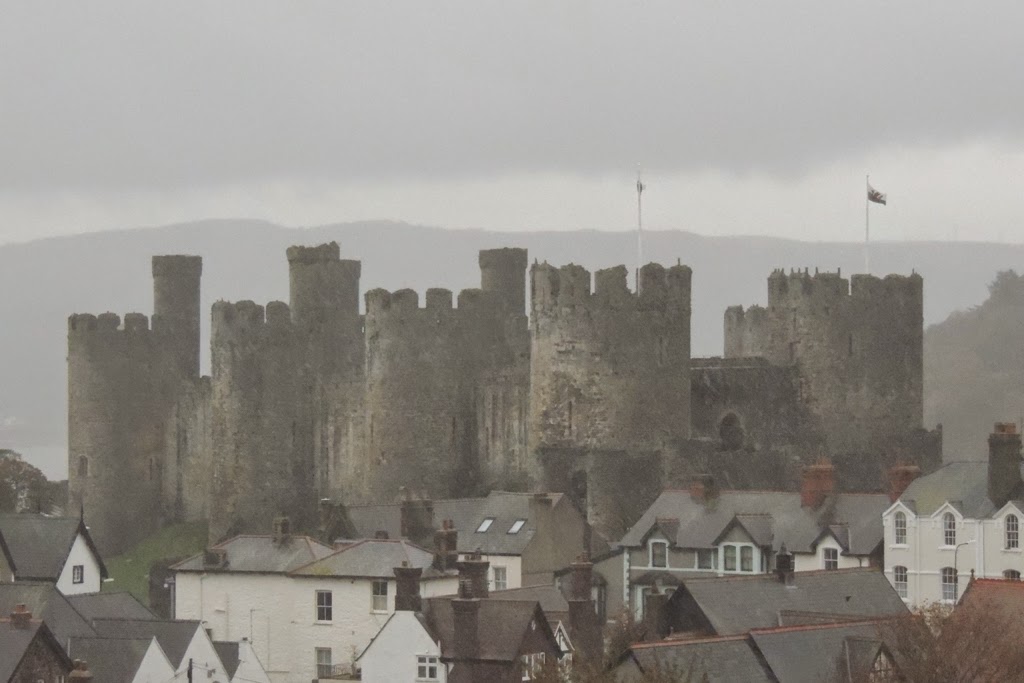 **All photos on our entire trip were taken by
Calvin and Emma ~ thank you for sharing, my loves!  xoxo
Posted by Camille at 29.11.14 Labels: Education, Family, Just for Fun, Photography, Vacation

Even though I've enjoyed immensely the pictures of England, this is what I've been waiting for...your time with your Auntie in Wales. My grandfather's people came from Wales...Jenkins was the name.

It is probably kind of silly, but when I look at these pictures I feel so "at home".

I'm so grateful that you had a wonderful time while you were gone. You've made memories with your children that they will never forget!

Hugs to you, my sweet sweet friend. You all are in my prayers much these days.

Wow Camille you are having new adventures! I love all the pics! I am sure this was a blessed time for you and your family. Your guys are really growing up! Lots of hugs and blessings Pippa

Again you have shared with us done fabulous photos! Done make you feel as of you are right there on the midst of it all.
Your Auntie looks like she is a sweet and precious lady. How wonderful for all of you to be able to spend time with one another. You will have so many wonderful memories, Camille.
This has been a delight following your trip!
Much love to you, Debbie

How wonderful that you have gotten to take this trip. I am loving all of the pictures, and have scrolled all the way back through the previous posts. The castle is amazing. I lived in Wales when I was about 4 years old. I have a vague memory of it; it was pretty and woodsy where we lived. Lovely post.
Blessings,
Pam

When I saw your blog appear in my reader my first thought was, "Yippee, more pictures!" :)

These photos are truly magnificent!

Hugs to you, dear Camille!

Nice castle. Seen it. Loved all them but am glad for a warmer place to live. Thanks for sharing.

I am loving all these photos, I am sure your Auntie will treasure this visit that you and your family made to see her. Wonderful memories my friend, glad you all decided to make the trip

Dear Dianna ~ Awww...that's sweet that you have been following along and *waiting* for this part of the journey. :) I hear you on the *at home* thing...my husband says the very same thing. Hugs. :)

Dear Pippa ~ Isn't it amazing how quickly they grow and change? It makes my head nearly spin at times...I know you know what I am talking about. Hugs to you! :)

Dear Debbie ~ Thank you for joining us in the remembering of it all. And, I am so happy that you have felt as though you were seeing it with your own eyes...that makes me smile. Hugs. :)

Dear Pam ~ Wow? You lived in Wales? What a fun thing to know about you. :) Thank you for visiting...I know it's been an incredibly busy time for you. Hugs and prayers. :)

Dear Stephanie ~ Your sweet words made me smile...thank you for your encouragement to our budding photographers...it all means a lot. Hugs to you! :)

Dear Becky ~ Ah, yes...warmer than a castle, that's for sure! I suppose those very large fireplaces were put to good use in the days when those castles were occupied. :)

Dear Maryann ~ We are so thankful that the Lord made it possible for us to visit our sweet Auntie. Thank you for your kind words. Hugs! :)

These pictures are stunning! Can't tell you how much we're loving all these posts :) Such a beautiful country!!

Dear Lisa ~ SO glad you are enjoying the photos, my sweet friend. Hugs! :) With Love, Camille