Following our *plan* meant that we had busy days
interspersed with quieter ones ~ it was a good thing.

However, Auntie Mary had been planning for us to come
for so long that she had a month's worth of activities in her back pocket.
Half way through our time with her, she lamented that we
were not staying for a longer visit and promptly informed us
that we were to come back within the year!!
We had a chuckle over that one as we know that it is not likely to happen.

So, we made the most of it.

I kept checking in with Auntie Mary.
"Are we tiring you out?"  "Are you managing all right with us?"
"You can take another day off, if necessary."  But, she didn't.
She joined us everywhere we went after her one day off.
Told you she is sweet.  And, a real trooper!  :)

(On a side note ~ she doesn't have a computer,
so, likely will never know all these things I am saying about her.
It's all true.  And more.  We feel incredibly blessed.)
One of our outings took us to the Quarry Bank Mill. 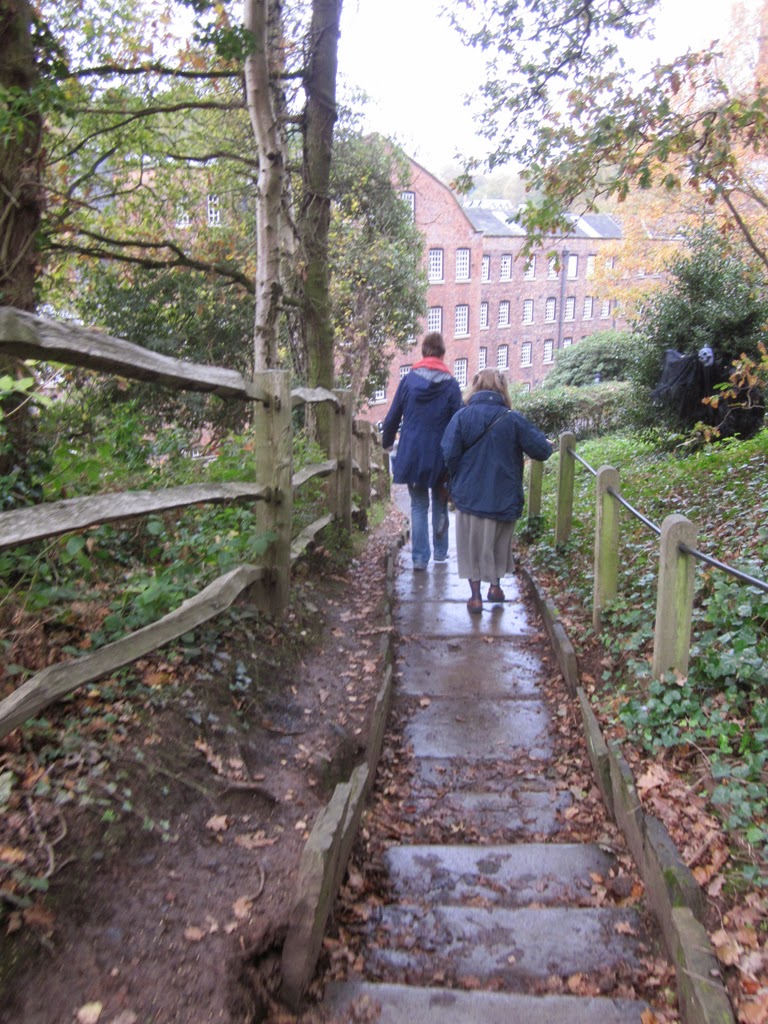 It was an incredible site full of beautiful historical artifacts. 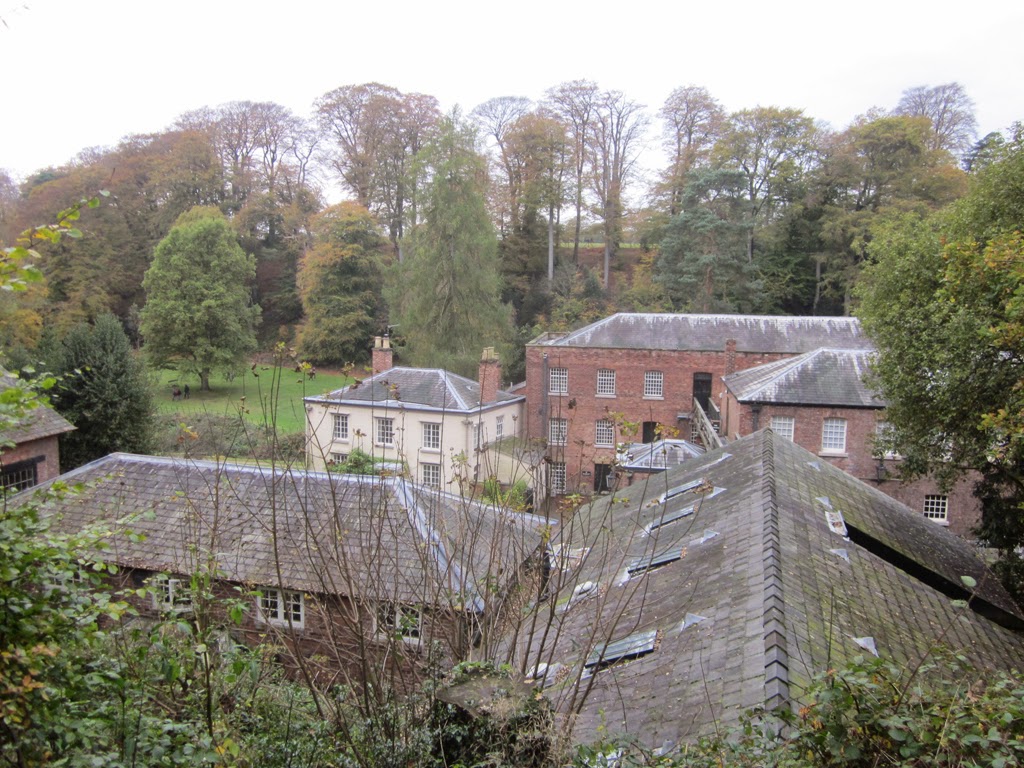 Emma did say, however, that it felt like we were on a field trip ~
Yes, we were...one big giant field trip!  So much history in the UK. 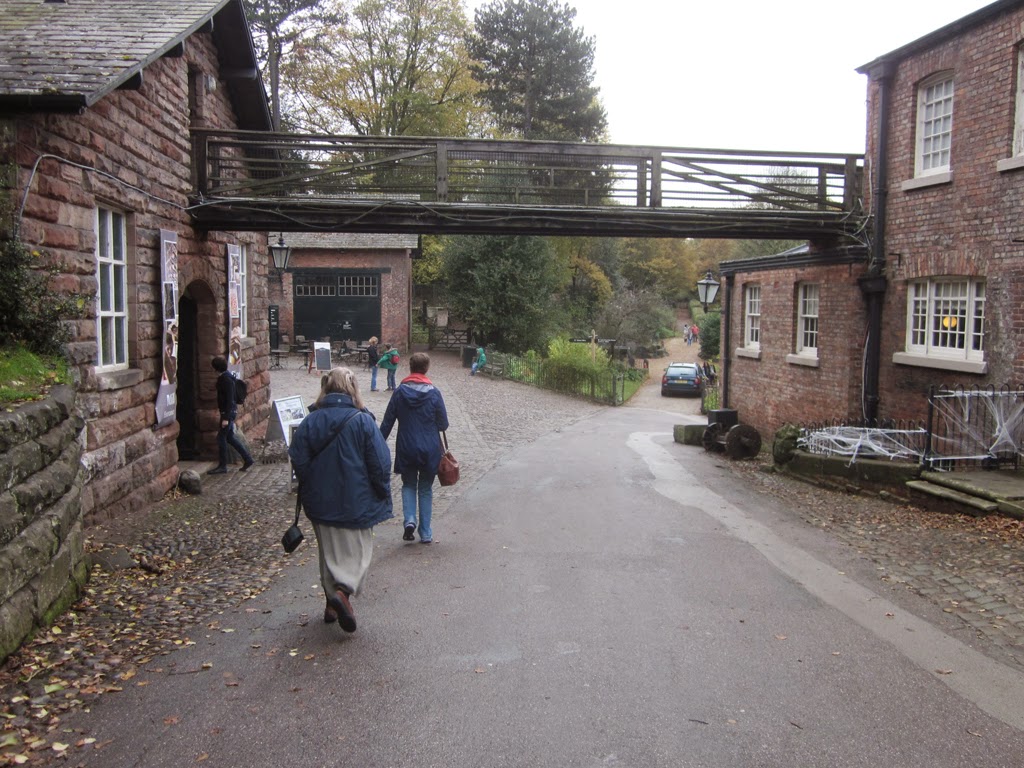 This was a reproduction of the main living area in a cottage where
a family which would have been employed at the mill would have lived. 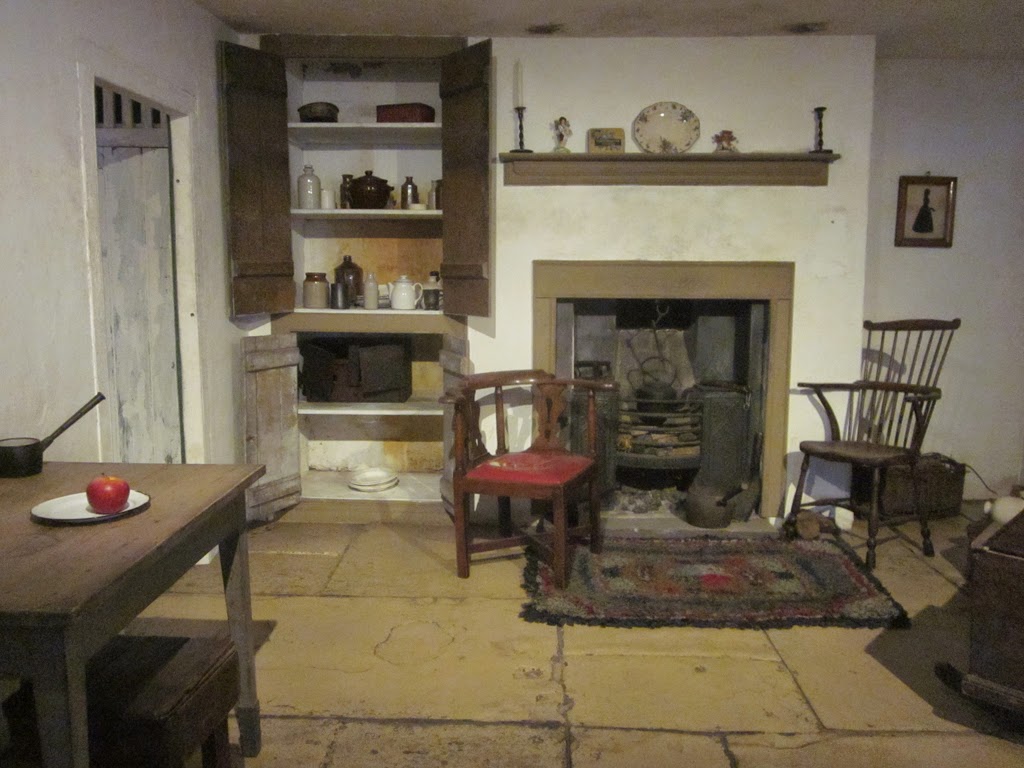 This is a row of cottages that were built for the mill worker families.
These are National Trust properties and are currently occupied by tenants. 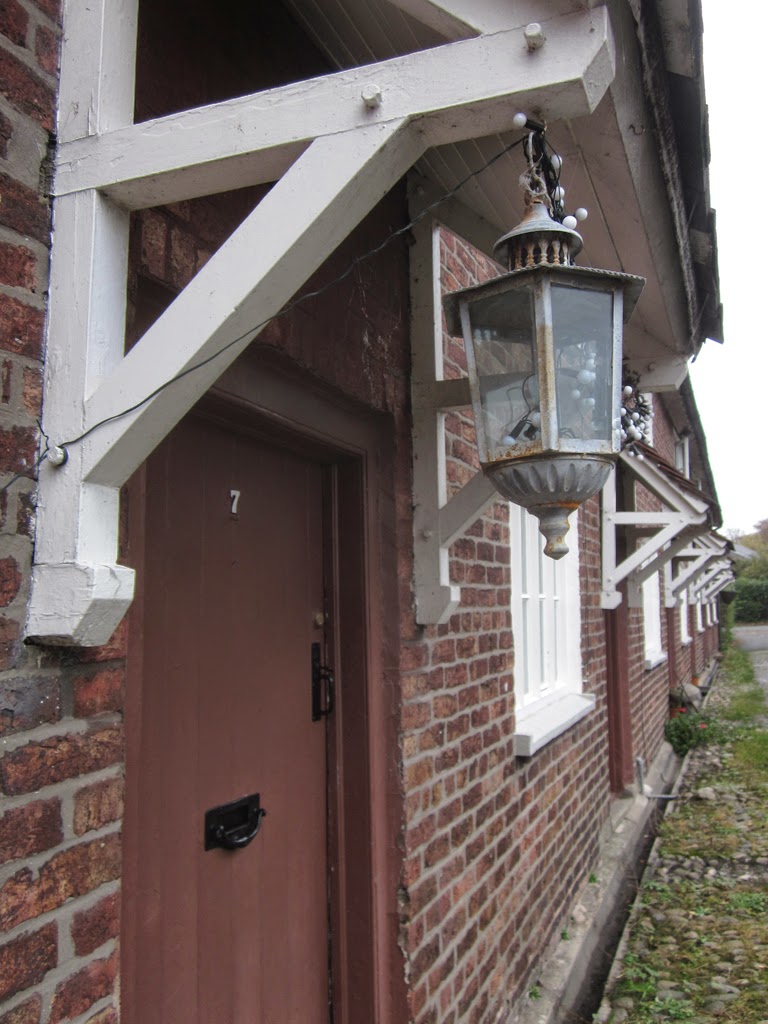 Walking down the lane back toward the parking lot ~ beautiful! 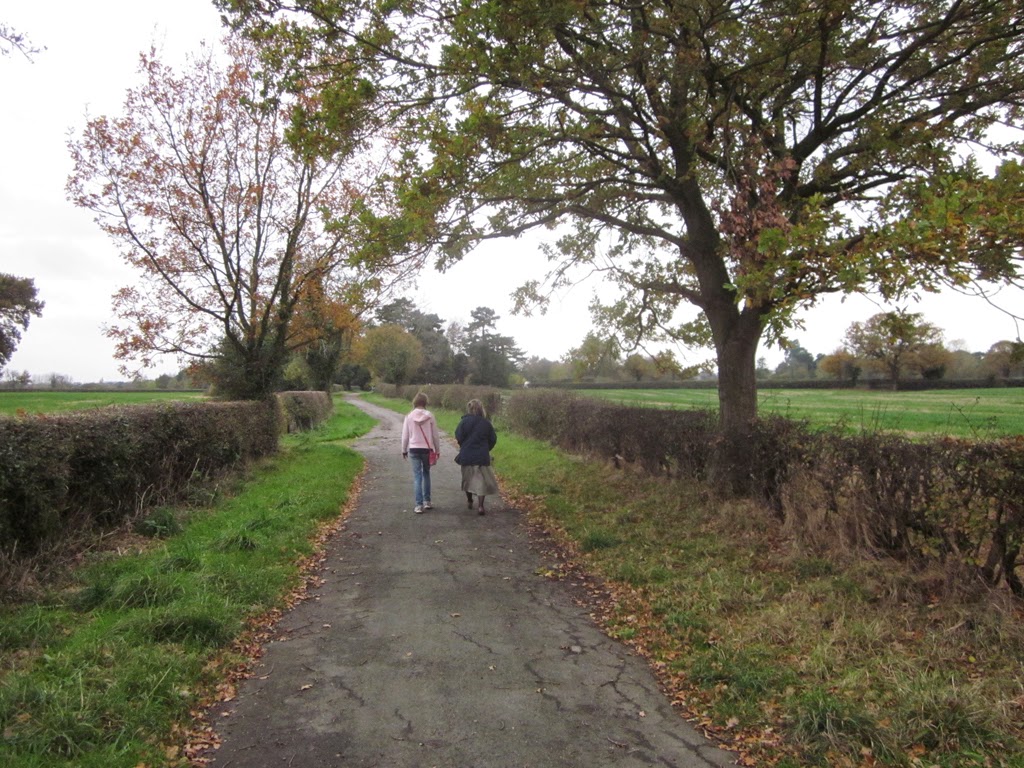 On one of our *quieter* days, we ventured
over to the town of Ruthin where a ruined castle lives.
On the way, this is some of what we saw out the window of the car... 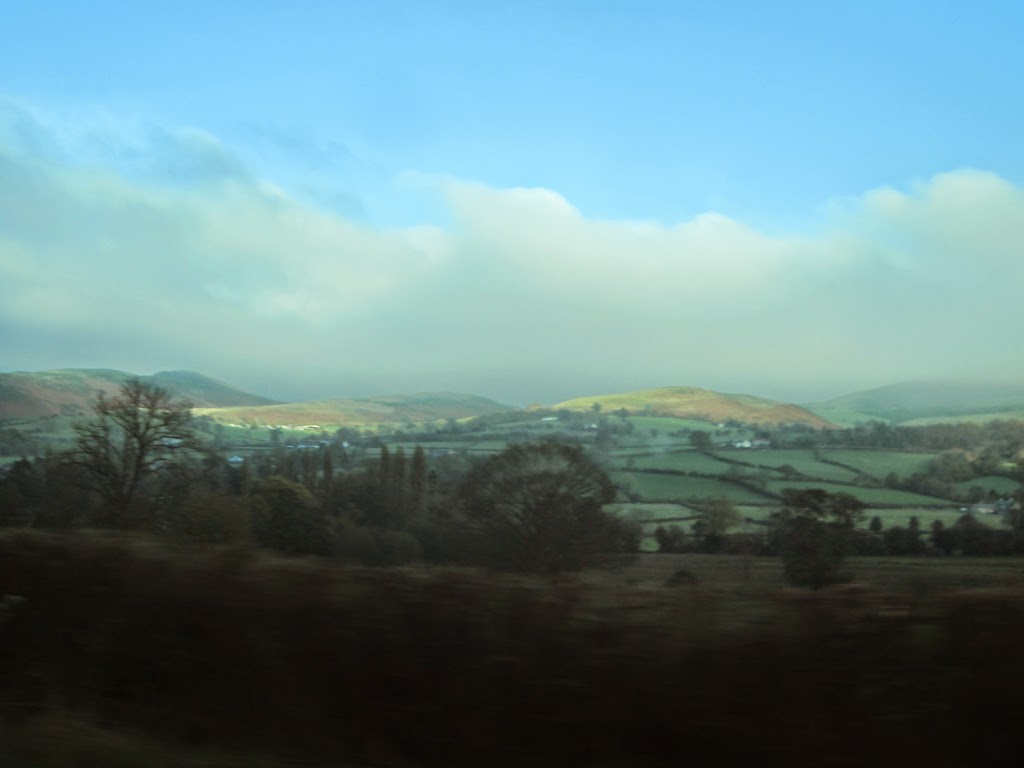 Walking up through the little town toward the castle entrance.
There is a newer (nearly 200 years old) castle build on the edge of the old.
They even incorporated the original kitchen into the new castle. 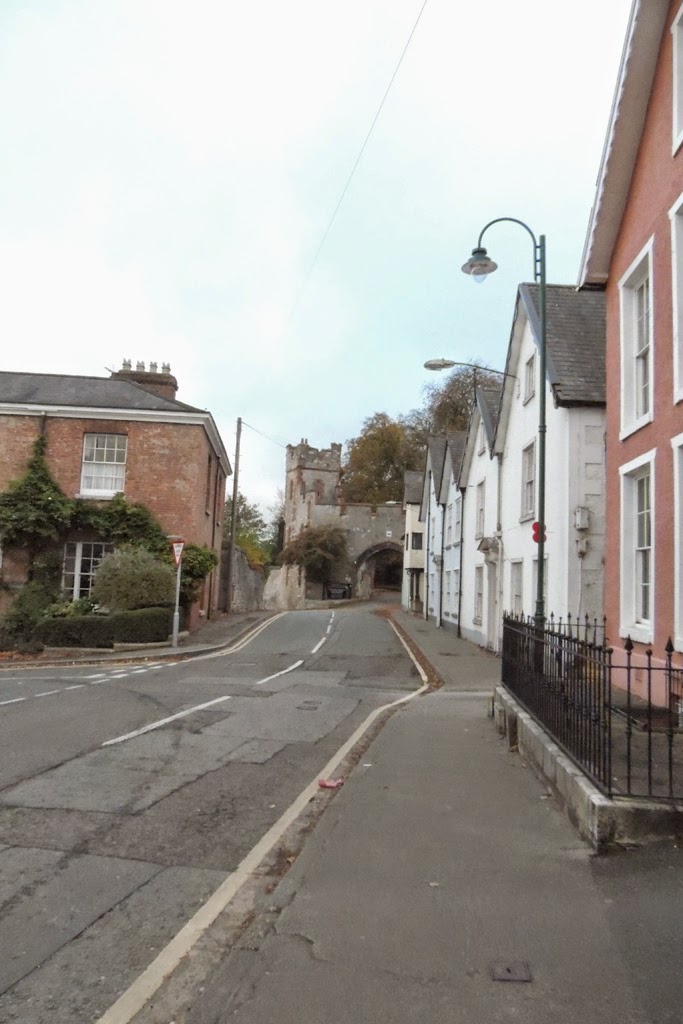 One of the original walls ~ crumbling away. 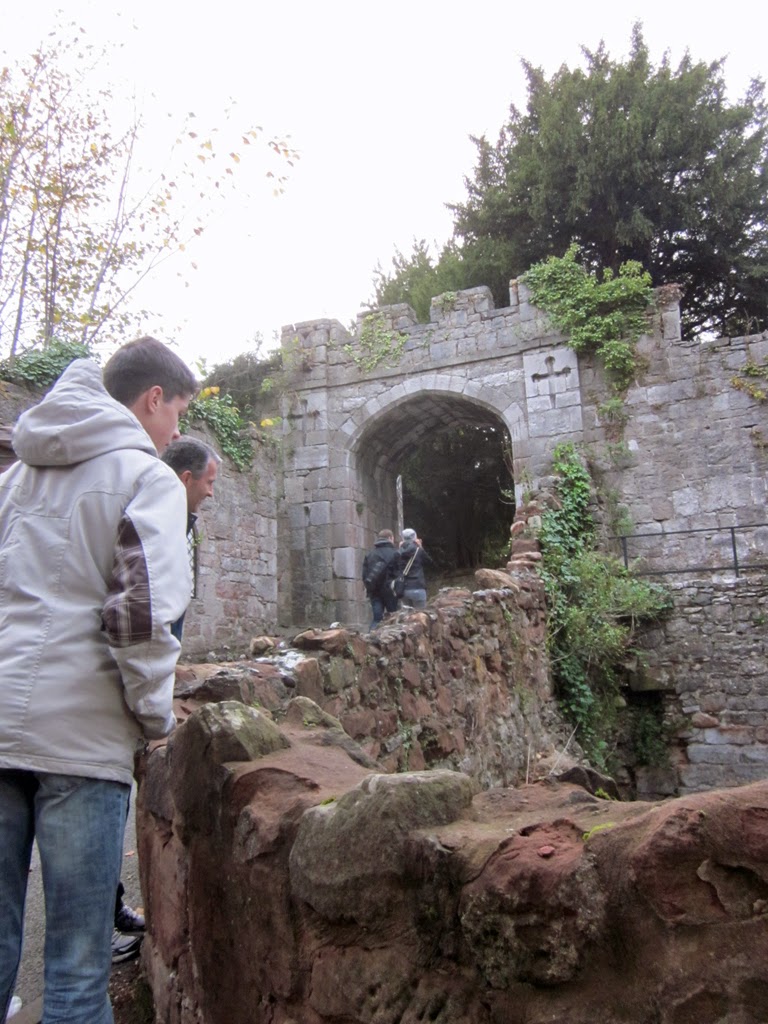 This is looking down over the edge at the original entrance to the castle?
Do you see a tower directly below the cedar hedge trees in the centre of the shot?
It seems to be the tower where the children explored a spiral staircase. 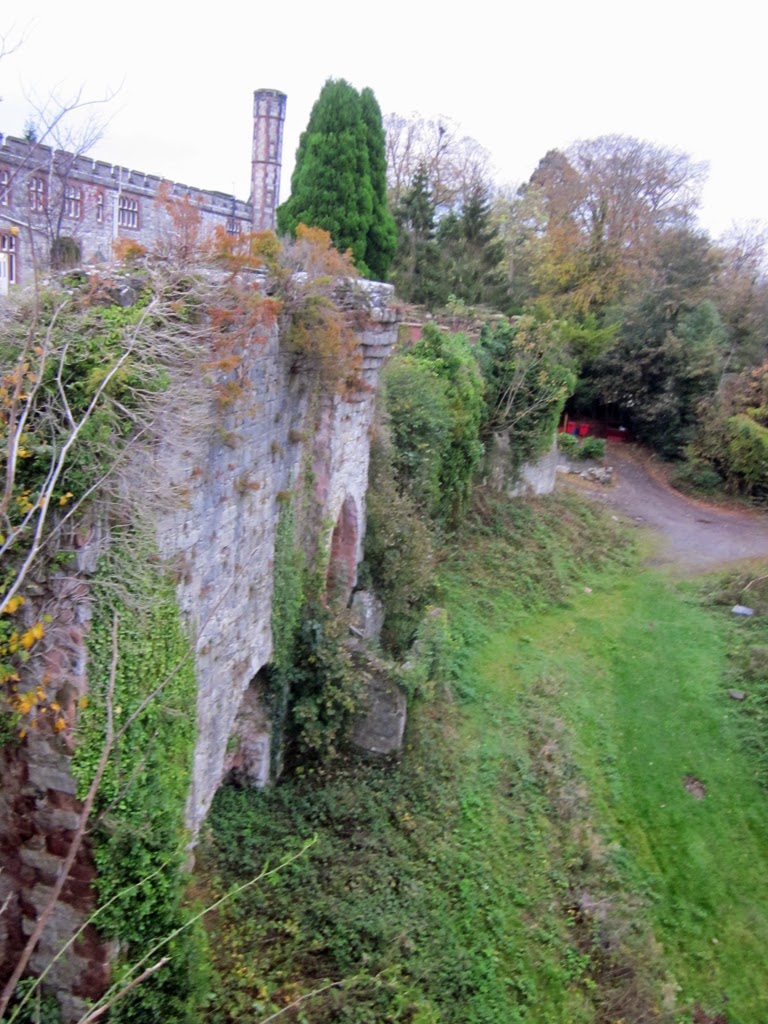 A little scary, don't you think?
This was illuminated by the camera's flash ~
without a light, it was pitch black down there.
Calvin, Fraser, and Emma ventured down to the very bottom!
(As I figure it, it seemed to be the full height of the wall in the above shot.) 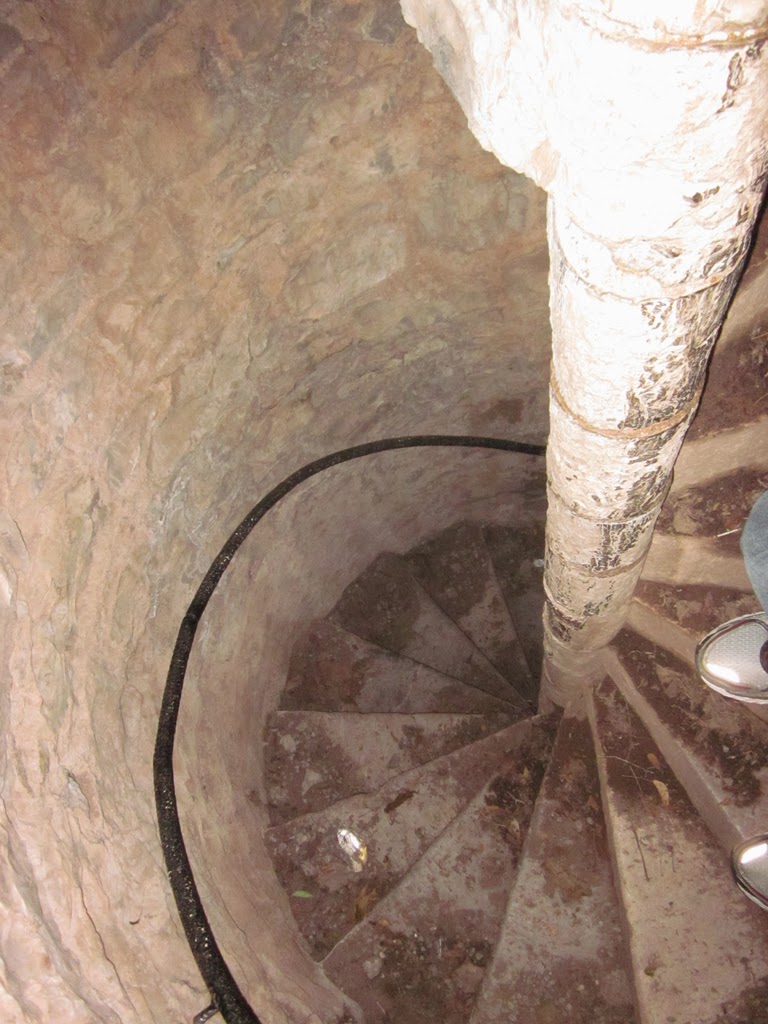 Here we all are safe and sound on the top of that wall ~
this is the wall over which the photograph two up was taken.
Calvin was our self-timed photographer ~
he had just set up Emma's little point and shoot camera and ran.  :) 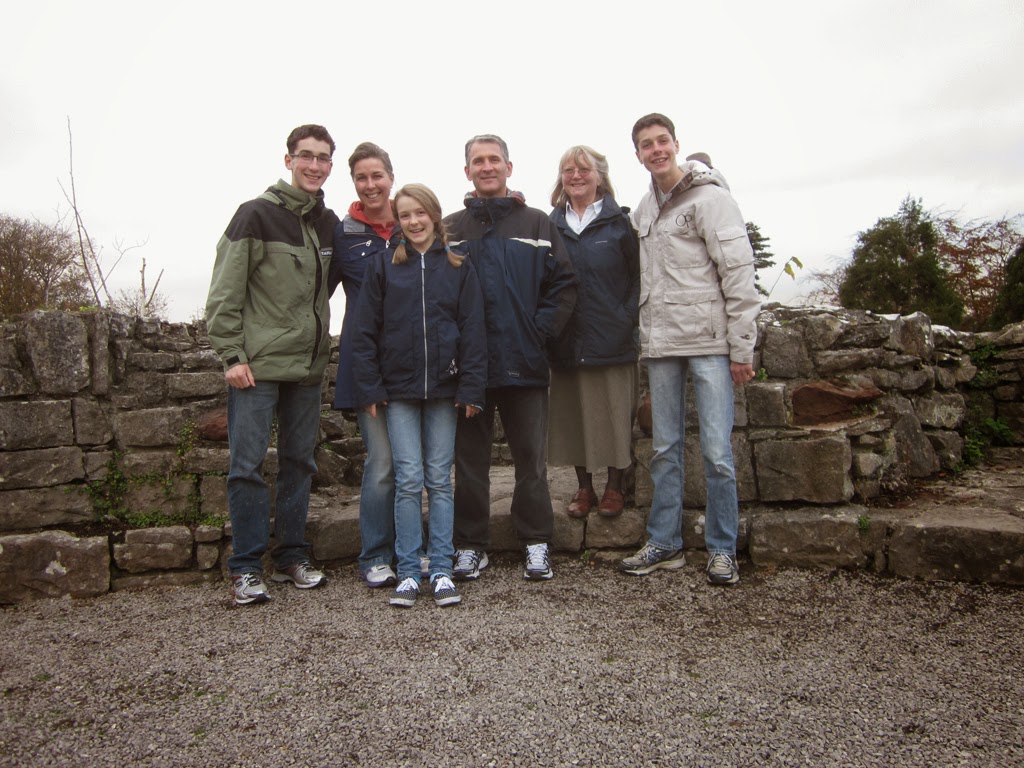 There were passages that led to dungeons to peer into. 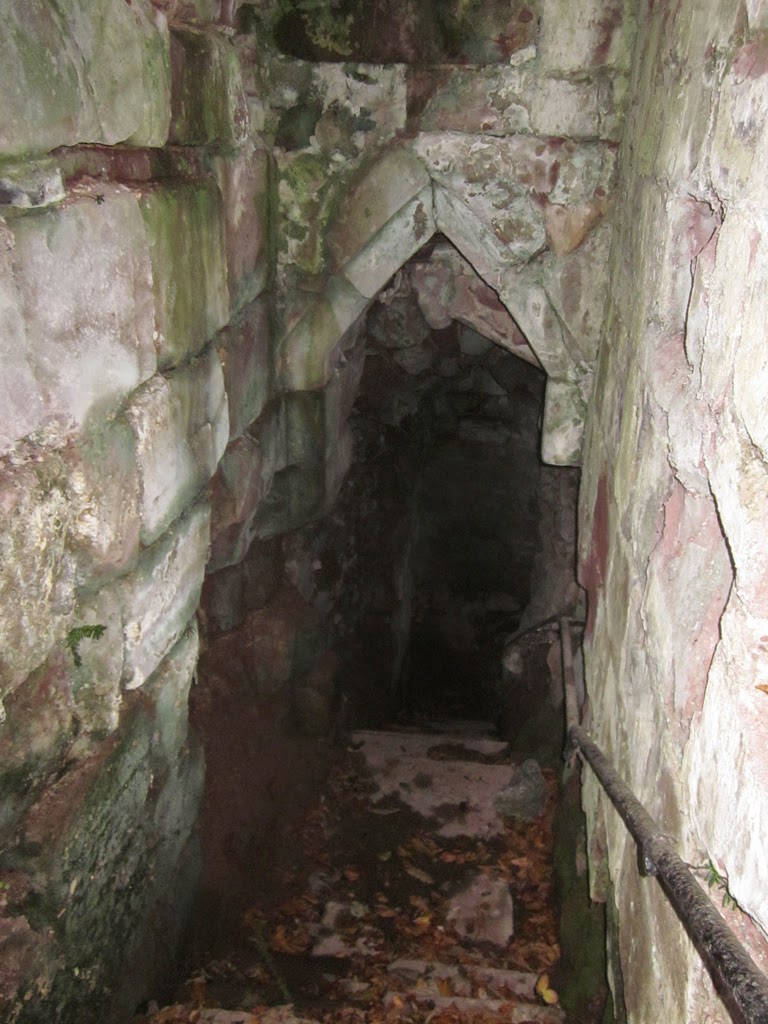 There was even a barred window into that very same dungeon ~
see it at the bottom of the wall in the photo below? 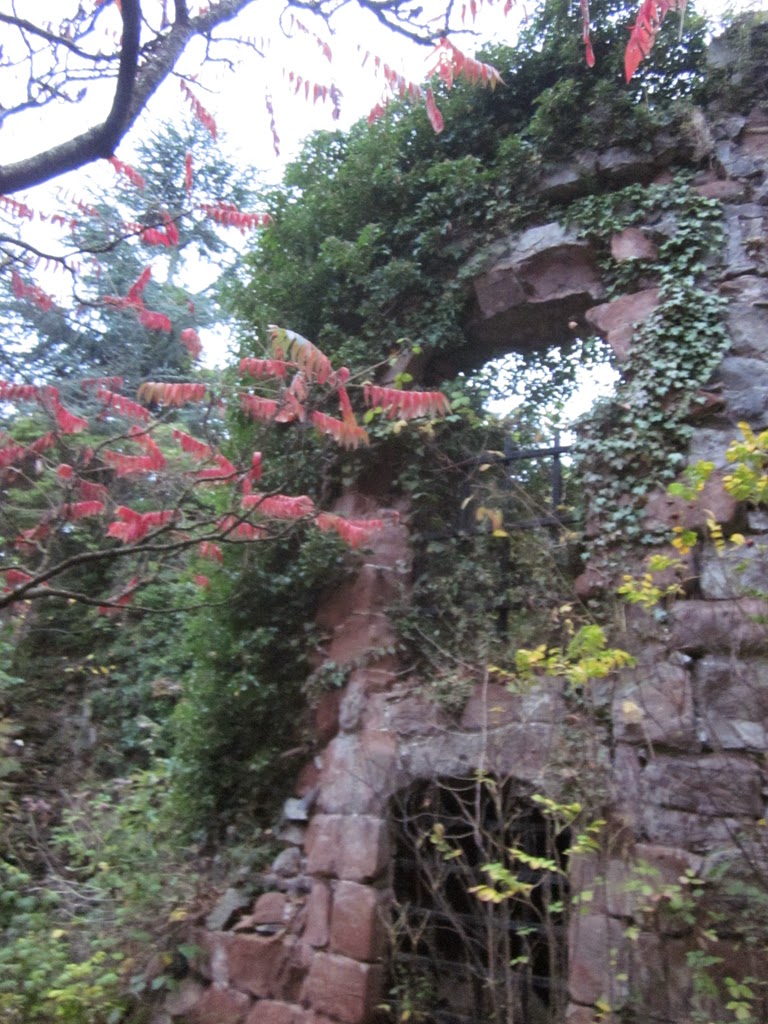 This is the view looking through the window shown in the shot above.
Apparently, just a few days (or, weeks?) prior to our arrival,
the roof had fallen in on a portion of this dungeon and
work was being done on it to make it safe.  Hmmmm.... 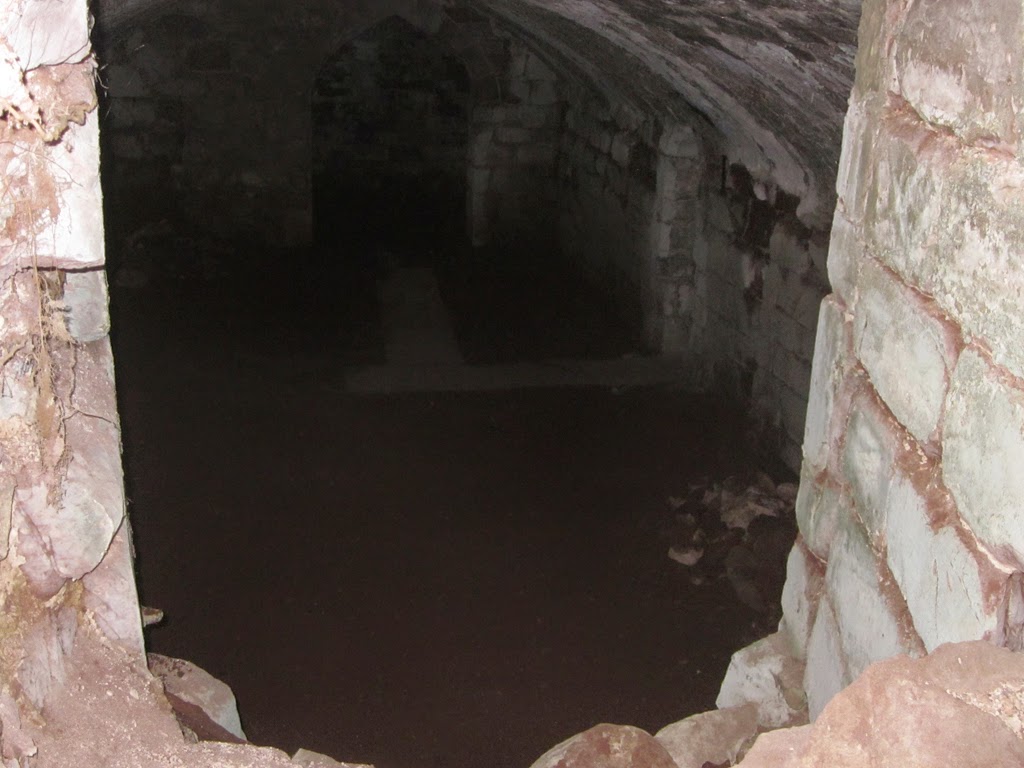 This is the entrance to the new part of the castle which is attached to the old ~
you can see some of it to the far right in this shot. 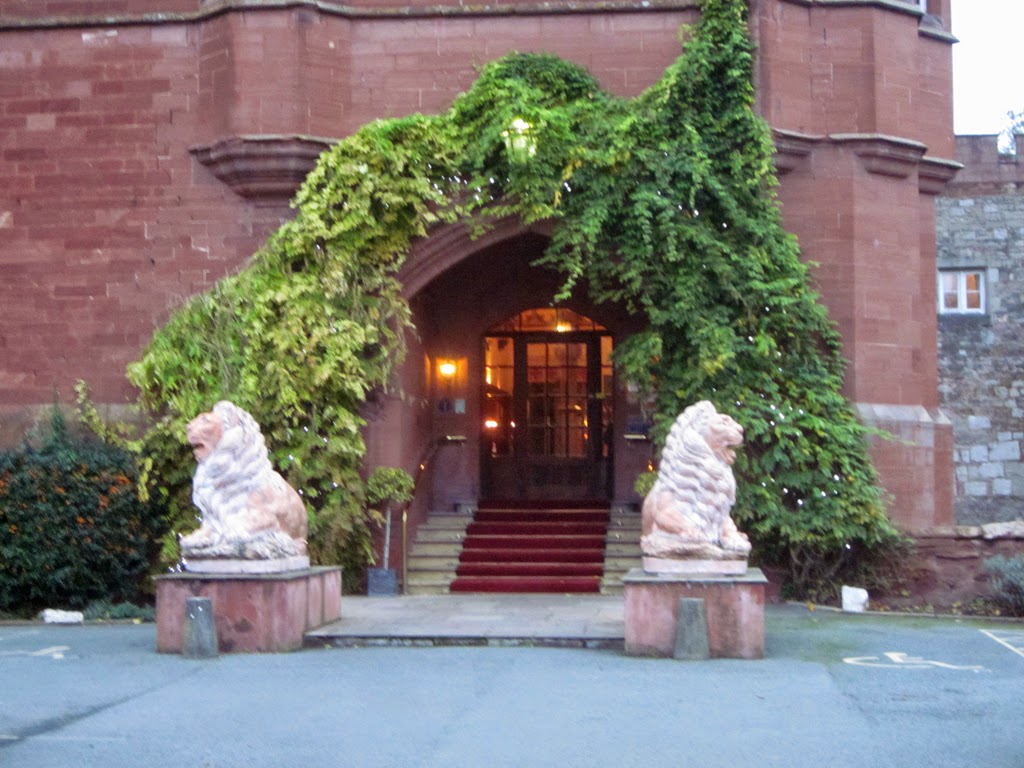 Not too far past those front doors, there was a lobby
where a grand piano sat.  Fraser asked permission and played!
(It was out of tune and didn't have working pedals...but,
he still was able to make music.)
He looks so much like Austin in this shot ~
sometimes it almost takes my breath away. 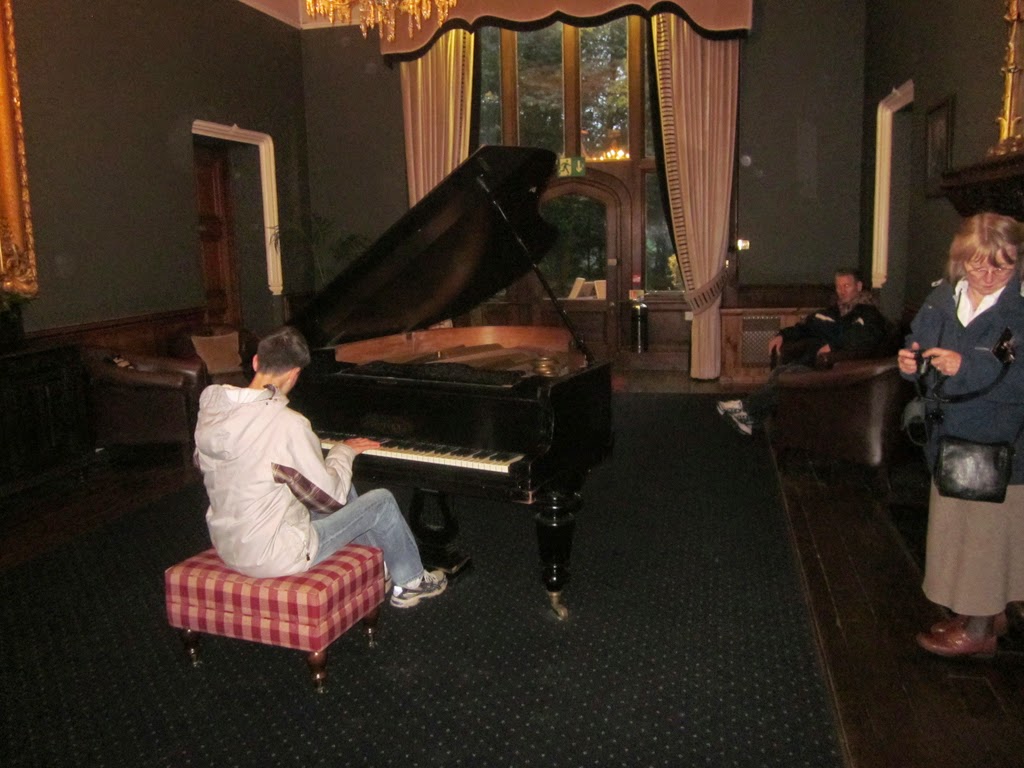 **All photos in this post are from Emma's camera ~
thank you, my little love.  xoxo
Posted by Camille at 2.12.14 Labels: Education, Family, Just for Fun, Photography, Vacation

Oh my friend, I enjoyed this post so much...a bit more of home! :) Your Auntie truly is a sweetie.

I am really enjoying these posts. Please keep sharing!! So glad you all could go. Such happy times. Your aunt is precious!!!

Dear Dianna ~ Yes, she really is! I'm so glad you are enjoying this series of posts. Hugs to you! :)

Dear Nikki ~ You are a sweet blessing to me with your kind words. Thank you for entering into our joys with us. Hugs! :)

Yes, please keep sharing! I am glad you're not done, sweet friend, for I am enjoying each post. Your photos and stories are a delight!

Dear Camille,
I've been following all your posts. How lovely! How wonderful to be able to go and experience all these. I am sure your Aunt Mary enjoyed your company.
Thanks for sharing all of those amazing photos. Your 2 photographers are awesome.:)
Much love,
Sandy

I think it's so sweet that your Auntie thought of activities for you all to do. I'll bet she really enjoyed your visit. Love excursions that include history. Keep those photos coming.
Hugs!!

Oh I love this :) That castle is stunning!! What a fun adventure!

Dear Stephanie ~ So sweet of you to want me to continue...you bless my heart! :)

Dear Sandy ~ I am glad you have been coming along for the ride my sweet friend. Hugs to you and your family from all of us! :)

Dear Maryann ~ So thankful for the opportunity to go and so thankful that our Auntie was glad to have us! (Quite and undertaking, I think!) Thank you for entering into our joy. Hugs to you! :)

Dear Lisa ~ It was amazing to be able to go...thank you for rejoicing with us. Hugs all around. :)