While We Were Gone

I don't know if I've mentioned it here before, but,
our home falls into the *older* category.  At least, here in Canada it does.
We've tweaked and rearranged and updated along the way.
Long ago, I had the bright idea to do our master bedroom in wallpaper.
The wallpaper was put up as well as the curtain rod.  And, that was it.

I hit a brick wall when it came to decorating the space.

Nothing went with that paper.  Nothing.
It was a mistake.  I mostly closed the door on it all.
It stayed like that for ten years.  And, we lived life.
We let it slide.  And chatted about what we would one day do. 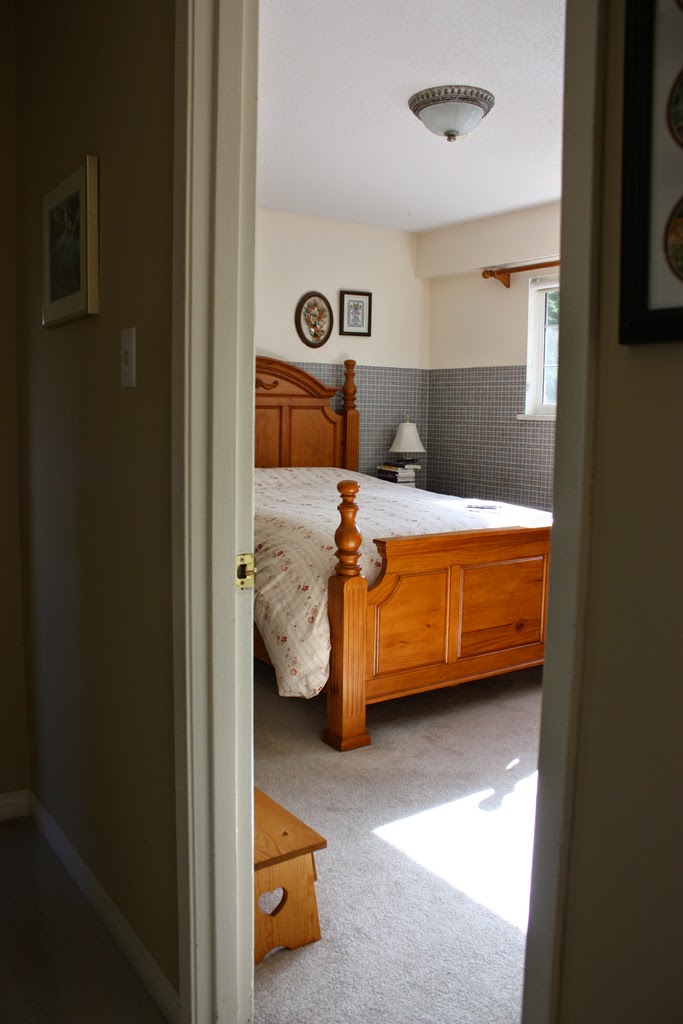 While we were gone, Howie implemented those plans.  Perfectly.
He worked 'round the clock ~ keeping the business going and renovating in the off hours.
He didn't take much time for much else.  I had no idea.

Actually, I had an inkling.  When he asked how to remove wallpaper
and what the codes were for the paint colours before we left.  Those were clues.
However, I had no idea that he would tackle the entire project in one fell swoop.

When our plane landed and we were waiting to be picked up at the airport,
I didn't realise there was a surprise being finalised for us at home.
Calvin arrived driving the van and informed us that
we were under strict orders not to go directly home.
We were banished from the house for a couple of hours.

Another one of those clues.

Howie was madly finishing up.  When we did arrive home,
he opened the door to greet us with caulking all over his jeans and paint on his shirt.
The house smelled very strongly of fresh paint and newly applied caulk.
The walls were still tacky in places and the supplies were still on the bathroom floor.

But, it was done.  And it is beautiful. 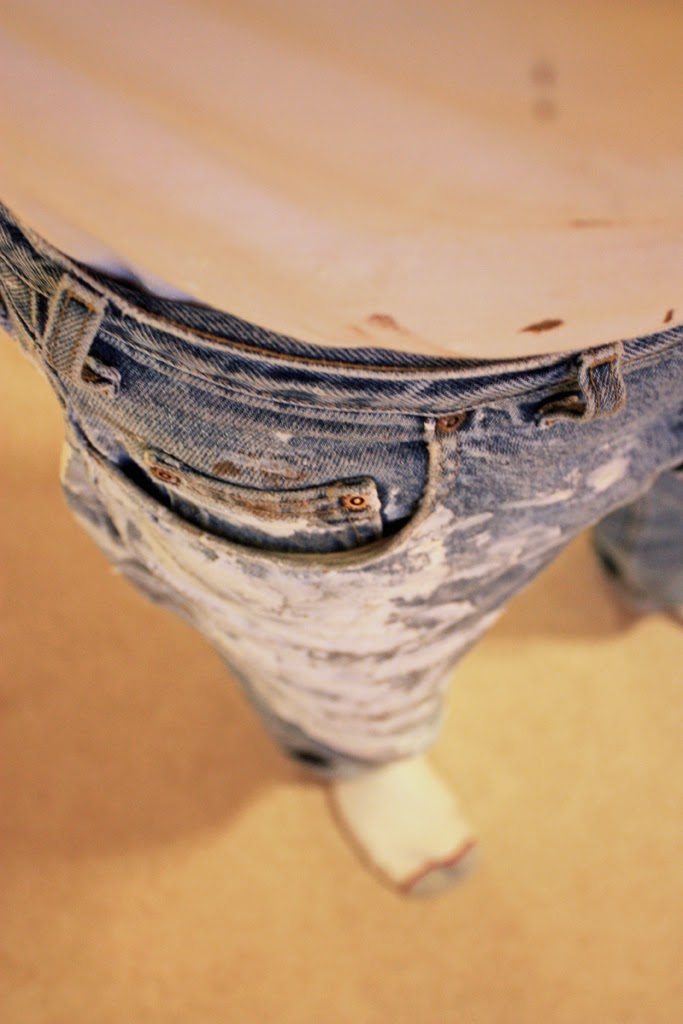 The beginnings of stripping off all that paper.  True love.
Howie used a fabric softener solution which worked beautifully. 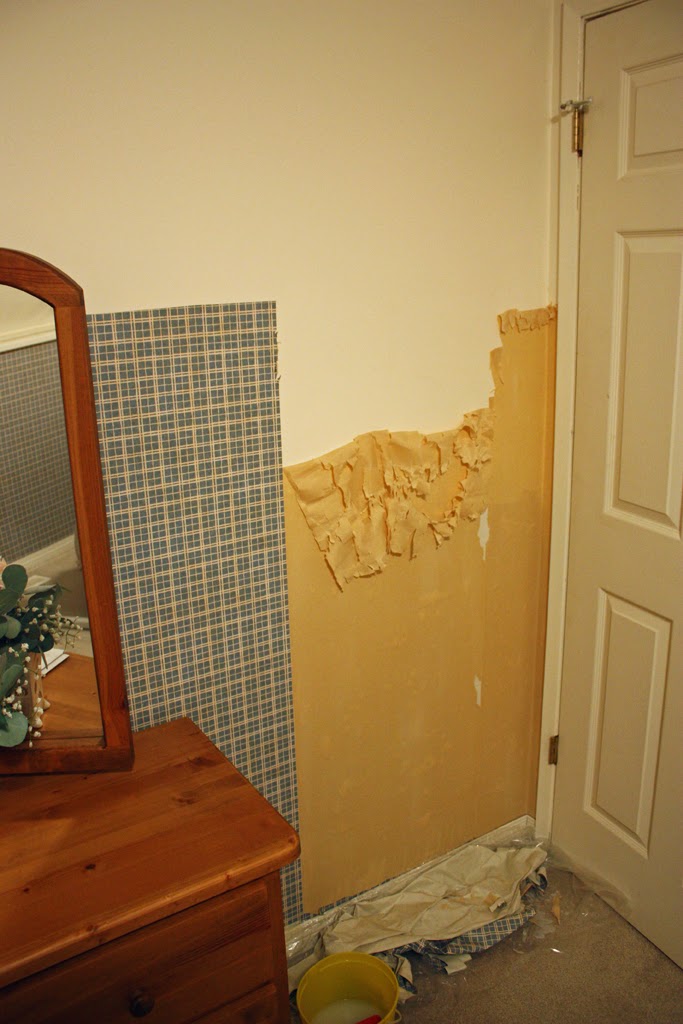 However, it all took time and a mess was made in the process.
A word to the wise ~ think long and hard before installing wallpaper.
In some cases I still believe it is the best thing to do.  In this case, it wasn't.
Live and learn.  Oh, and leave when the job is being tackled!  ;-) 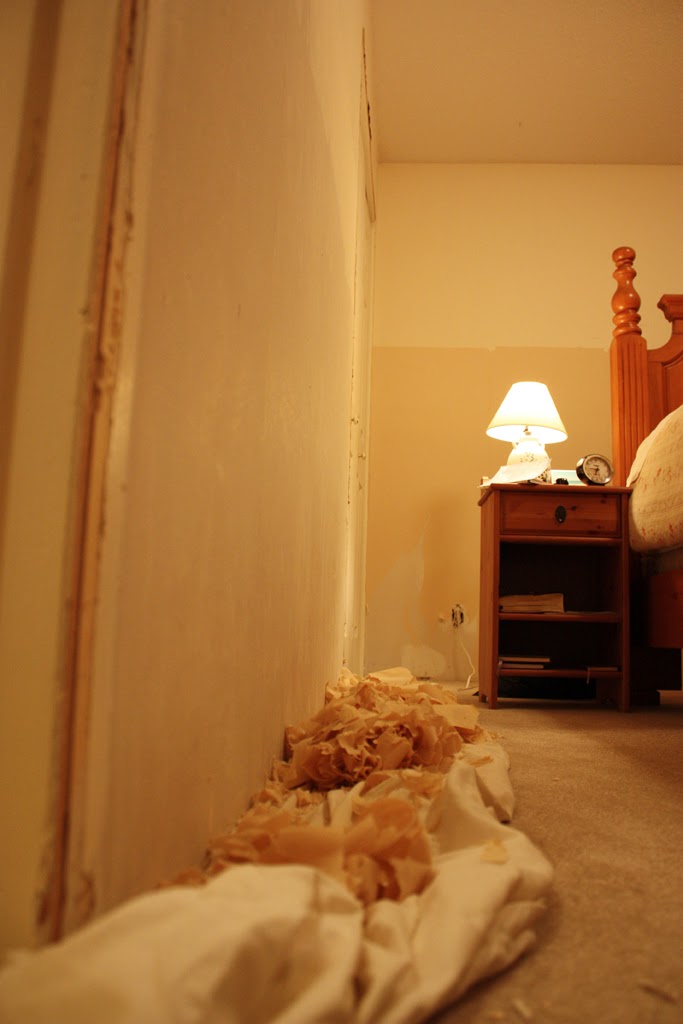 My Sweetheart carefully planned and measured and implemented. 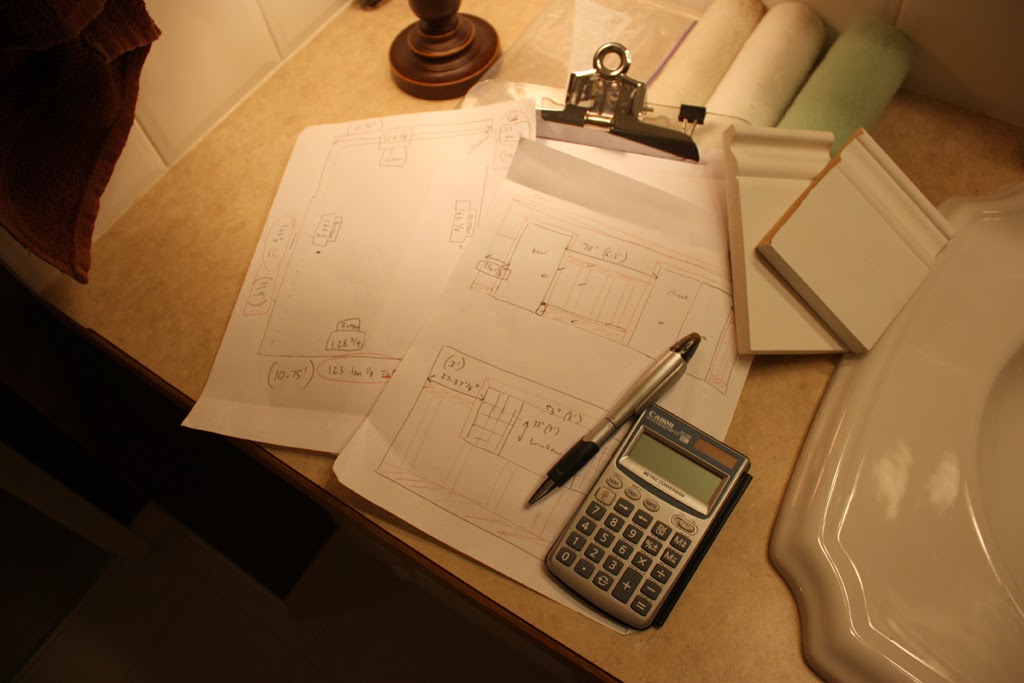 He worked diligently to get it all done while we were gone.
(And, he even took photos to document it all...wasn't that sweet?) 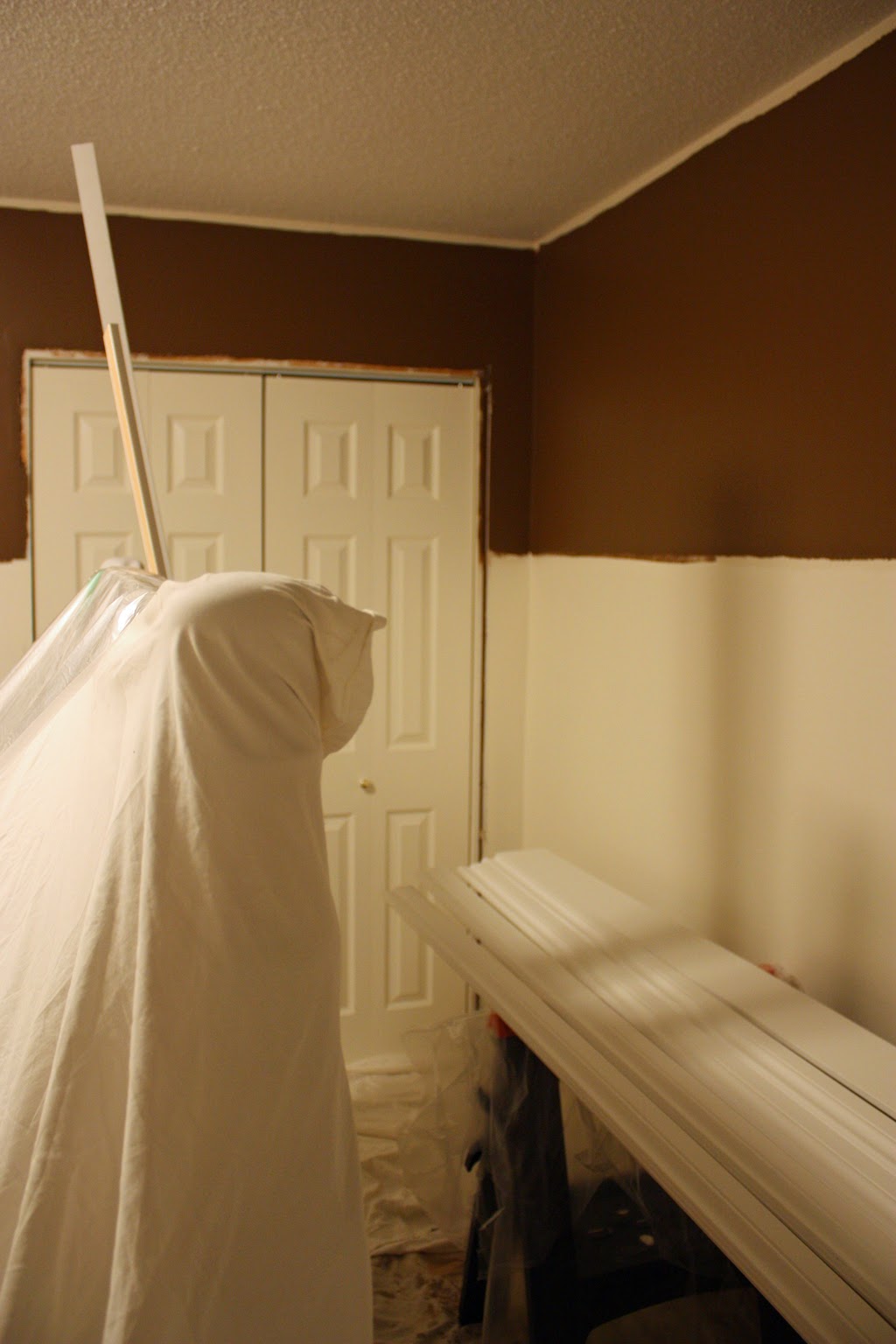 This is how the bathroom looked with all the supplies lined up neatly on the floor
and on the counters.  Apparently, this was his work station.  I'm glad I didn't know. 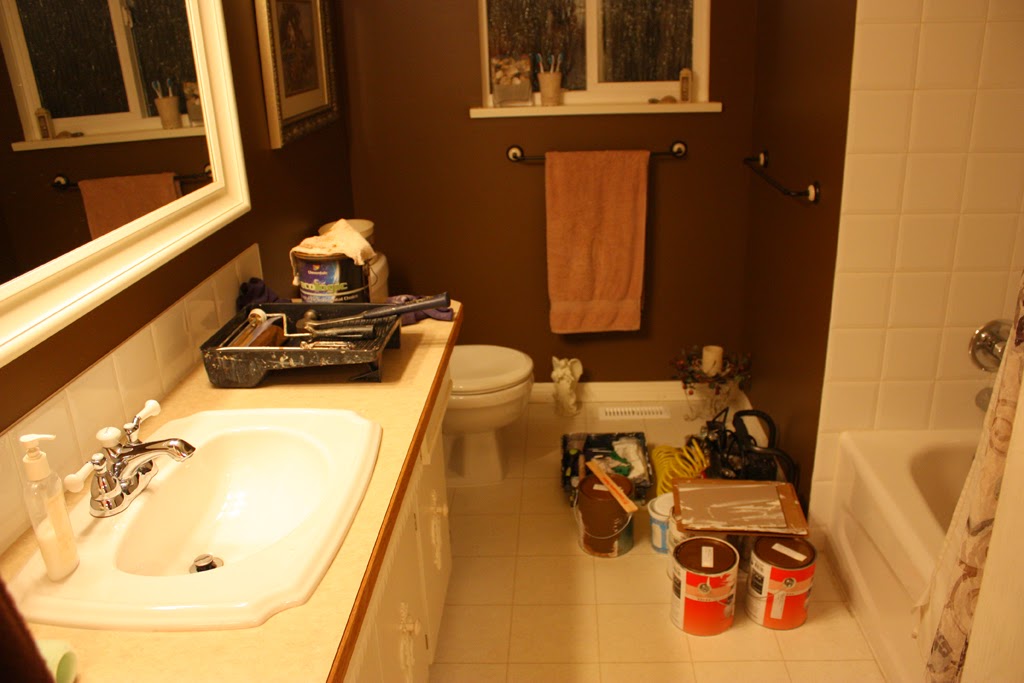 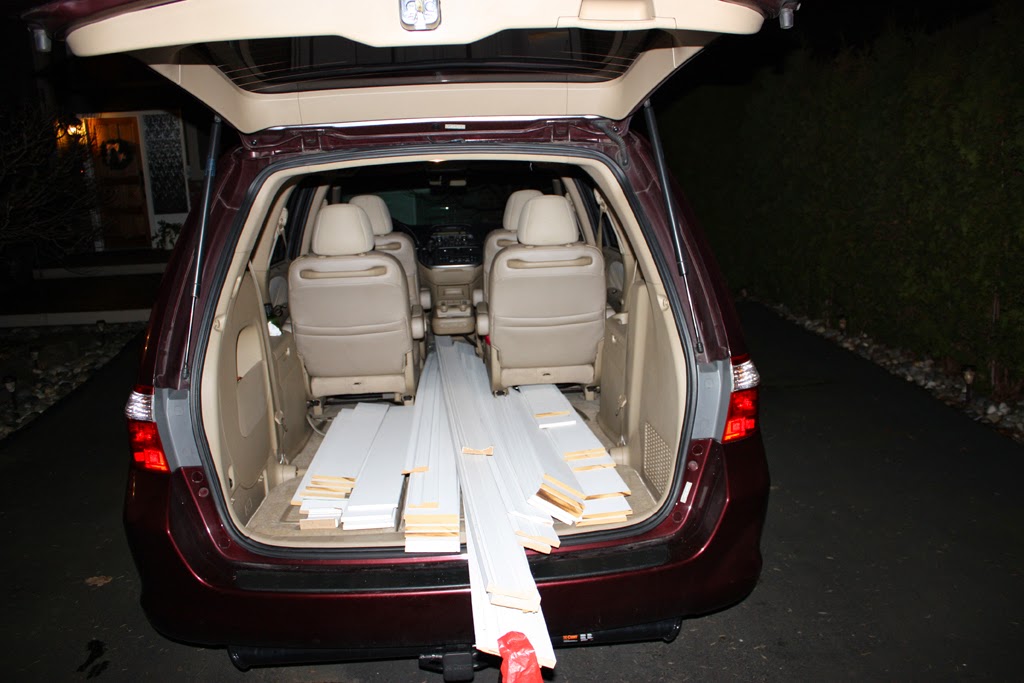 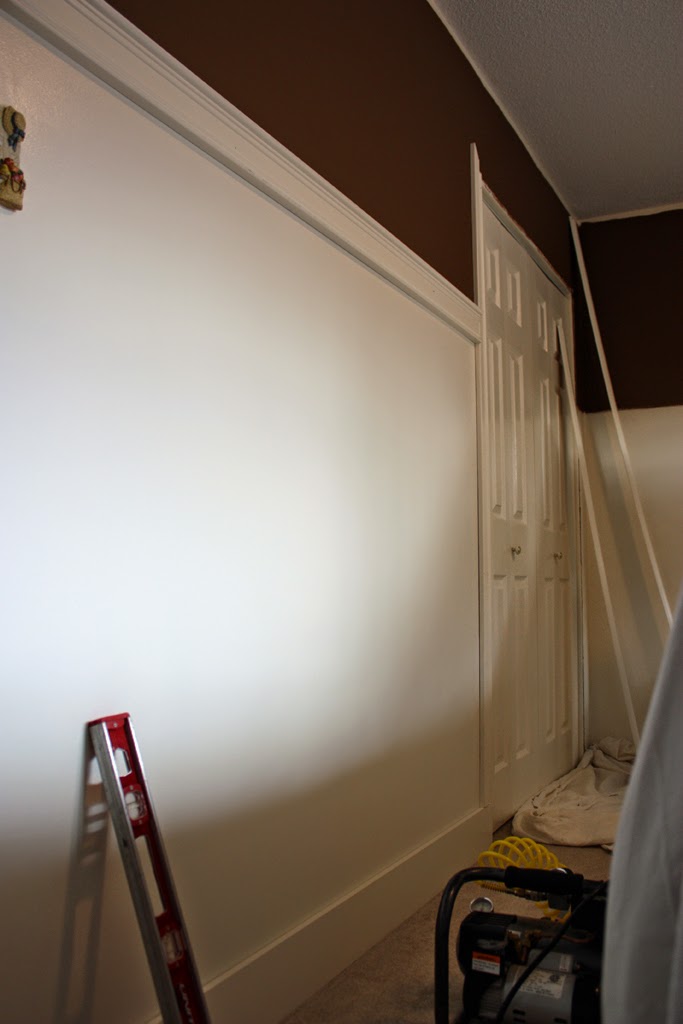 My Dad came by to lend a helping hand ~ thanks so much Dad! 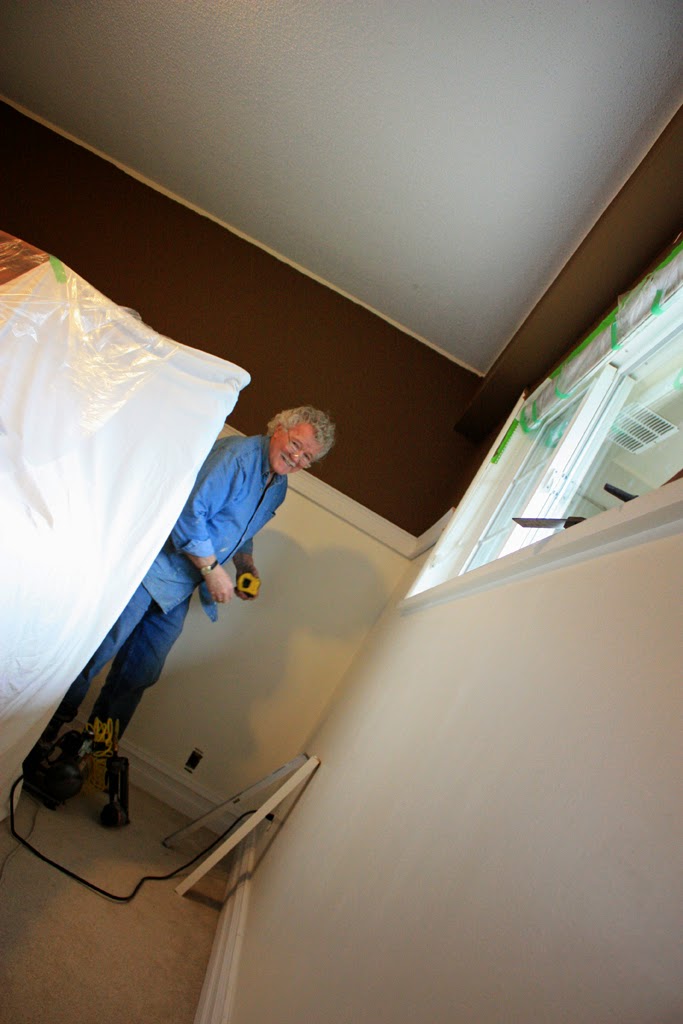 The level was employed.... 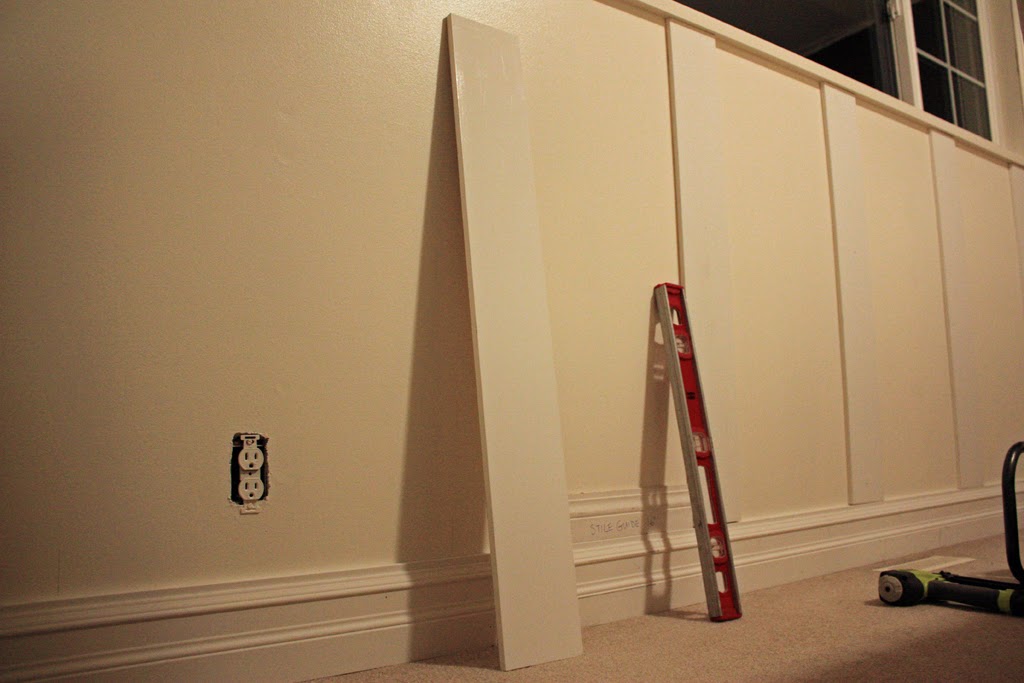 ...as was the caulking gun. 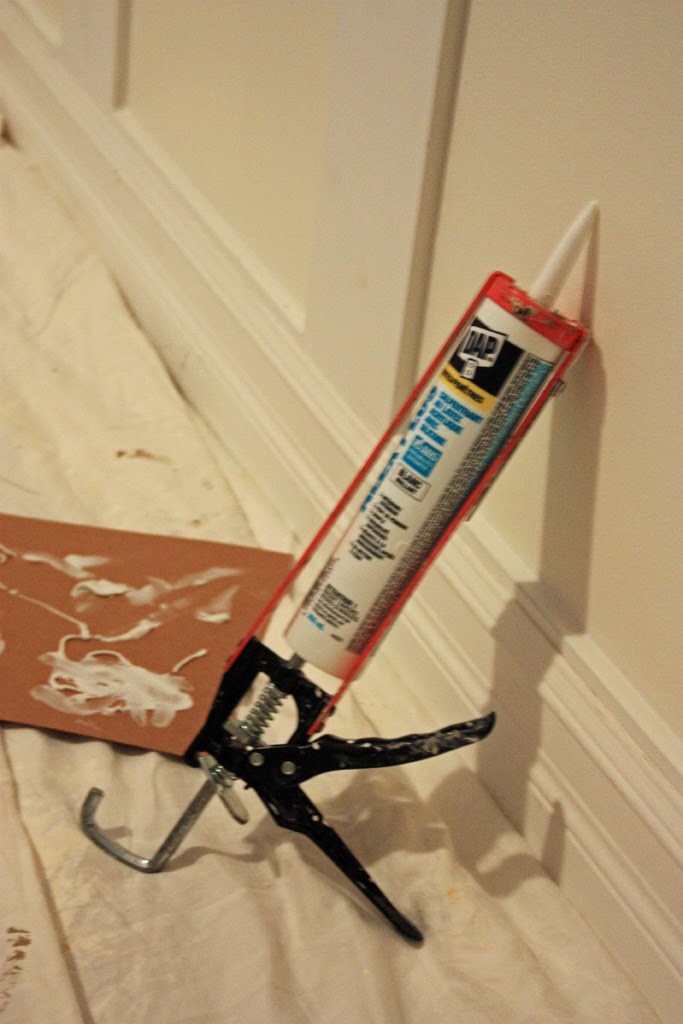 Howie really did work 'round the clock.
The poor neighbours.  :) 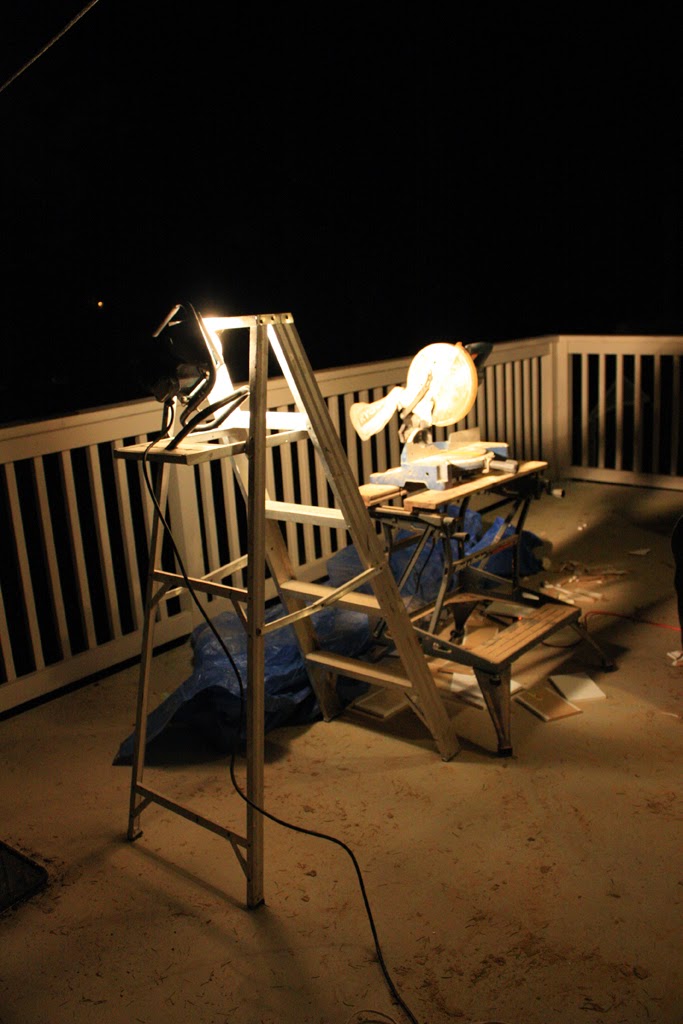 But, he completed the project, and I am so thankful. 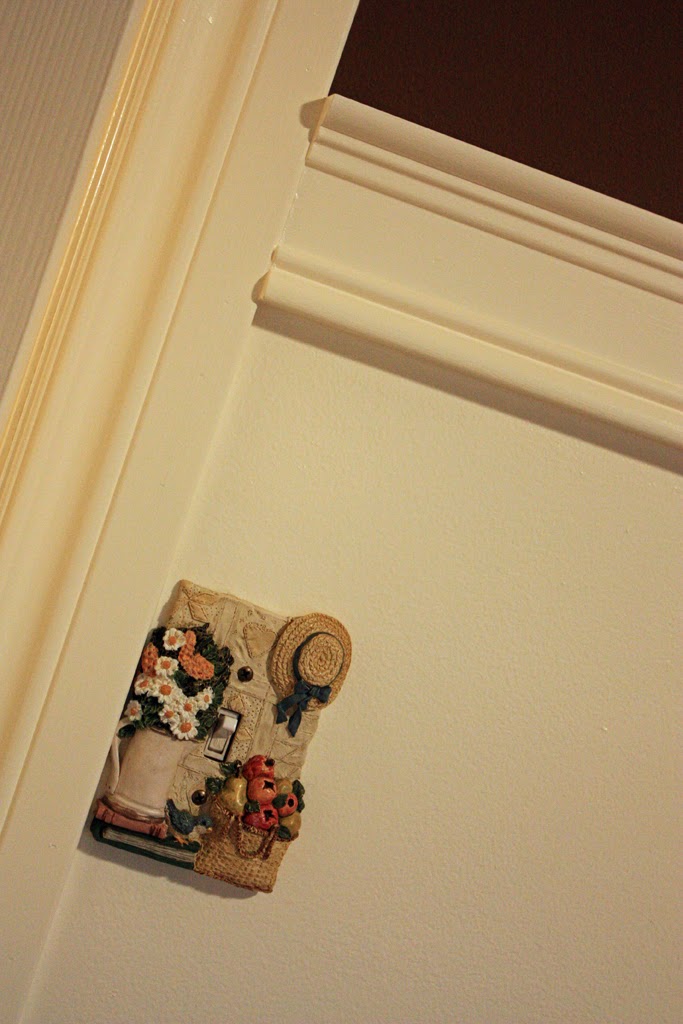 Now, I am busy making curtains and dressing the room ~ finally!
Before and after photos coming soon...I hope.

That was soooo sweet! :)

Oh pretty. Can I get the recipe to remove wallpaper? I have some border that I need to remove. - Trying to make our front bathroom more teenage friendly.

So far it looks just beautiful. I am looking forward to the "before and afters". We had wallpaper like that one a long time ago in our boys' room. I know what you mean about wall paper. I used to love it and always wanted to use it. I don't care to use it any more, because of the reasons you mentioned. It was pretty common to use it way back when we were young, but not so much now. I have noticed that here "Down South", people use wallpaper like we used to, but in the West where we just moved from, it isn't used any more (much). It is a lot of work to remove it isn't it? Your hubby did a great job.

What a sweetie! We just painted our room a few months ago. We had not done a thing with it since we moved in, over 13 years ago. It has made such a difference...I really love it now!

I love decorating magazines and renovation shows and when I see that wallpaper is 'back in' with big, bold prints being the trend I know we are not going there! My father was a wallpaper hanger and painter by trade. He could put up wallpaper with his eyes closed and you never saw a join. Thing is, my mum liked to change the decor often including the wallpaper and guess who had to strip the stuff? Yes, my sister and I spent hours of our childhood with scrapers in hand!
I too have a master bedroom that needs a revamp. The pine furniture is really dated and I would love to paint it. I even have the headboard on the patio waiting for me to begin. I had plans to use Annie Sloan chalk paint but then discovered how much it costs here and it is only available at specialist decorator shops in the big cities! So not sure whether to start sanding. If I do the headboard then I also have to do the tallboy and dresser. So now I'm praying that honey pine comes back into fashion! Can't wait to see the 'reveal' of your room!

What a great surprise from Howie! It looks great. Can't wait to see the final project. How nice of him to take pictures too. My landlord repainted my place in my requested colours and put in laminate hardwood style flooring when I was gone. It was awesome to come home too!

Dear Nikki ~ I thought so, too. I know your men take good care of you as well. :)

Dear Leanna ~ Ah, yes...the recipe! Take one capful of fabric softener and dissolve in 4 cups warm water. Sponge on and leave for at least 5 minutes. Scrape to remove. You remove the coloured paper first and then use this solution on the remaining paper that is stuck to the wall. Depending on the age of the paper, you might have to leave solution on a bit longer. I hope it works for you! :)

Dear k. Angel ~ Yes, truly...hard working men are a blessing! Thank you for your kind words of encouragement. :)

Dear Jennifer Jo ~ The best kind of surprises...for sure! Thank you for entering into my joy. :)

Dear Pam ~ Awww...thank you for your sweet words my friend. Interesting, isn't it how styles can vary from one part of the country to the other?? We are just sprucing up...it's not a big overhaul. But, it feels good to be finally tackling it. :)

Dear Ann ~ Awww...you were ruined for life with all that paper your scraped off as a girl!! LOL! I have a lot of pine furniture and don't plan on switching it out to follow any trends, either. Working with what we have over here. It's fun to dream though...isn't it? :)

Dear Angela ~ What a blessing that your landlord did that for you!! And, even in your colours? How great is that?! :)

Can't wait to see the finished project! What a wonderful surprise.

p.s. - Still waiting on the babies. Soon though!

What a sweet guy, and he took photos too, wow!!!! It looks wonderful. I have one more room that has wallpaper ( a bathroom) and am not looking forward to tackling the job just yet. Going to have to remember the fabric softener trick (BTW was that your newly refinished bathroom...lol) He really did a great job, such a lovely surprise. Blessing to you friend

What a sweetheart! It is coming together very nicely! We have remodeled several homes and I have to confess I do enjoy it! But wallpaper removal has to be my least favorite thing...I'm not sure why anyone uses it, lol. Can't wait to see the final pictures!!
Have a great week!

Dear Patty ~ SO excited for you!! Enjoy those precious gifts as they arrive. :)

Dear Maryann ~ LOL...yes, that's the very same bathroom I just painted. Like I said, I am glad I didn't know what was going on while we were gone. Yes, the fabric softener works wonders. I hope you find it makes your wallpaper removal job easier. :)

Dear Jill ~ Thank you for your kind words. I like some aspects of remodeling...others, not so much. Removing wallpaper would fit into the not-so-much category. :)

Dear Jackie ~ Thank you my friend. You bless my heart. :)

Wow, amazing. Wonderful husband you have there Camille.

Dear Connie ~ I am thankful. Thank you for your kind words. Hugs to you! :) Love, Camille

I was feeling a bit blue so I thought I would visit you. Thanx for cheering me up! I look forward to seeing the finished product.

God Bless you all,
Love you sister in love :)

Dear Laura ~ So sorry you were feeling *blue* and so happy that visiting here cheers you up! You bless my heart. Love you MUCH! XO