We have THREE boys.
They all play hockey.
It's a Canadian tradition.

We are so thankful that it is
a Christian League they play in.
There is so much less pressure
in this league than boys experience in the minors.

We are not raising the next
Gretzky, Crosby, or Ovechkin.
Not even close!

What a blessing that our boys are
able to play hockey for FUN ~
the way the game should be played. :) 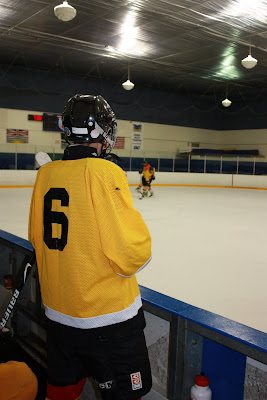 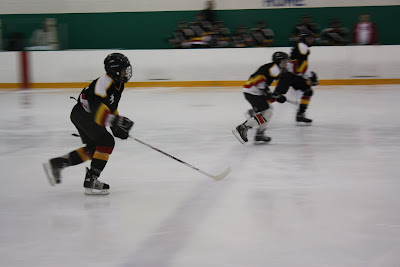 Calvin (far left) and Fraser (centre) flying up the ice. 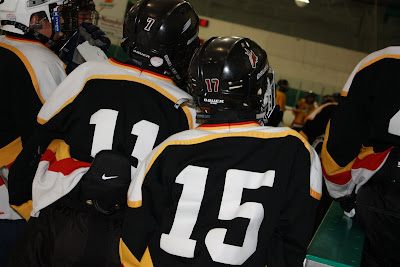 Calvin (#11) and Fraser (#15) are on the same team this year.
We were supposed to have three teams going,
but that would not logistically work with one vehicle and
scheduling...the league gave special permission for Fraser to
move up a year early.

The following three photos are of Fraser... 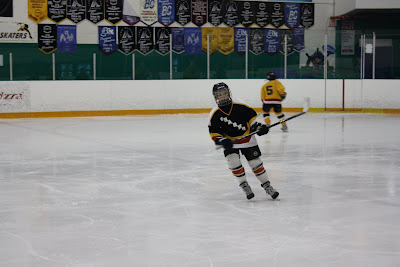 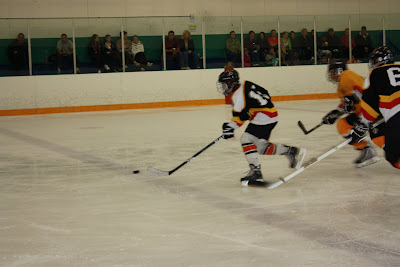 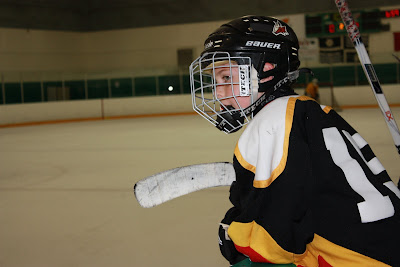 Calvin is in the next three... 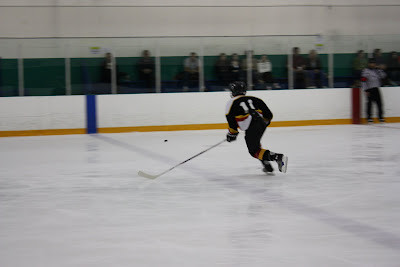 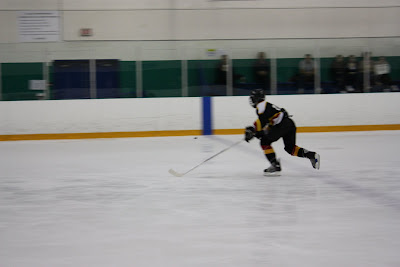 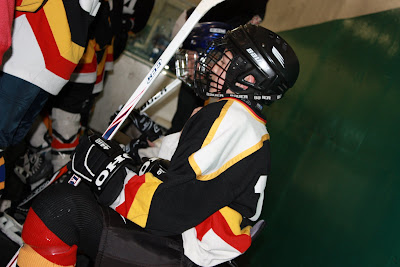 Austin was at a practice on the night I was
taking these photos...hence the near-empty ice.
Here he is working at his game. 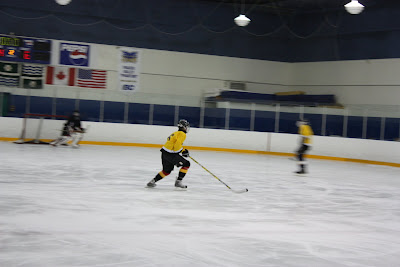 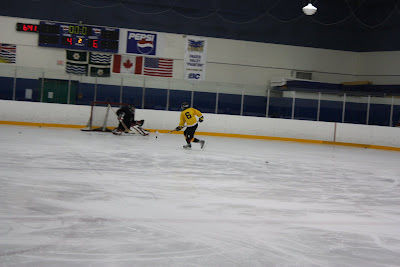 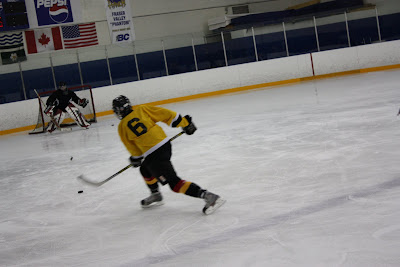 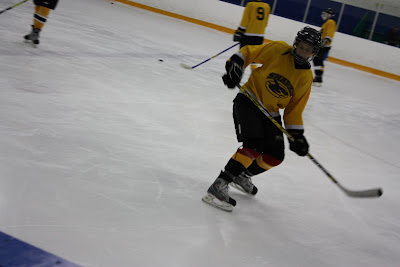 Thankful this Monday for the opportunities our boys
have been given since joining this league.
Continuing to number and count and practice thanks.

879. Kind coaching staff who encourage the boys to enjoy the game

880. Friendships that develop amongst the boys

882. Offer of car-pool help on occasion when the ice times clash

883. Grandparents that have come out to cheer the boys on

884. Daddy could coach each of the boys at some point over
their time in this league

885. Opportunities to learn to referee ~ for Austin and Howie

888. Passing gear down from one boy to the next

889. Ability to trade in gear that is too small for all three

892. SLR camera that can capture some action shots without too much blur

893. A Dad who teaches the boys to shower before they come home!

894. The special permission we received for Fraser to
join Calvin's team this year

897. Heaters in the bleachers

898. The thank yous from the boys when I take them without Dad

899. Thankful for the protection the gear offers
and that the boys must wear cages ~
a good thing when braces are involved

900. Thankful too that there have been no major injuries to date
Posted by Camille at 18.10.10 Labels: Austin, Calvin, Fraser, Thankfulness Journal

I love it! Active, healthy, sweaty boys and all the gear that they require. Such a holy privilege to raise them. As a mama of four boys, I share your delight.

Thank you most kindly for your visit.

Hi Friend! Oh that you can find so many things to be thankful for about HOCKEY! This sooooooo put a smile on my face because I cannot relate in the least about the sport, but the joy is all the same. You are such a loving mama that you can go on and on about the wonderful blessings of your boys and their sport. Just sweet, that's what it is! LOVED this list in its entirety!

Love to you, friend!
Tami

Ah yes, Rhonda...sweaty boys! I do *know* of what you speak! LOL! You are right...it is a privilege to raise them up for HIM! Thank you for your visit today...lovely to hear from you. :)

You are soooo sweet to enter into this post Tami as you are not in the least interested in HOCKEY! LOL...that was too funny. :) I never intended to become a "hockey Mum"...but it was "forced" upon me. Not really "forced", but I do think I protested a little. ;-)

Blessings to you both!
In Him,
Camille

Hello Camille,
How much fun are you having!!!
Enjoy these days my friend...
Boys are so much fun to raise.

I love how thankful you are and how you post about all the simple pleasures the Lord showers on you..

Love the action photos.. I know the boys love that you take pictures. That is the first thing our Austin looks for "the camera".
Did mom get that tackle.. ( For our family football...)

Have a wonderful and blessed week,
♥ Virginia

How wonderful that there is a Christian league! My son's ice skating teacher has suggested that my son should take up ice hockey and there is a league in the city. He really is a super fast skater and we did offer to take him to give it a go but it would mean an extra evening out so I was not too worried when he said he wasn't that interested. He continues to attend the figure skating classes (does not like admitting that he passed the ballet badge though!) which are great for our family - all age integrated classes, I love it that all my children can do the same sport on the same day. You ought to see my twins now after two years of lessons having started at just 3 years old! Of course skating and ice hockey are very low profile sports here but should we ever have the chance to visit Canada one day I will be able to send them all out onto the ice without a worry! I also appreciate visiting the ice rink during summer in Australia - what a relief to get out of the heat!

Wonderful blessings Camille...thank you for sharing!

Great shots! You must be so proud ;)
Love the Christian league! My husband played in one for years while I sat with a cold bottom :)

I agree, it's a blessing to have Christian leagues for our kids to play in. When we lived in California we were involved in a Christian basketball league and it was one of the best experiences we had with sports.
Seeing your boys play hockey brings me back to the couple years I lived in Minnesota in my younger years. Hockey was big there too.
I hope all is well with you and your family Camille. :)

OH Camille! I LOVE the photos of the boys playing hockey. I have been to a hockey game once as a child. It's so fascinating to me that that's just a regular part of your lives - hockey practice. Here it's football...I am thankful for a glance! Have a wonderful week!

Football is so foreign to me Virginia...but raising boys, now that is something I'm familiar with! LOL! How wonderful that you take photos of your Austin and that he enjoys that! Thank you for visiting and for all your encouraging words. :)

Isn't it interesting that different areas of the world have "their" sports Ann? I think it's wonderful that your children enjoy ice skating...maybe you WILL visit Canada one day. I agree with you, another evening out is not always a positive thing. In our league the commitment is less than in the minors...such a blessing! :)

Thank you Nadine...it's lovely to hear from you! Have a wonderful day! :)

LOL Heather...YES! Someone who understands!! ;-) We are spoiled 'cuz there is even a heated viewing area upstairs above the rinks...such a luxury! Will your boy play hockey one day, do you think?

How wonderful to have Christian leagues to be a part of Christa! I had no idea there was a basketball one...how great is that? I trust you are all well in your family too...keep me posted! :)

Thanks for your sweet words Jenn...and for the photo encouragement. :) I find it very fascinating that hockey is NOT part of every family's life! LOL! Football I know nothing of!! Will your boy play it do you think??

May the LORD bless each of you this week my friends!

In His Love,
Camille

That is a blessing that they get to play for all the right reasons!

What a wonderful blessing to have your boys in a good Christian league. They are few and far between, but I am sure a wonderful experience when you find them!

Oh yes Jackie, we are so thankful that there is no pressure and they can just have fun!! God is so good to us, isn't HE? :)

And my other friend Jackie...funny that you both commented back to back here. :) We were so happy to have discovered this league...I don't think we would have entered the hockey world if it wasn't available ~ too large of a commitment and Sunday games, etc...

Thank you both for stopping by!
Blessings to you!
In His Love,
Camille

Another set of wonderful blessings to be thankful for. Thanks for sharing.

Thanks Jenn...we all have many things to be thankful for, don't we? The LORD is the BEST reason of all! :)