As the saying goes ~ "There are many ways to skin a cat".
It's true for almost anything in life ~ post-secondary education included.
We've had questions posed to us about how we will navigate
the university years.  And now, they are upon us.

We are venturing beyond the shores of high school with Calvin.

Austin graduated to heaven in the same year he was to graduate from high school.
We had no idea that he would not need a post-secondary education.
We had no idea that his life here was ticking down in days rather than years.
But, the Lord knew.  It was not a surprise to Him.  Not in the least.
And, His ways are always best.  Though we may not always understand.

We rest and we trust.  We must.
The Lord is faithful to bestow great and abundant grace.

Since we were expecting Austin to go on for further education,
plans had been made.  A course of action had been set.
He was hoping to become an architect.  In order to facilitate his aspirations,
an undergraduate degree was required first off.

We knew where he wanted to end up,
so, we worked it backwards and planned out a course of action.

A number of universities were researched by my Sweetie,
and, one emerged as the best option for our boy.
So, contact was made two years in advance,
and communication between Howie and Austin
and the admissions department began. 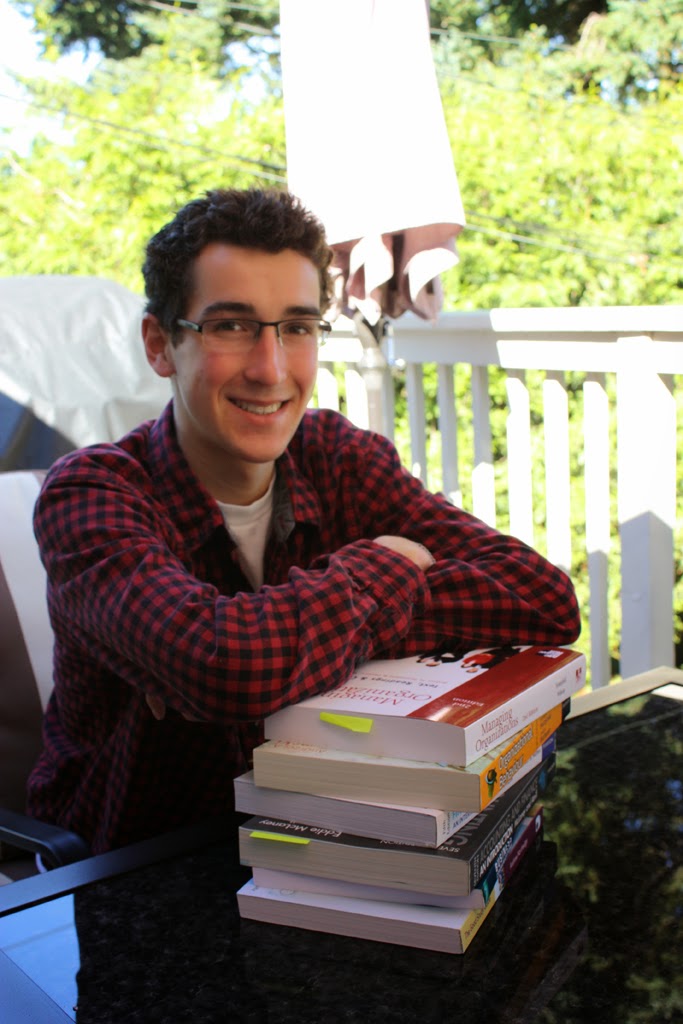 ~ Calvin with his first year books ~

The university was approached with an inquiry into their
requirements for admission into the desired program of study.
Once we knew what those requirements were,
we were able to begin meeting them.

Moral of the story?  It's not as elusive as it may seem.
Determine where you want to end up, and find out how to get there.
It certainly simplifies things when this pro-active approach is taken.
It eliminates waste and takes the mystery out of things.

Due to the ground work already laid for Austin,
the process was relatively stream-lined and straightforward for Calvin.
The school already was aware of our family and our course of action
had been fully disclosed.  They were very accommodating and helpful.

Communication, it seems, is key.

So, navigating the high school years and beyond doesn't
have to be a daunting task.  Just simply set your goals
and discover the ways in which you may achieve them.
It's as simple as that.  Really, it is.  Mostly.  :)

So hard to believe that Calvin has already reached this point in his studies. I love the picture you've shared of him here in this post. Thanks for sharing how all of the ground work your husband had worked through with Austin actually just made everything so much more straightforward for Calvin's entering.

Camille, I so enjoyed reading about your son and this next chapter of his life. God sure had His hand in all this it would appear.
He takes care of His own, doesn't He?
Sweet blessings to you and your family.
Much love, Debbie

Dear Dianna ~ It was such a blessing that much of the groundwork had been laid for Calvin. We weren't able to think clearly for quite awhile after Austin went home to heaven. Thank you for your sweet words of encouragement. :)

Dear Debbie ~ How precious it is to belong to Him! Yes, He is certainly orchestrating all the details of life. What a blessing! Hugs to you. :)

What a great photo of Calvin! Will he be attending college or doing his degree via distance ed? We now have a second child taking advantage of the Open University programme we have in Australia as our farm girl has recently commenced her first unit towards a criminology degree. She's still doing her agricultural studies (on farm education where the tutors come to you!) and went on a study tour the other week visiting dairy farms around the State. A literal 'field trip'!
It's so interesting to see what the Lord leads them into and its certainly diverse in this home but you certainly see how God orchestrates everything, bringing an ex-dairy farming family to live next door to a dairy farm which provided employment for our older children and the income to allow them to pay for their studies! Our son's degree helped him secure an excellent role as a software designer and it just so happens that his company produces software programs for farmers! It's so exciting to see all the pieces fall into place and I don't think they would be where they are today if we had chosen a conventional pathway for education. I do hope Calvin will still find time to do his photography. His photos are amazing!

Dear Ann ~ Isn't it interesting to see how the Lord leads our children? It's so encouraging to know that the doors He means for them to go through will open according to His will. What a blessing! Calvin's program is offered both on campus and distance...it's the same whether he is there or not. Soooo, he might venture out at some point, but, for the time being, he is working from home on it. :) Thank you for your kind encouragement about his photography...yes, he is keeping it up.