I am a planner.  I like to have things all sorted out.
(As proven by posts like this and this.)
Events lined up on the calendar.  Neat and tidy.  Predictable.
But, then!  Sometimes I like things to be wild and crazy.
Just sometimes.  Just a little.
Not so long ago, we embraced the wildness.

Over six years ago, our precious Uncle was dying.
He wanted to die at home, and it was my privilege to
go and help in his last days.  In Wales.  For two weeks.  By myself.
It was an incredible blessing to have been part of it all.

During my stay, our Auntie hatched the plan to have us come for a visit.
She was serious about it and excited at the prospect.
She shared with me in the happiest of ways that she had
figured out how to house the six of us in her teeny tiny home.
(Everything's smaller in the United Kingdom.)

We thought it was a great idea, too. 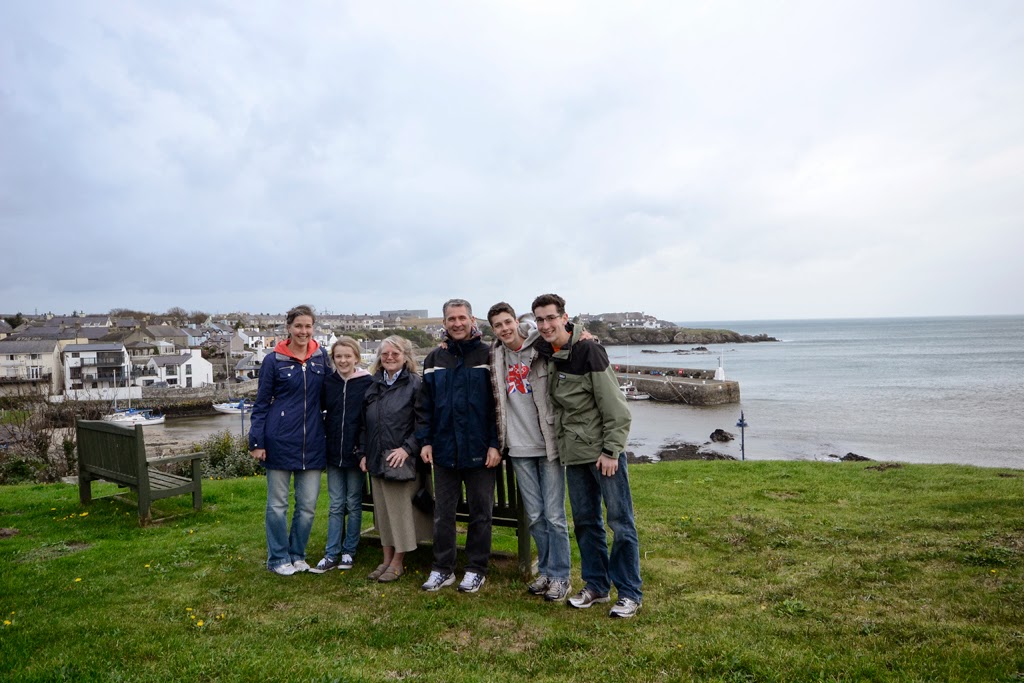 ~ All of us with our precious Auntie in Wales ~

So, we saved and planned (see?  told you) but, life happened.
Our Austin got sick and then he got sicker.
We couldn't see our way clear to go on any of the dates
we had chosen.  Our savings all got used up.
The plan got shelved.

But, the dream didn't go away.

Over the years, Howie and I would send each other emails
containing deals we had come across for flights to London.
We continued to dream.  No firm plans were in place.
This past October was no different from the norm.  Not especially.
Except for the fact that another deal came across my desk.

This one seemed too good to pass up.

Our friend's Mom was still willing to have us stay with her
for the London portion of our trip ~ as long as it was while she was there.
Which happened to be only for another two weeks ~
her plan was to leave for six months at the end of October.
That was that.  Impossible.  Or, so I thought.

But, then another overwhelming thought crowded in ~ Why Not?
Why couldn't we just pick up and go?

Our Aunt was willing to have us anytime.  No issue there.
Howie was able to get away from work.  School could be flexible.
The timing actually couldn't have been any better.
So, the plan was made suddenly and without any warning.
We booked our flights on a Tuesday and flew out on the one that followed.

~ Inside our Auntie's cosy home ~

With accommodations all covered, and access to kitchens
at both locations, we were set!  (It's necessary to have a kitchen, right?)
Our Aunt was thrilled that we were coming ~ she's sweet that way.
She also is incredibly accommodating and hospitable.
We were thrilled to have been able to go.

We planned the trip, went, and were back home
before it even registered what was actually transpiring.
It was like ~ What just happened?!

So, that proves it ~ we are a little bit crazy.
And, incredibly thankful.
More photos to follow...soon.  :)

**Photos in this post courtesy of our Calvin ~
Thank you my love.  XO
Posted by Camille at 24.11.14 Labels: Family, Just for Fun, Vacation

What an amazing adventure. So glad you got to go. Can't wait to see more pictures!!!

Some little birdies around here told me you were all in Wales... they found out before I did. 'Really?' I said 'I didn't know Camille was planning a trip to the UK'! Looking forward to seeing all the photos which another birdie tells me are amazing! Yes, everything seems smaller in the UK. I felt the walls were closing in on me when I returned home. I had become so used to a bigger house and the washing machine in the kitchen seemed strange even though I grew up with that! Our back kitchen where we ate our meals was so small that when someone needed milk from the fridge I had to stand up and push my chair under the table in order to open the door! Got the short straw there! Living not too far away from Wales as a child, our annual family holiday was almost always spent in North Wales. You will have to let me know the places you visited. I have been to Wales a lot! Would love to take my family home one day and visit all the places I knew as a child and young person.

Aww...look at you! What a wonderful trip and one you will never forget.
I'm like you, Camille, organized and find it difficult when things change in a hurry.
Since my inner ear/balance disorder I have changed some, for the good. Spur of the moment things happen and sometimes you have to go with it.
Your family is beautiful.
Sweet blessings to you and your family for Thanksgiving.
Much love, Debbie

So glad everything fell into place so you could go.God is so good to us like that. ;) He often gives us the desires of our hearts. It sounds like you had a good time and I am glad you just went. Can't wait for the pictures!!

Dear Anonymous ~ It was such a blessing. Thank you for stopping by. :)

Dear Esther ~ Thank you for entering into our joy with us my friend...you bless my heart. :)

Dear Ann ~ It was a big surprise to me, too. Thank you for stopping by for a visit with me here my friend. Hugs to you! :)

Dear Debbie ~ Your words are sweet ...thank you my friend. May the Lord bless you this Thanksgiving and always. Hugs. :)

Dear Nikki ~ How kind your words are...thank you for entering into our joy with us. Yes, truly the Lord is so very good to us, isn't He? He is gracious in giving to us those things we do not deserve. Hugs to you! :)