Austin's clothes remained in his drawers and closet for nearly two years.
We didn't have the heart to deal with his room, so it remained vacant
with his things nearly as he'd left them.
It was too difficult for us to sort through, so we waited.

Items that would be useful to his brothers were pulled out,
but, the rest stayed put.  The occasional piece made its
way back into the mix of wearing and laundry and life.

But, some of the more sentimental pieces remained untouched.
A little over a year ago, we moved Calvin into his room.

Austin's things were stored away to be sifted through at a later date.
His clothes were packaged up into a bag and set on a shelf.
His collections, books, keepsakes and violin occupied another shelf.
I don't know when we will sort through everything.  One step at a time.

Almost three years to the day after his home-going to heaven,
I pulled the bag of clothes off the shelf and opened it up.

I am not sure where the idea came from, but,
it seems to me that it was another grieving mother who shared
what she had done with her child's clothing.
A raggy quilt had been made with the items.  What a wonderful idea! 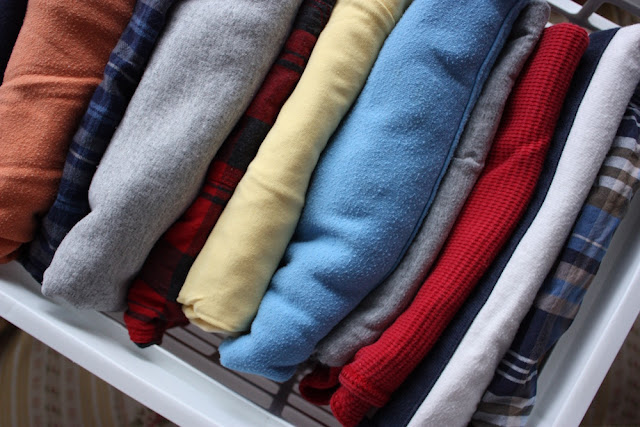 So, that's what I am planning to do with some of Austin's clothes.
I love it that it will be functional and in the mix of everyday life.

Ready to be put to use or simply to view at any moment.  In any season.
After all, isn't that what keepsakes are for?
To be looked at and used and enjoyed?  Otherwise, they just gather dust.
I don't want Austin's things to languish on a shelf or sit tucked away in a box.

We are thankful to have these reminders of our Austin.
Each item of clothing that will be incorporated into this quilt is special.

It's a comfort to be reminded of our young man.
We speak of him often and smile as we remember.
Sometimes there are tears ~ at other times, there is laughter.
It's all part of the process of living here without him.

I'm so thankful for that long-ago inspiration to make something
from the clothes he left behind.  It will be a treasure.

I was recently going through clothes I had of my mom's. It was time to let the sweaters and coat go. It was fall. I saved a bathrobe that has seen better days. Megan and I decided to make it into a bag or blanket as that's what mom would do. She was always making tote bags. Usable and memorable. It's good to do something useful of Austin's clothes. Oh the memories you have with you my friend. Hugs and prayers and Merry Christmas to all of you! God bless you!

That's a wonderful way to keep him alive in your home. I think that's a neat thing. I have a neighbor who lost a son this year and his wife made her pillows from his shirts. I thought that was really special. I hope you enjoy your quilt. I'm sure you will think of wonderful memories as you see each stich.

Becky ~ What a lovely idea. May the Lord continue to comfort you as you miss you Mom. May you know His hand of peace upon you all at this Christmas time and always. Big Hugs. :)

Chelle ~ What a sweet thing to do. I am sure your neighbour will treasure those pillows. Merry Christmas to you and your family. Hugs! :)

I think that is a wonderful idea Camille! You and your family have been in my prayers a lot lately. I have many friends who have lost children for one reason or another...all at different ages and stages of life. It burdens my heart terribly. So as I begin praying for one friend (who's son in his twenties took his own life not too long ago) then the Lord brings to mind each dear friend who has lost a child and the prayers spill forth. I can only imagine your pain and praise God at the beautiful way you handle that pain. His grace is amazing and the comfort He has wrapped you in is a truly wonderful thing to see. Your Hope and continued praise to Him is a beautiful testimony!!! Thank you for being *you* and letting His light shine through you! :) xoxo

Katy ~ What a sweetie you are!! Thank you so much for thinking of us when you are praying for your friends who have buried children. What a wonderful blessing it is to belong to the family of our Great God. Thank you for your kind words and sweet encouragement...you bless my heart. May the Lord bless you as you follow Him into the coming year. With Love, Camille