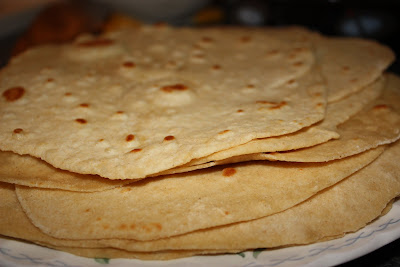 I have always used store-bought flour tortillas.
I had no idea that they were so easy to make!

We were having refried beans for dinner and I decided to serve them with
Jennifer Jo's recipe for homemade tortillas.
I ventured into the unknown and made them and they were a hit!
I made a double batch and had NO leftovers ~
not actually surprising around here!
Next time you go Mexican, try these...you won't be disappointed.
I followed the recipe to a "T" and they worked ~
do I sound surprised?  I was.

One thing to note ~ I do not have a comal or a cast iron skillet...
I used the electric frying pan I own (which is stainless with no non-stick coating)
and they still worked.  I just greased the pan for each tortilla with coconut oil.

Next time I will have to multiply the recipe by four to have leftovers. :)
Posted by Camille at 21.4.10 Labels: Recipes ~ Breads/Cereals

Hi Camille,
the tortillas look and sound delicious! I went to her blog and she's pretty funny don't you think?
We have been looking for a good tortilla recipe so we'll try this one. Thank you for sharing this.

Thanks for sharing this. I dropped over and got the recipe. Have a great night.

Those look pretty simple to make. I have never made them before either. I think that I am going to give them a try - I am sure they are much healthier than the store bought ones!

I'm so, so glad you liked them!

These look great! We love Mexican foods.
Have a great week.

Thanks, Camille, for sharing the link to Jennifer Jo's recipe! I will try them the next time we have Mexican! You make it sound SO EASY even I could do it! ;~}
Blessings!

Easy Peasy, right? I have made my own for a few weeks now! Love them! And...I know exactly what is in them!

Hi Camille~ Oh yes homemade flour tortillas are the best!! And you're right soooo easy! Well once you learn how anyway (it took me a long time to learn)

I have our recipe on our blog. We make a huge batch and gobble them all up. So thick and warm!!

And we pressure cook our beans and those are a perfect match with our tortillas.

Nadine ~ I agree...homemade is always better. I had never thought to make my own before, but now I don't think my family will let me get away with giving them store bought from now on! :)

Jennifer Jo ~ We did! AND thanks again for sharing your fabulous recipes! :)

American Home ~ Oh do try them...they really are easy to do and yummy! :)

Raeann ~ They ARE easy and yes, you CAN do it! Just follow Jennifer Jo's excellent instructions and I am sure you will have success! :)

Cindy ~ How fun that you just discovered this too! I agree...so nice to know what we are actually eating hey? :)

Cinnamon ~ How wonderful that you make tortillas for your family...do they know how blessed they are? :)

Have a lovely day!
Blessings,
Camille

Yaay Mavis! I have to get the ingredients to make those stuffed peppers...I'm sure my family will love them too! :)

I've been making our own flour tortillas for about two years. They are so good aren't they!

I agree Jenn...too good! I could see myself craving them! :)

I've never thought about making my own, but after reading your post and checking out the recipe, it sounds pretty easy, and probably alot more tasty than the ones you buy in the store.
Blessings,
Marcia

Marcia ~ I'm sure you will have success...the recipe is super easy...and they ARE much better than store bought! :)