It's inevitable.  It cannot be stopped.
Our children grow and change and become independent.
Or, they ought to.  And, we ought to facilitate it.
When and how is an individual family's decision.  Wisdom is required. 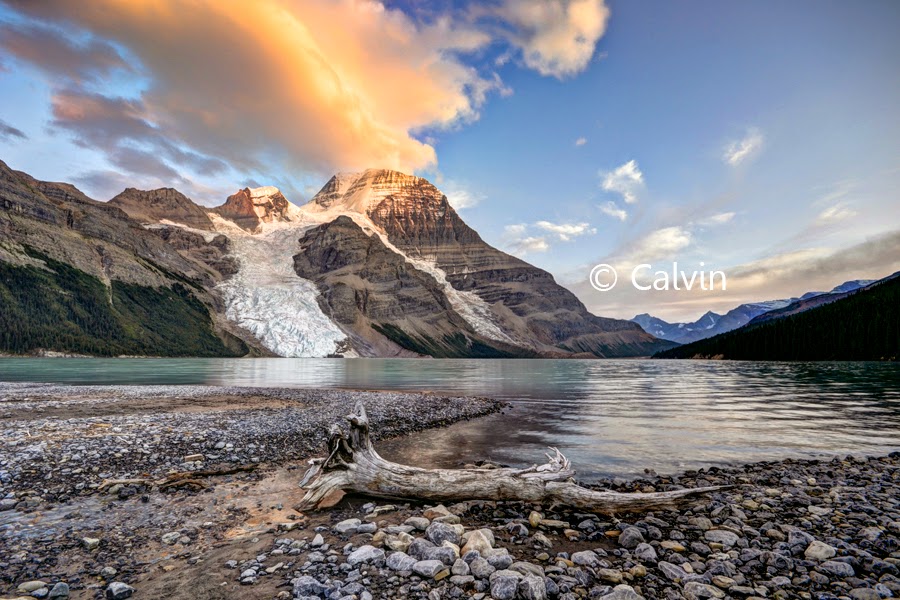 We are in the midst of these changes.  Right now.
Boys to men.  It's happening right before our eyes.
Our young men are spreading their wings. 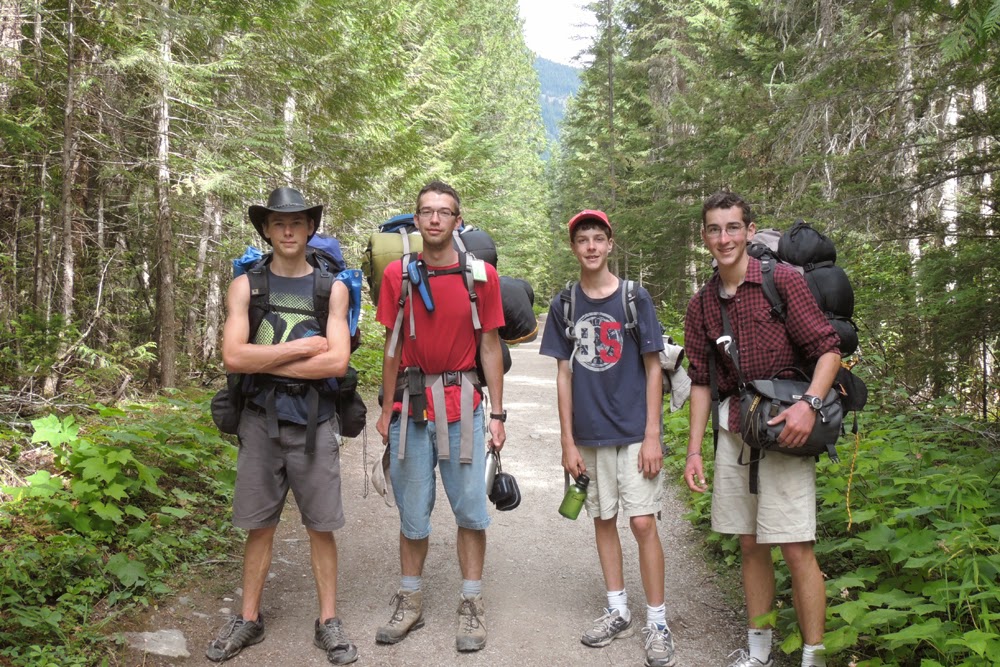 ~ Fraser and Calvin on the right ~

But, that would not be good.  I know it wouldn't.
These really are good and necessary things. 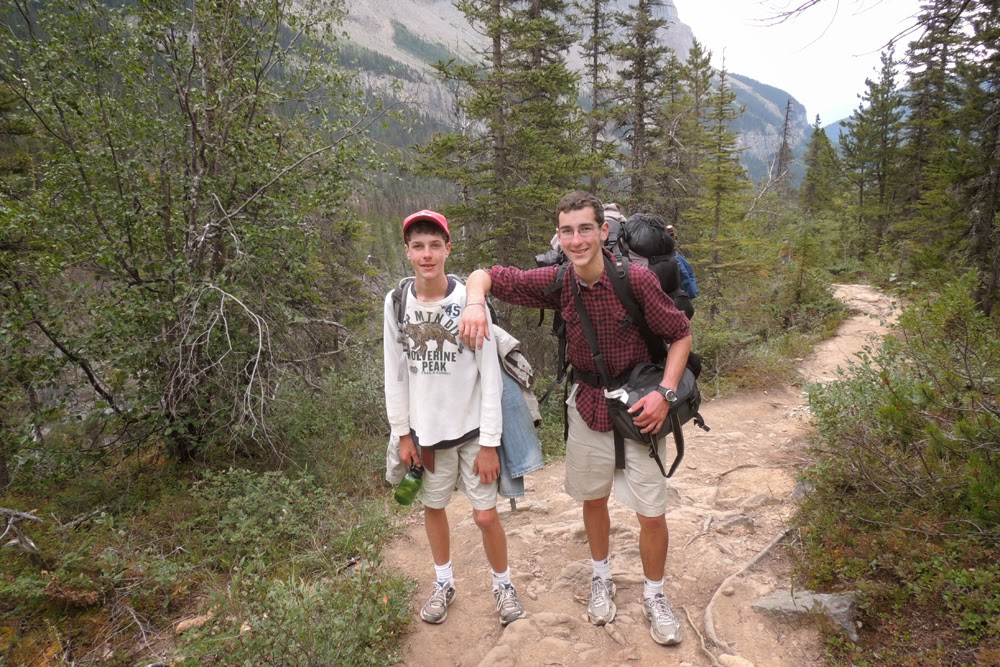 At the beginning of August, Calvin and Fraser piled into a car

with two other young men and travelled clear across the Province.
Right into the mountains.  Out of cell phone reach.  Seven hours away.
Deep into the heart of Grizzly Country.  For real.
(They didn't see any bears, but, they were informed of their presence.)

They slept and ate and hiked.  Day after day.  For nearly a week.

This was the reason behind the trip Emma and I took.
A little distraction was a good thing for this Mama.
Poor Howie ~ he was holding the fort at home, and had
plenty of time to think about what it was that we had done.
(Maybe he began to second guess our decision to let them go?) 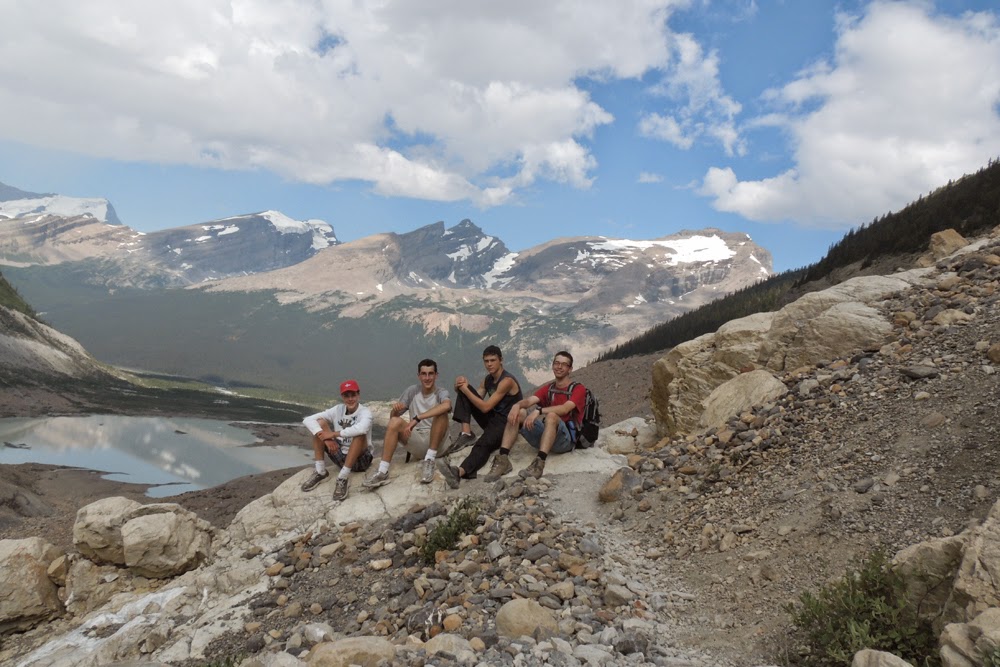 ~ Fraser and Calvin on the left ~

When the boys returned, I had them unload everything into the laundry room.
They were under strict orders not to bring anything beyond its borders.
The report of "I didn't change anything but my socks for five days!" was
not music to my ears.  But, they survived.  And, are the better for it.

On a side note ~ white and camping do not mix.  Just sayin'.
Thankfully, I have a good supply of Oxi-Clean on hand.  It works wonders.

The socks that had been zipped closed in the Ziploc freezer bag,
however, were not salvageable.  Nope.  They were promptly ditched.
Wet socks sealed up for days on end produce nasty results.  Very nasty.
Thankfully, they were the only casualties of the entire experience.

Our young men survived and did it well. 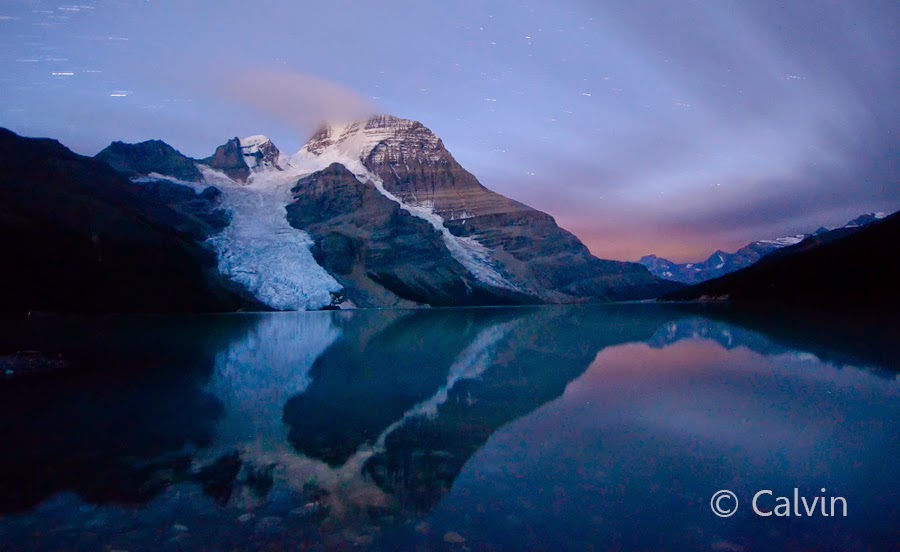 The boys came home filled to the brim with stories and over 1000 images.
By all accounts, it was a wonderful experience for each one of them.
And, as a bonus, the friendships being forged are stronger because of it.
We are thankful for these opportunities for our young men.

But, I must admit ~ we are glad to have them home.
(It is a little messier and louder ~ but, it is good.)

**Photos in this post courtesy of Calvin ~ Thank you my love!  XO
(The first group shot was taken by a French hiker, the second shot was
taken by J.H., and the final group photo was taken using the self-timer.)
Posted by Camille at 25.8.14 Labels: Calvin, Canadian Stuff, Family, Fraser, Just for Fun, Mothering, Teen Years, Vacation

I know it was hard enough when Jacob went to camp this summer...this mama likes her chicks nearby!
Those are some great photos that Calvin took!

Blessings to you my friend!

Amazing pictures! Glad they had the opportunity to take the trip...God is so good!

I'm not sure I could've done that. I'm glad they are home safely and that they had such a good time.

It takes a dad (or any strong male influence, uncle, grandfather etc) to help turn a boy into a man. We moms' tend to be on the protective side. (at least I am) I'm so glad they had a wonderful trip and that the only casualty was a bag of wet socks... yup I would have thrown that right in the trash too! That last photo is pretty amazing, beautiful shot!
Blessings to you and thank you for your prayers

I lOVED reading this post! :) Everything you said was so true. It is hard for us Mama's to let go though. I smiled as I read about the socks in the bag and YES Oxi- Clean I LOVE that stuff!!! Saved many an outfit here.

What stunning photos! If your boys ever come to visit us one day they will just love the rainforest walks here. The scenery is spectacular and there is no risk of bears! Calvin would need to bring multiple batteries he would take so many photos! Socks will get ruined ... by leeches which find their way over boots onto ankles and part of the fun is watching the hikers from overseas(and people like me) screeching as they try to pull off leeches. The photos remind me of the South Island of NZ. No bears, no snakes so the adventurous ones find other pursuits to worry their mothers like jumping off bridges into ravines with elastic cords tied to their ankles! Think you know who I am talking about! So thankful that when they 'spread their wings' the Lord goes with them ... directing their steps and for my adventurous one providing wonderful Christian families for them to stay with when they are away from home.

Taking a deep breath and preparing for my future... How exciting {for them} and a bit nerve wracking {for mom}...

It is great for boys to get to experience these kinds of adventures… it truly does transition them into maturity. God has put things inside of them to help them pioneer through life; thank goodness they think of these things as adventure. Life is difficult to navigate, and how wonderful it is when parents help train their children for the life of the Godly. Train them, shield them, love them, provide for them, and let them fly. Great job. Your sock scenario made me laugh… there is definitely some connection with boys and socks. It has sometimes seemed like a never ending confrontation with socks around here to be sure.
Loved the pictures and imagining their adventure.
Love and Blessings,
Pam

Dear Melissa ~ Not sure I could do it, either...so, escape I did! Thank you for rejoicing with me that they returned safely. :)

Dear Maryann ~ The socks could not be saved. Thank you for your encouraging words and for the compliment to Calvin. He got up at 3am to get that shot. :)

Dear Ann ~ How wonderful it is to know that the Lord is caring for these adventuresome children of ours! He truly is so very, very good! :)

Dear Heather ~ Prepare yourself my friend...it's only a matter of time. :)

Dear Camille,
What a great trip your boys had! Indeed, it is good that they had the opportunity to spread their wings. I had a good laugh about the socks, LOL. Amazing photos, Calvin! Love the contrast.
In Christ's love,
Sandy

I loved the pictures and the stories of their adventures. Sooo amazing and beautiful! What a time!! They will surely never forget it or that their Mama let them go ;-) I totally understand that!

Dear Sandy ~ Calvin will smile at your compliment...thank you! And, yes...the socks!! Dear me! You just wait...these days will be upon you before you know it. :)

Dear Cinnamon ~ You understand much more than I do, my friend! Thank you for your kind and encouraging words. May the Lord bless you as you continue to let your young men go! :)

Ahhh! Hello friend! I've been in the throes of "the motherhood" and have missed your space. What adventures!! Oh what adventures! And those photos. Calvin. Is. So. Talented. Like-a modern day Ansel Adams. Amazing. Love and miss you!!

Dear Jennifer ~ I have missed you, too! But...BUT...I *almost* get it...not quite (I only had four and never two babies at once!)....you have your hands FULL!! Your words made Calvin smile...thank you for your kind encouragement to him. Love to you! Camille