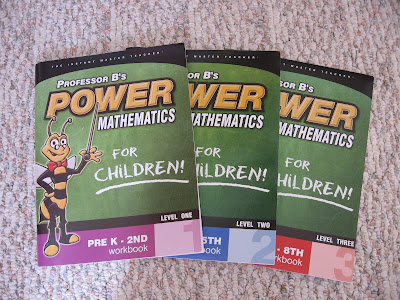 What does the title of this post conjure up within your heart? Fear? Dread? Anxiety? PANIC?! :)

We began educating our children at home only a few years ago and I didn't know where to begin with curriculum. It was all so overwhelming. I asked a friend who was homeschooling six children at the time to advise me. Apparently she had tried many different types of math programs and books, but hadn't found what she wanted. She had been looking for a curriculum that would explain and make understandable the "why" behind the math. That's when she told me that Professor B Math had been a blessing to her family. One of her children, who had previously hated math, began to love the subject...now there's a "success story" for you! It definitely influenced me.

When we got the first package in the mail and began working through the course I wanted to hurry my older child through the process thinking that he was beyond the concepts and should begin in the middle somewhere. How foolish! While working with his brother, who was in grade two at the time, the light bulb went on in my head! (I actually got really excited...in a MATH lesson!!) I discovered that it was necessary to begin at the beginning and I was amazed with the results. Austin, who had been struggling in math, was finally "getting it"...and I was so excited. Here we are three years later, and he is still reaping the benefits of having used this excellent program.

**I have noticed that there are those that get reimbursed for their "reviews", which is just fine. But, I am not one of them...this (and all other recommendations that I have made) are completely unsolicited and represent my humbly submitted opinion**
Posted by Camille at 21.10.09 Labels: Curriculum, Education

I've heard of this and it was highly recommended. I've got curriculum I'm using now, but if it stops working for me, I'll definitely be trying these. Thanks for the recommendation!

Jackie ~ You might just want to get the first workbook and see what you think. (It is important to teach the method as laid out in the program...there is a method to follow). It compliments whatever you are doing as it helps the child (and parent) to stop dreading the math lesson. It really is AMAZING how it unlocks the "mystery" of math. I got so excited when the light went on in MY head! :)
Blessings,
Camille

Would this work for my fifth grade son? He is dyslexic. Is it something we could start now even though he is older?

You might want to click on the link I provided and see if there is a way to get your question answered...I'm sure they have something in place like that.

I would think he could benefit from it...can he learn things like oral repetitions? It is really powerful...for the addition and subtraction facts the children learn "chants" to link the numbers to each other.

It is so amazing to see the light bulb go on! My oldest was in grade six and we started at the beginning...it worked really well for him! He was struggling with Math and this helped him to "get it"...he is now is grade nine and does algebra with virtually no problems.

It is best if you can spend about 20 minutes a day doing this program with the child...the concepts build and one another.

Let me know what you think of it!
Blessings,
Camille