Last Friday was the presentation day for the children's Olympics projects. We met in the local library and the children displayed their work. Each chose a different topic within the Olympic theme. Austin wore the torch bearer suit Howie wore when he carried the torch for the Calgary 1988 Olympics. That was very special for Austin as his project was all about the Olympic Torch and its origins and history. 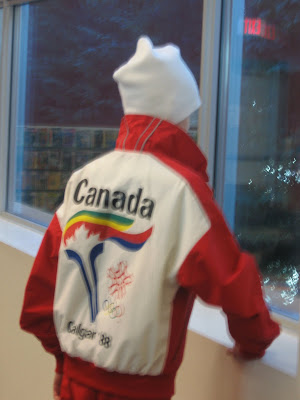 Grandpa and Daddy were our special visitors. You can see all four of the projects lined up here. Austin's is at the far left. Fraser's is next ~ all about the participating countries in this year's Olympics. Calvin's is third from the left ~ Alpine Skiing was his chosen topic. Emma researched the history of Figure Skating (with help from Mummy). Each of the children wrote a research paper as well. 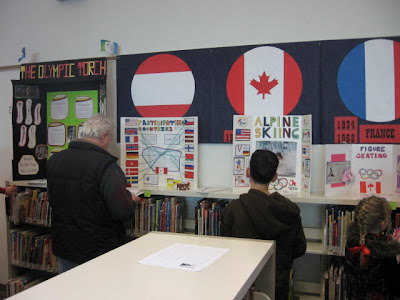 One of the teachers was interviewing Austin in this photo.
All four children are in front of their displays. 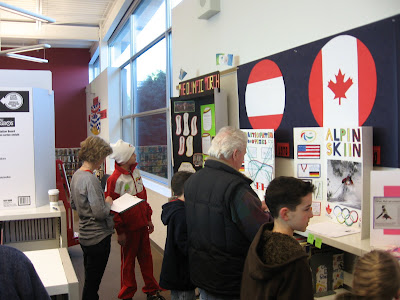 We also had the opportunity to go skating as a family prior to the library time. All the other children involved in the day were able to participate as well.
Left to right ~ Fraser, Austin, Calvin and Emma. 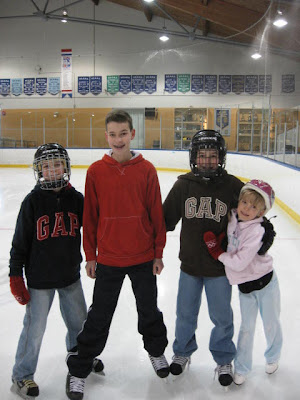 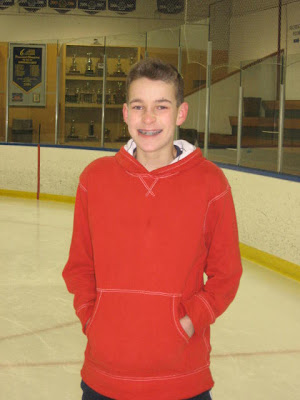 Howie with Calvin and Fraser... 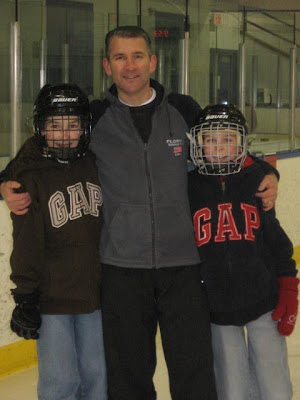 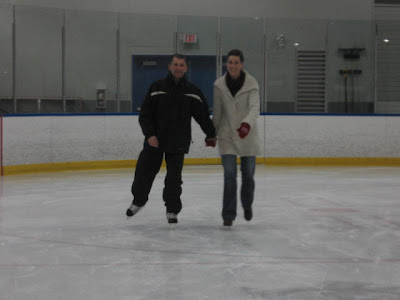 Howie has been very busy at work this last while,
so it was extra special that he was able to join in with us! :)
Posted by Camille at 23.2.10 Labels: Education, Family, Vancouver Olympics

OH how fun all that looks. What a lovely picture of your husband and you on the ice. Our nearest rink is 2 hrs away. So we ice skate the old fashion way....on ponds :-)

What a neat project to work on together! Educational & fun!

How neat Camille that everyone is involved. I love the projects and I bet the teacher's did too! You have such a handsome family and you sure look cute in your skates :)

Have a blessed day!
Love,
Sharon

Wonderful projects! Looks like you had a great day as a family.

Thanks for the encouraging comment you left me today!

How was Howie able to carry the torch?

What a beautiful family!!! I'm so glad your husband got to join y'all for such a special day.

Cinnamon ~ We would love to skate the "old fashioned way" more often...we live in the Pacific Northwest, so it is rarely cold enough here for that! AND it would be free...fun times! :)

Nadine ~ Thanks! The kids (and I) learned quite a few new things and it was fun too! :)

Sharon ~ It was a blessing to be able to be involved in this learning camp...the Lord has provided a wonderful group of homeschool people right here in our own neighbourhood and we are thankful. Thanks re: the skating picture! :)

Jenn ~ May the Lord bless you as you seek Him day by day...he is faithful and will give you exactly what you need.

Mavis ~ He filled out ballots that went into a draw...nothing spectacular and no great achievements were involved ~ would like to say they were, but nope! It was definitely more difficult for this Olympics...you had to have contributed to society in some way. :)

J ~ Thanks for your sweet comment. We were glad it worked out for Howie to be with us too...he has been super busy lately! :)

Very cool! Love the picture of you skating with your honey bun.

Thanks Jackie! I think the last time we skated together was about 4 or 5 years ago, so it was a special treat! :)

I think is soooo cool. What an experience.

I can't believe Canada got 14 (?) gold medals!!!!!
I was watching the hockey game Sunday night, and they won! My sister and I got up adn started dancign around screaming! That night my dad was out, so he taped it! I told him when he got home, and he was extreamly excited as well!


P.S. When go on a blog that is new for me, I usually comment on every single post!

No worries Meghan ~ I read all of them...you are an encouragement to me! :) Thanks for taking the time to browse through.

Oh yes, Canada did amazingly well, didn't they? How fun that we are a part of that hey? :)