What it Became ~ Part Four

We lived in our home for nearly nine years before the
pony wall separating our kitchen and dining room came down.
I suppose someone thought installing one was a good idea.  Long ago.
However, we didn't like either the concept or the practical outworking of it.

We knew that if we ever were to make alterations to our kitchen,
the pony wall would be one of the first things to go.  And, it was.
Twelve years later, it's still one of my favourite kitchen non-features.
I do not miss it at all.  Not one little bit. 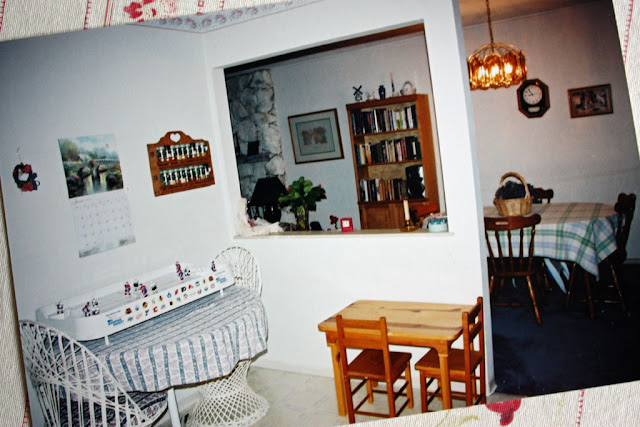 While I was away for a few nights with the children,
Howie took a sledge hammer to it.  Being absent was a good thing.
He did have the foresight to cover the furniture with plastic.
One of the signs of a good man.  Wouldn't you agree?  :) 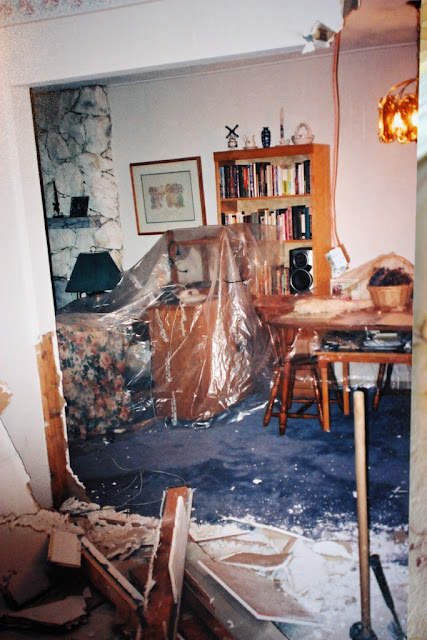 The light switch hung from the ceiling for awhile.
Nice feature, don't you think? 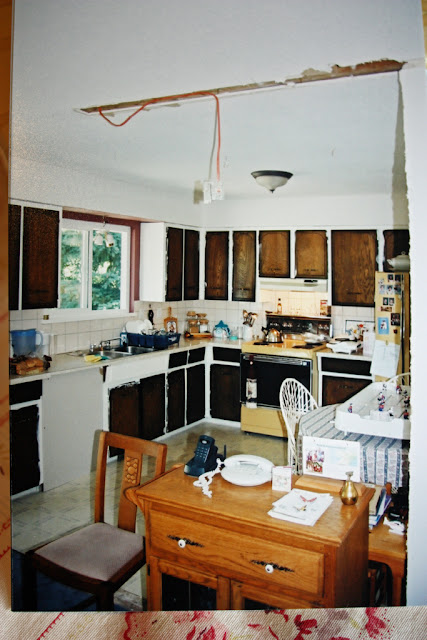 We continued to live and work and do everyday things as best we could.
See my little peanut helping her Mama in the kitchen?
Actually, making messes was something that fit right in with the general theme.
Nothing seemed to phase our precious little people. 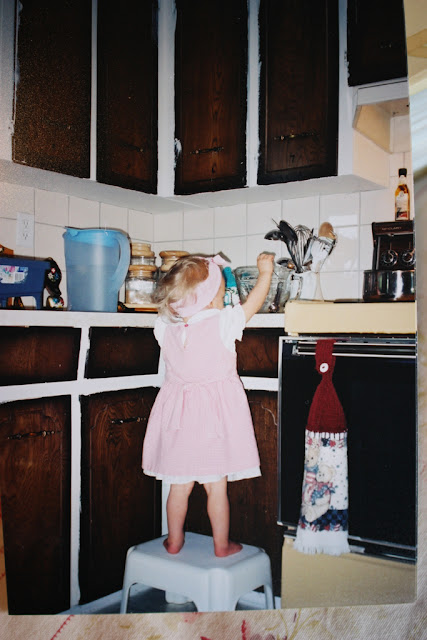 It got much worse before it got better.  "Mess breeds mess", as the saying goes.
Building supplies, along with many of our belongings, needed to be stored
somewhere while the work was being done.

Of course, the logical location for those things
was any empty space not being worked on at that moment.
So much shuffling and rearranging took place during our home renovation.
We constantly felt like we were fighting a losing battle. 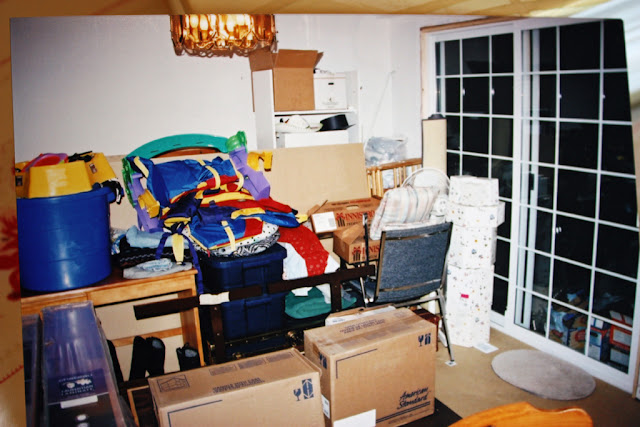 For quite some time, we had to eat single file in the kitchen.
See all four of our children with food set before them?  Close quarters.
At one point, we even had the piano crammed into this space. 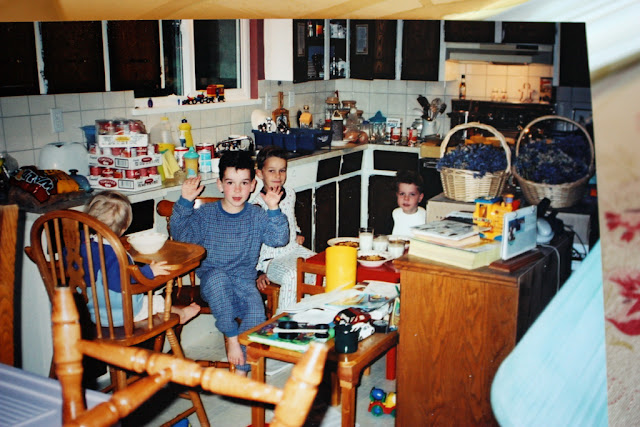 It seemed as though we were battling chaos at every turn.
(Have I mentioned that I don't like mess?  Well...I don't like mess.)
The Lord was teaching us valuable lessons.
I truly do hope we learned those lessons well.  ;-) 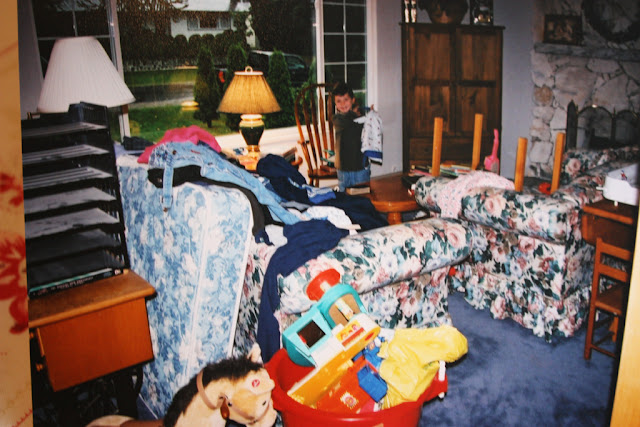 Both Howie and I thrive when things are orderly.
This was anything but that.  Obviously. 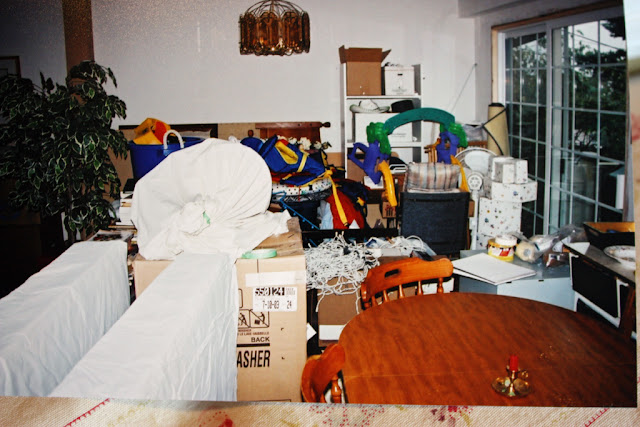 We'd had a quote on new cupboards and counter top (I think it was included).
At the time, the price came in around $30,000 for that one job.
Uh....NO!  We decided to paint the boxes ourselves and reface the cupboards.
My Dad helped rebuild the counter and installed the doors for us.

We ordered doors for our cupboards directly from the manufacturer for
approximately $1,100.  All said and done, the job that would have set us
back $30,000 ended up costing no more than $2,000...sinks, counters and all.
Oh, and elbow grease.  Let's not forget to mention that part of the equation. 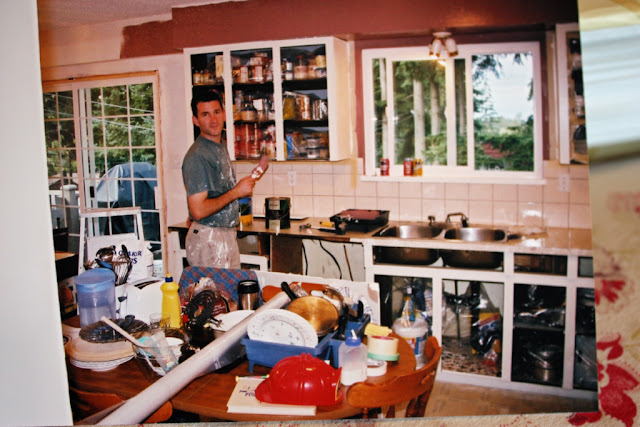 Laugh or cry.  Sink or swim.  It was a little bit of a stressful time.
But, the Lord saw us through it all.  Step by step.  Moment by moment. Once the doors and the floor were installed,
it felt a whole lot better!  See what I mean?
I was starting to be able to breathe again. 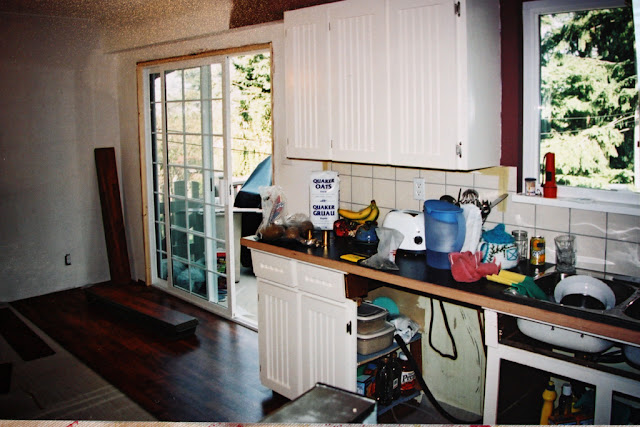 Y'all still with me?  If you are....thank you for hanging in there.
Still more to this story....coming soon.

Sweat equity is great! It may not feel like it in the moment but thinking of all the money you saved afterward is rewarding. Sweat equity in our first house helped us put a substantial amount down on our second house.


The children seem to be comfortable right in the middle of it all. Things seem to have been coming together nicely at this point. Cabinets and floors make a world of difference! At least to us women!

What a difference the open wall made!

Camille,
I can relate to all of this. We went through a whole house remodel in California while homeschooling our 3 kids. I'm not sure if I would do it again (the remodel that is). However, the Lord taught us much during this time so it was worth it. Can't wait for the next part of your story...

what an adventure, Camille...and kudos to Howie for covering evering with plastic. I look forward to reading the next installment! xo

Dear Camille,
I've been following along all 4 posts, wow, what a journey!! But God saw you through, praise His name!!
His way is the best, isn't it? How our plans sometimes don't match His, but it all worked out well. You have such a beautiful house, a warm home, a loving family, what a blessing.
Can't wait to read your next post. :)
Hugs,
Sandy

Wow!! You are one strong woman! Love, love, love seeing these.

Patty ~ You are so right...looking back on it is rewarding. I don't think we really realised how much of ourselves we poured into our home. What a blessing that the Lord gives the grace in the midst of all these things. I am sure you look back on your first homes as blessings. Hugs! :)

Christa ~ I agree with you....it's not something we would ever wish to do again. I think those who have gone through it understand why. What a blessing that you were seen through those days by the Lord. He is so good to us, isn't He? Hugs! :)

Julia ~ Adventure is definitely one of the ways it could be described. Thank you for coming along for the ride. Hugs to you. :)

Sandy ~ You are a sweet encouragement my friend. Thank you for your kind words about our home....and, thank you for joining me in reminiscing about it all. You are right....God's ways are always best. Hugs to you all. :)

Leanna ~ Strong? It sure didn't feel like that at the time! I am glad you are enjoying these posts my friend. Hugs to you. :)

I don't think I even knew there used to be a wall in the kitchen! Wow! Such an amazing difference. I really like the kitchen to be open too. Can't wait to see more!!

Esther ~ It's a good thing to forget about that wall. :) Thank you for coming along on this journey of remembering. Hugs to you! Love, Camille

I'm still with you Camille... lovin every messy minute... and sympathizing with you. You all are blessed with a wonderful persevering spirit. I love the kitchen cabinets; very nice fronts. I know what you mean by the cost of redoing the whole thing... we have looked into it ourselves, and ended up painting our cabinets a couple of years ago... we still need the new counter top, and hope to do that soon... we are trying to get some things finished in this house, so we can get it sold. I love how you took the pony wall out. I imagine it really opened up the kitchen.
Hugs,
Pam

Pam ~ One thing seems to lead to another in a project like this was. Thank you for your sweet words...you bless my heart! Hugs. With love, Camille

Lovely, mess and all. I think I'm living in the re-construction phase and have been here too long. Your posts have given me hope for a better future ;-)

Cinnamon ~ Awww...hang in there my friend! Your family is happy and content and loved....that's what matters!! Love, Camille