Nearly twenty-one years ago, we moved into our home.
Our dream home it wasn't.  In fact, it was never our intention to move in.
Our plan was to flip it after a little sprucing up.
However, the market went flat and the house did not sell.

God's plans are always better than ours.
I must admit, though, it took quite some time for us to realise
that this was one of His very good gifts to us. 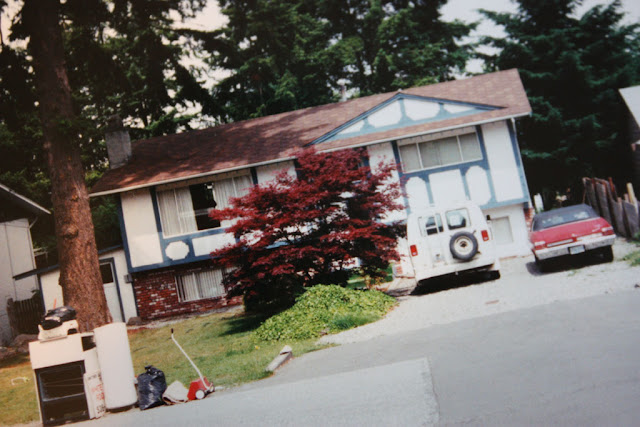 When we first moved in, the house sported blue carpeting which was
stained pink in places due to the previous owner's dog.
Those stains were everywhere. 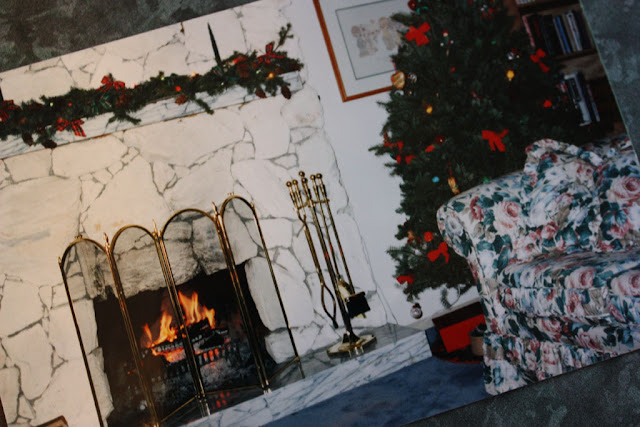 The kitchen had brown appliances which we swapped out
for harvest gold hand-me-downs from Howie's parents.  The cupboards were dark brown.
The windows were of the single pane variety complete with brown aluminum frames. 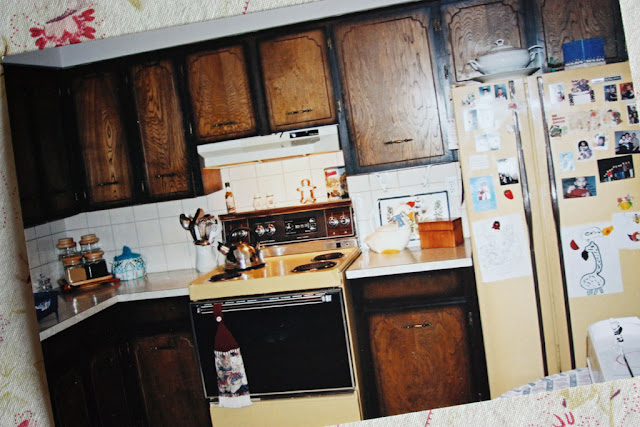 The bathroom featured a yellow sink, toilet, and tub.
The septic field would be stressed to the point of failure in a matter of years.
And, the roof would need replacing.  Twice.
We had a bout of slugs and mushrooms inside a basement bedroom
due to an improperly closed in carport. 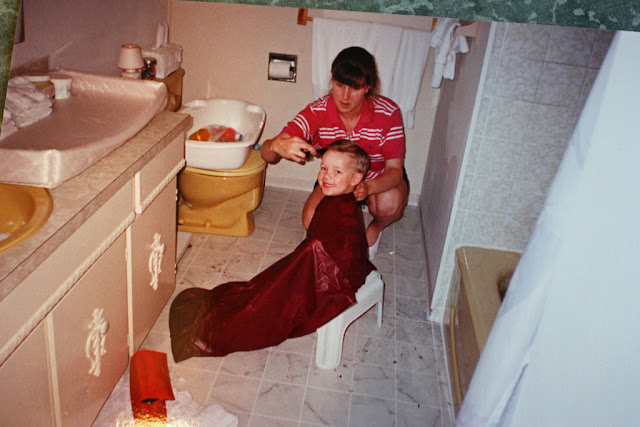 I'm ashamed to admit it, but, we felt it wasn't good enough.
Just a stepping stone to something better.
We had no intention of putting any money or much effort into this house.
We lived in it just as it was for about eight years.

The Lord should have stripped our home off of us and never given us another.
But, He so graciously allowed us to stay.  How thankful we are that He did!
My plan was to document our renovation journey, but, it didn't properly get done.
Until now.  Want to come along for the ride?  There's more to this story.

And, it does have a happy ending.

Do you have a renovation story to share?  Are you in the midst of them?
Or, have you lived through renovations in the past?  Do tell all.
And, if you post about it on your blog...please let us know!

nope, but we are saving money to get a new roof next year. It's time after living here in our once new house. Thanks for sharing your journey in words and pictures! It's amazing what we learn along the way in our lives journey! God bless, my friend!

Camille, love stories like this. I am impatiently waiting for the rest of the story and pictures. I can completely understand how you think and feel in regards to the plans you have for your lives; what you think of and dream for and the reality of how things really turn out. The blessings are there all along, but our ideas and expectations often throw us off. We have some similar stories in our life. I love seeing the pictures of where you began. I will be watching for the next segment with anticipation.
Hugs and Blessings,
Pam

Contentment. Something I can struggle with from time to time. It's nice to read when others have the same struggles for we know, then, we are not alone. I loved seeing the old pictures and realizing how much you guys have done to your home over the years! We work away at ours too...slowly but surely...constantly reminding ourselves that this life is just temporary! The Lord has taken such good care of us and I am truly grateful!! :)

Excited to see these posts.

Bevy @ Treasured Up and Pondered said...

I know the feeling. We're renters. But, still the same. One of these days we'll own... but... until then sometimes waiting on HIM grants more blessings than ever imagined.

Can't wait to hear the rest of you story...

Can't wait to read the rest of the story. :) Our homes have never been perfect but honestly, I am VERY happy. I feel blessed everyday. I can become overwhelmed with things that may not work well somedays but I am always so thankful when I remember that more often then not, things do work. :) I often remind my children that this is the home that God has provided and you know when we go away we are always happy to come back " home. " :) We are soooooo blessed!!

Looking forward to the rest of the story. I know there have been changes since I've been over, yet you make your home a very welcoming place to be with your family.

I can't believe that is the same house!! You have done so much! I love before and after pictures. I can't wait to see more!!

I, too, am enjoying seeing the before of where you started. I can totally relate to moving into a house that you don't want to put money into and don't plan on staying. Your words encourage me to remember there is a bigger picture than just what I can see.

Can't wait to hear the story... We renovated our first home, but only ended up staying there for 5 years.

Although we are only renting now, I've found myself grumbling in my heart this week. Your post was a timely reminder to embrace where God has planted us.

My friend, I cannot wait to read the rest of the story! DIY projects are my favorite kind :) Love your outlook on life and the house. So inspiring!

Becky ~ Ah, yes...the roof conundrum. Over time they do need replacing! I hope you have a leak-free winter as you wait until next summer. Truly, it is amazing what the Lord teaches us along the path of life through things like these. Hang in there. Hugs! :)

Pam ~ Awww...thank you for your sweet words of encouragement my friend. How true it is that what we plan and dream about often is not what happens. But, would we change anything if we could? What a blessing it is to know that the Lord is in it and His ways truly are for our good and His glory. Such a comforting thought! :)

Katy ~ Yes, slowly and surely. One thing at a time. Hang in there!! This is the journey the Lord has you on and He will see you through. How precious it is to rest our hearts there. Hugs to you! :)

Bevy ~ Waiting on His perfect timing is always the best thing to do. How impatient I can sometimes be!! It's a blessing to my heart to hear your's through your comment. :)

Nikki ~ Thank you for sharing some of your thoughts and journey with us here....it's encouraging to read how the Lord has provided you joy in the midst of some of the trying things of keeping house. Yippee for working servants (appliances)! Hugs to you. :)

Angela ~ Your words are a blessing to my heart! Thank you for being a sweet encouragement. The changes in recent days have been minor compared to the BIG things we did in the earlier days....that will become evident in the posts to come. :)

Esther ~ I was going through old photos for this series and YOU were in some...remember our Christmas gatherings? Thank you for your kind words about the things we have done...it's definitely been a work in progress through the years. :)

Cinnamon ~ Oh, yes...the big picture!! It can be so easy to lose sight of that, don't you think? What a blessing that this is not where we are to put our roots down. There is such freedom in that! Hugs to you. :)

Heather ~ Awww...hang in there my friend! So sorry you have been facing some challenging things in your current home. May the Lord give much grace and peace and joy in the midst of it all. These are precious, precious days! Hugs to you. :)

Hello Camille...I see I haven't visited in awhile and have much to catch up on! Your blog is always so lovely to visit...{{Smiles}}
I do look forward to reading the different parts of your home renovation story...

Right now we live in a fairly large rented home on a big piece of land about 15 minutes outside of town and oh! Are we so grateful! It is perfect? No! But then there is no perfect situation...we are just very thankful for being somewhere where the little girls can run and play and we can keep our chickens and grow a veggie garden! A big blessing in this day! Of course we would dearly love our own home, but we know that should it be God's will for us, He will provide what we need when He sees fit...
It is such a blessing to trust Him...He does indeed know best!
Wishing you a blessed Tuesday...much love to you!
Kelly-Anne

Kelly-Anne ~ You are so right....the Lord does all things well and knows best. What a sweet blessing you are to your parents in your support of them in their home journey. It sounds like it's a lovely spot the Lord has you in! Hugs, Camille