What it Became ~ Part One

The journey with our home began when Howie bought
it without any input from me.  And, without an inspection.
Two strikes against it.  But, we weren't planning on moving in.
The house was to be whipped into shape and sold.  For a profit.

Those were our plans.
And, it really had nothing to do with me.

At least, that's what I thought at the time.  It's obvious how that turned out, isn't it?
My exact words to Howie when he drove me past the house for the first time were;
"Oh, Howie!  We aren't going to LIVE there, are we?".
His answer was an emphatic NO.  I was relieved.

Click here to see some of what I saw.
It was most definitely not love at first sight. 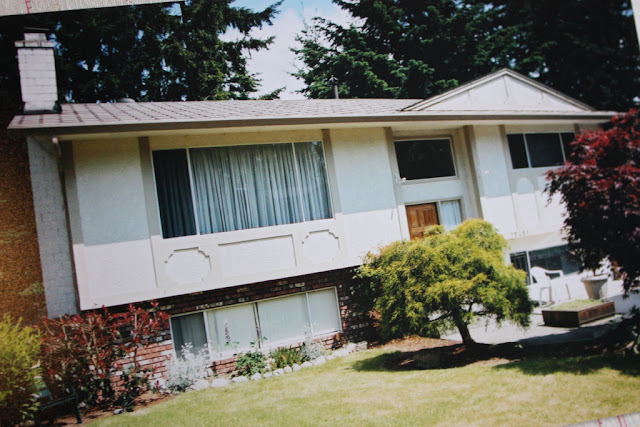 Six months of sprucing up and cleaning took place.
We put the house up for sale and it didn't sell.  We waited.  We prayed.
The Lord softened our hearts and provided a way.  Then, we moved in.

Nothing much was altered after the initial phase of making it our own.
We prepared the nursery for our baby-on-the-way (Austin) by stenciling
teddy bears on the walls and painting the lower half of the room hunter green.
Howie's home office was painted another bold colour and wall-papered.
Curtains were made and hung and deep cleaning was done.

That was about the extent of it. 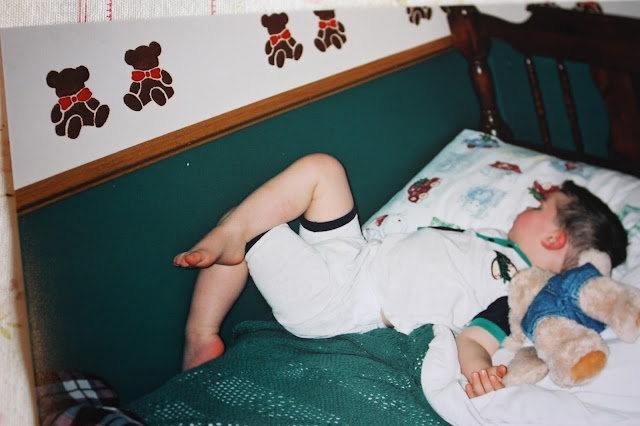 Tenants moved in beneath us.  A laundry room/shed was shared between us.
The suite was completely separate from our living space.
My Dad had been commissioned by us to put up a wall, among other things.
(On a side note ~ he has been such a help to us over the years.
A huge blessing.  Thank you, Dad!  XO)

Four years later, after our second set of tenants had moved out,
Howie brought his work home and became our basement tenant.
We occupied the upstairs of the house and kept the suite separate.

It was still our intention to sell.  To move on.
A house with a suite in our area would sell best.
So, we kept it intact.

More babies were born, and, we found ourselves
bursting at the seams.  With only two bedrooms upstairs, and
access to one basement bedroom, we felt pushed to our limits.
The six of us occupied 1100 square feet of our home.

It was snug.  We contemplated selling.
But, our home had problems. 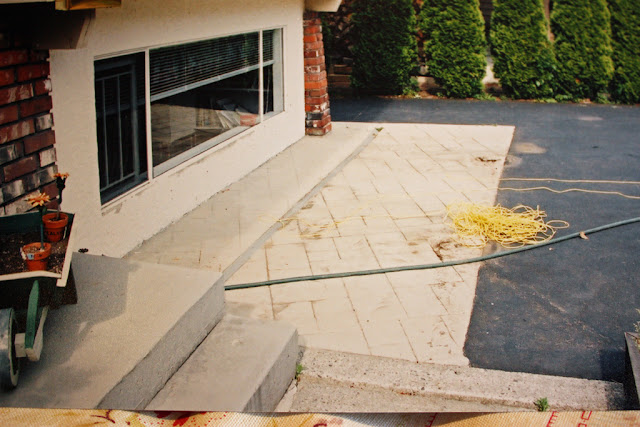 The most pressing concern was the failing septic field.
Four children and all the laundry little ones require had tipped it over the edge.
A second major concern was the improperly closed in (not by us)
carport-turned-bedroom which had water damage and leak issues.

It became abundantly clear that we couldn't sell it in the condition it was in.
Surely, anyone who might have been interested would be put off
by these deficiencies.  Any normal person would run the other way.
So, we ran headlong into renovations that would stretch out
over the following eighteen months and beyond. 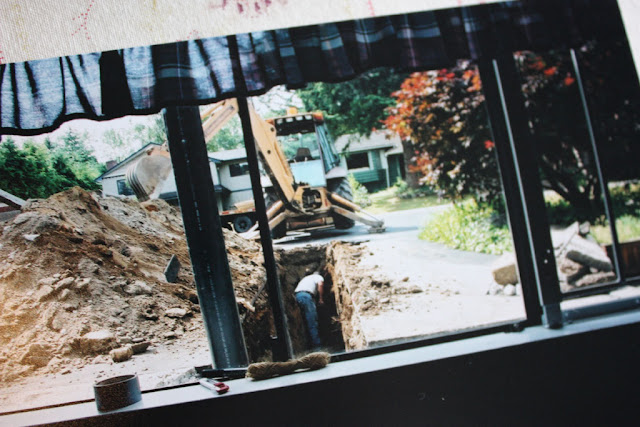 Thankfully, we knew someone who could help.
Unfortunately, the only way to hook up to the city sewer was by going
the most direct route.  Through the house from front to back!
That trench was on its way inside.  Not a fun prospect. 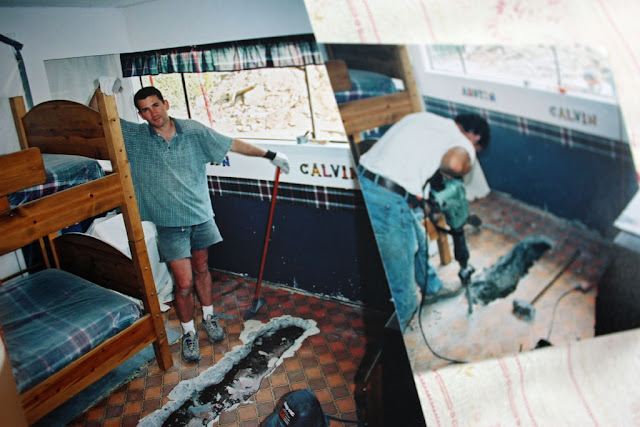 Jack-hammering in the house is not for the faint of heart.  Just to be clear on that point.
We would work into the evenings after the children were in bed.
It has been proven that if they feel secure, they will sleep through almost anything. 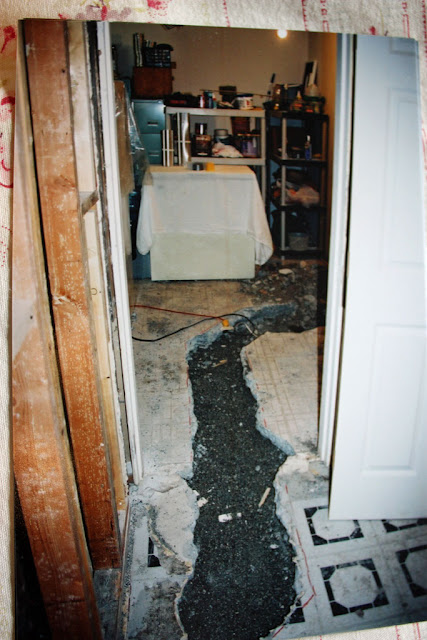 That trench went through the boys' room,
under the wall to the laundry room, down the hall,
and through the basement bathroom to the back yard.
It got worse before it got better.  These photos were taken
when this part of the basement was still separated from the upstairs. 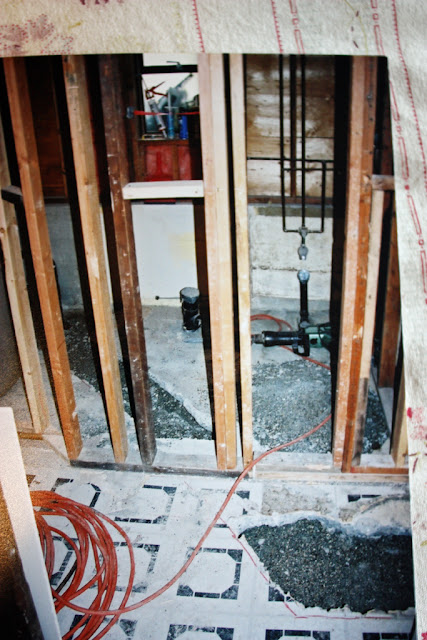 Remember my reference to slugs?  And mushrooms?  Inside the house!
They were there due to a hole that was only discovered when the
outside wall was removed.  Former renovations (not ours) gone wrong.
When it rained, I vacuumed.  With a wet/dry Shop Vac.
Often two full barrels of water were sucked out of that carpet.

Prior to the boys moving into that room, we had it fixed.
But, it turned out to just be a Band-Aid solution.
The entire wall had to be removed and rebuilt from the foundation up. 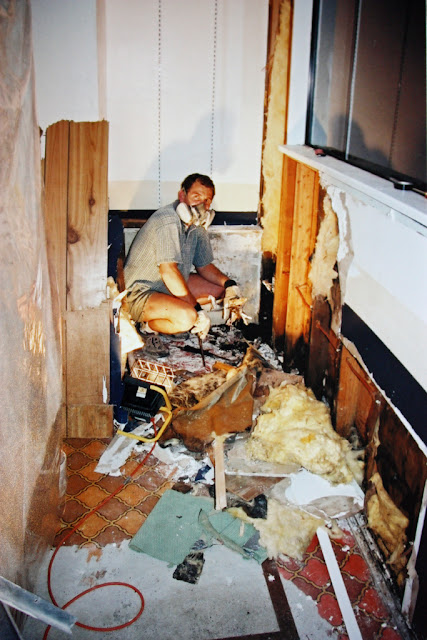 This is the corner where the hole to the outdoors was.
At that time, it was Austin's and Calvin's bedroom.
Currently, it's the room that Fraser occupies. 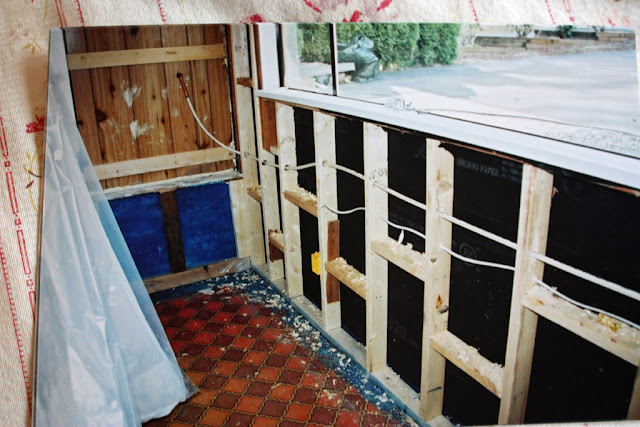 It was deemed the wisest course of action to put these things right.
And, in the process of doing so, we made it our own. 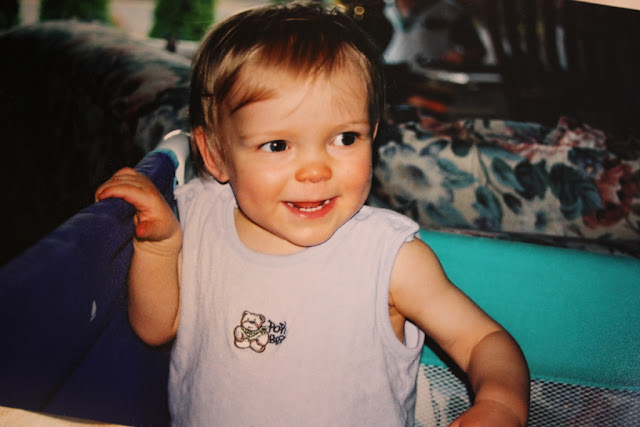 That's when the fun began.  And the grey hair started coming in.
And the sleepless nights returned.  Blood.  Sweat.  Tears.
All while raising up a young family.  At the beginning of this adventure,
the children ranged in age from eight years old down to one.

It nearly finished us off.
We said we would never renovate again.
Never say never, right?  Right.
More to come....

I think I'm having an anxiety attack just reading this....I totally understand reno's...but to this degree, I'm not sure.

What a mess to go thru the whole house for water pipe. Goodness, so thankful you lived thru the process.

Oh wow, a lot of work to be sure. I have often prayed that we could see the things the Lord had ahead for us, then later felt so glad that I didn't know until I was almost through; Difficult situations are easier to get through one step at a time, I think. Remodeling and renovations are like that… I mean of course you prepare yourself for work and mess, but you don't really realize the extent of it, thank goodness, or we might not begin. I can imagine that once you had done all of that work you would be attached to the house. It became a labor of love without you realizing it.:) .. I love to watch shows like "Fixer upper" on Netflix. There is something so satisfying to seeing something renovated and transformed. Well, my friend good job, and I picture you all so cozy there now.
Hugs,
Pam

Wow, Camille!! I remember you talking about this but seeing it in pictures!! Oh my! It's funny (not haha) how if someone told us what it would be like, we could never picture ourselves being able to do it, but looking back and seeing what we CAN do, AFTER we do it (with lots of tears and sweat and prayer!) is amazing. Love these pictures and the message of determination and perseverance in the face of adversity they give. It would have been easier to cover it up and let someone else worry about it but what a huge life lesson your children (and you) would have missed out on! Beauty really can come from ashes! No offense about the ashes part but I've had the pleasure of being in your house and I know how beautiful it is. I can't believe I'm looking at pictures of the same house!!

Connie ~ We had no idea it would be as stressful as it was. But, we really had no other choice. It truly is a blessing to know that whatever the Lord brings us to, He will see us through!! Hugs. :)

Becky ~ We are so thankful that He saw us through that time! How good our Lord is to us! Hugs to you. :)

Pam ~ Ah....yes, a labour of love. That is exactly what it became. As we shaped the house, the Lord was using it to shape us! Interesting how that works, isn't it? As for the knowing ahead of time what is coming...I really would rather not. I think you are right...one step at a time is best. Hugs! :)

Esther ~ Hmmmm...covering it up would have been the easy way in the short term, but, you are right, the Lord had valuable things to teach us through the process. It is amazing what we survive, isn't it? How good our Lord is to only reveal to us what we need to know for the very next step. It would have been too much to know what we were in for when we began. Hugs to you. :)