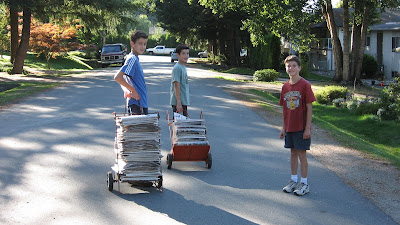 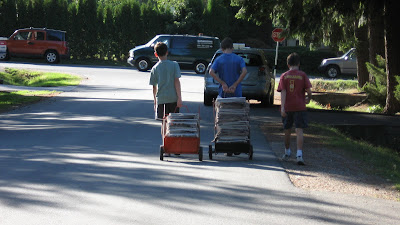 **As with all my pictures...you can click on the images to enlarge them**

Delivering the local free paper has been a staple activity in our family for over four years now. We began with one paper on one route and it grew into two papers on the same route and then we added in more homes. At the beginning we all (the four children and I) went together. Emma was three and Austin was ten and the other two were in between...it was an adventure.

We saved our pennies and then dollars until eventually we had enough money to take the family on a seventeen day long vacation. We flew from the West Coast all the way to Florida! It was so exciting for the children to think that they had earned enough money to make this trip possible! We used AirMiles and a rewards Visa to get whatever we could for free, but the route supplied the funds required for everything else. Now the boys are able to do the route on their own without the help of Mum! Where does the time go? They really do grow up way too fast.
Posted by Camille at 3.10.09 Labels: Austin, Calvin, Enterprise, Family, Fraser

Thank you for coming to visit my blog and for leaving a sweet comment.
I have been enjoying my visit to your blog and will be back to visit again!

It was a pleasure to visit your blog...I look forward to returning. Thanks for your encouraging words...I'm glad you stopped by.

May the Lord bless you today!
Camille

That's great! Around here it's adults who do the paper routes these days. I haven't seen a kid do a paper route in years!

Manuela ~ I remember thinking that too before our paper route days...and it was then that I determined that if we ever had a paper route it would be a family affair. (When the boys were old enough to relieve me of my duties...I gladly turned it over to them).

The purpose of it was/is to instill some work ethic into our children. Boy, does a paper route in the Pacific Northwest ever do that for you...LOTS of rain! ;-)

Have a wonderful weekend!
Camille

Your post reminded me of when my little sister and I had a paper route back in the 70's. Our dad would help us get the papers folded every morning (early!) in the snow and rain. He would do anything to instill that work ethic in us and I think it has paid off. Congratulations to you and your kids for saving and being able to go on such a great trip. And, thanks for visiting my blog.

That is really neat! I bet they appreciated the trip that much more.

Paper route seems to be a great way to teach kids some of those values...your story is great...I can relate to the challenges of snow! There are also other ways to instill those values into them too, but we are thankful that the Lord has given us this opportunity.

Welcome back Cheesemakin' Mama...I've been to your blog a few times and know your first name...do you mind if I use that to address you in future, or do you prefer this title?

To answer your statement about them appreciating it...I was actually surprised how much of an impression it made on them! They were so excited to take Daddy on a holiday and pay for it!! :)

Blessings to you both,
Camille

Camille,
Addressing me as Jackie is just fine. I'm really enjoying your blog.

Thanks for the encouraging words Jackie...I'm glad you visit here.

May the Lord bless you this day!
Camille

Wow! Amazing - if that doesn't teach your children a good work ethic I don't know what will? That reward will be remembered for the rest of their lives!

Thanks for being such an excellent example of a mom who works along side her children - training them to work hard.

Welcome Courtney ~ Thanks for leaving such an encouraging comment!

We need to look to the Lord for His help...always...I am so conscious of this. My husband and I feel this more and more as the children are growing up. So thankful that the Lord promises to give wisdom if we ask Him for it! (James 1:5)

I think we all need "paper route money." We have a giant piggy bank that we finally filled and cracked open this spring and together with free airline and hotel miles we had enough to go to Europe for 2 weeks. After we emptied it out we super glued the pig back together and as soon as we get him filled again we will be off on another adventure. Delayed gratification is a wonderful thing to teach your children. It makes the "prize" so much more meaningful then spending a few dollars here and there on little things :)

Thanks for your encouragement Mavis...I really appreciate it!

After we took the trip with our kids we wanted to prove a point...so we told them about people who would have been in Florida at the same time as us and not have saved prior to going. They would be going home to pay for the holiday that they had just taken.

How we made the point was this: We told them that if we had done that we would just be starting out in the paper route business and it would take us LONGER to pay the holiday back than it did to save for it (with interest). Now THAT made an impression!

Mavis ~ One more thing...i neglected to say "CONGRATS" on your own "paper route" fund...what an exciting thing to be able to do such a trip from "change"! I must say that I feel sorry for the pig...being smashed and then glued only to look forward to being smashed again...but I suppose you know what you are doing! ;-)