My Two Campers.
This first photo is of "the boys" on a trip to Mayne Island.
I still think of them like this.
When did they change?? 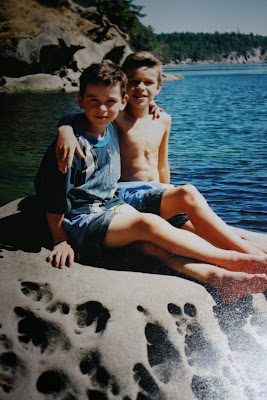 ~ 2010 ~
Austin on the left and Calvin on the right.
They are thirteen and fifteen years old.
They are still clean in this photo as they were just
beginning their journey.
I should have taken an "after"...
the laundry room floor was the most disturbing! :) 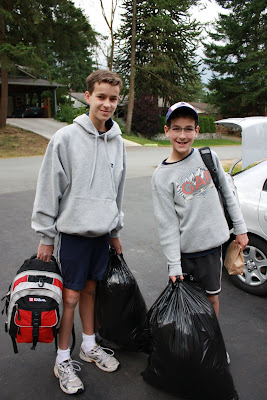 Last week, the boys were able to attend a "teen" camp
for the young people of our church.
It was the first time either of them had been away from us
for such an extended period of time.
They were gone four nights.

BUT...they had such a
WONDERFUL and ENCOURAGING time!

The LORD is so good to give these
opportunities.
We are thankful for the
Youth Pastor and his wife and their
influence in the lives of the teens of our church.

Many Blessings, Camille
Posted by Camille at 19.7.10 Labels: Austin, Calvin

OH my. I am learning they grow up all too soon. Where, oh where do the days go???

How wonderful they got some time away. Time spent with the young lady who mentored the girls in our church GREATLY influenced my life as a believer. She literally taught me how to walk in a relationship with Christ.

I hope your boys had a great time and that God was and is glorified in their time away!

I'm so glad your boys had fun at camp. I've been to a few church camps when I was younger. It was so much fun. I can remember being gone for about 7 days...or it seemed like 7 days when I was in high school...The boys would bring like one teeny tiny duffle bag the size of a water bottle with all their stuff for the week. The girls would bring SUITCASES...because we're girls and we want to look presentable :) :) All the boys had to help us carry the suitcases :) :)

Love and hugs from Oregon, Heather :)

First of all, thank you for keeping up with me. I know I have been negligent with my blog for various reasons...but you have been so sweet to just let me know you were thinking about me. I truly do appreciate that. I know what you mean about children going away. I felt that way when my oldest daughter spent the night with a friend! The home is just not the same without everyone around the table is it? I don't think I will enjoy that whole empty nester thing! Have a great week in the Lord my dear sister!

Yes, they grow so quickly!
Our daughter Amy was away at camp last week and our daughter Sarah is away at camp this week. I know they are having a fun time, but it is hard for us having them gone so long! :)

Oh Camille.. I so know how you feel..my youngest is 14 now.. and he too just got home from International Youth Convention. a 4 day church trip .He had a great time, but I missed him as well. He is my last child at home..so it is hard to let him grow up. He starts high school this year..and it seems like only yesterday that I told him I didnt want him to graduate elementary school cause once that happens they aren't your baby's any more.. no more going to eat lunch with them, and field trips..
Ok so hand me the Kleenex.. i just got myself all sad :( lol..
great post.. cute boys.. god bless.

Dear J ~ Oh how I am feeling it...the days ARE short and fleeting!! I must remind myself that it was only for four days and they haven't left home yet! But, oh how QUICKLY it all goes! How precious that you had the influence of a godly woman in your life...God is GOOD! It seems that the days at camp were beneficial for both the boys...we are thankful for the leaders who were with them. You are right...may the LORD be glorified in ALL we do!

Dear Heather ~ Thank you for your sweet encouragement...ANY good in us is because the LORD has done it!! How precious HE is!! May the LORD have the hearts of our children and may they ever life for HIM!

Dear Jackie ~ How WONDERFUL it is to hear from you!! I TOTALLY understand about the blog taking a back seat to THE IMPORTANT things of life!! I really do! I was glad to see you had been by for a visit...I enjoyed reading about your lovely holiday at "your place". How blessed we all are to belong to our precious Saviour! I trust you will all be well in the coming days with no more sickness anytime soon!! :)

Dear Nadine ~ How you must miss them!! I can completely understand! Enjoy your reunion this weekend! :)

Dear Karen ~ Thank you! Now you are going to have to pass me the Kleenex! ;-) Don't get me started!! Enjoy these days with your boy...how precious they are!! I always remember my Mum-in-Love saying that we ought to enjoy each Season of life as the LORD sends it...embrace the changes and fully enter into it all! We are not to wish our lives away or pine for what is gone...enjoy each day as it comes and the precious moments from HIM! How I need to continually remind myself of this!! :)

Blessings to you each one!
In Him,
Camille

What precious pictures. I love then and now pictures. Whenever I look back at pictures I think how young my children look. But at the time they seemed so grown up :-)

Oh Cinnamon...I COMPLETELY know where you are coming from on that one! WHERE does the time go??? Sometimes I would like to have been able to "freeze" them in a certain stage, but that would not REALLY be the answer, would it?! :)

Don't our children grow up quickly? We are now enjoying watching our grands grow up...and I think they do it even more quickly than our kids did. Children truly are an heritage from the Lord.

Oh Dianna, they really ARE a blessing from our LORD's hands!! How sorry I am to hear that the grandchildren even grow up more quickly than the children...BUT...how precious that you are able to be involved in their lives! Thanks for the reminder to enjoy this moment, this day!

Blessings to you!
Camille